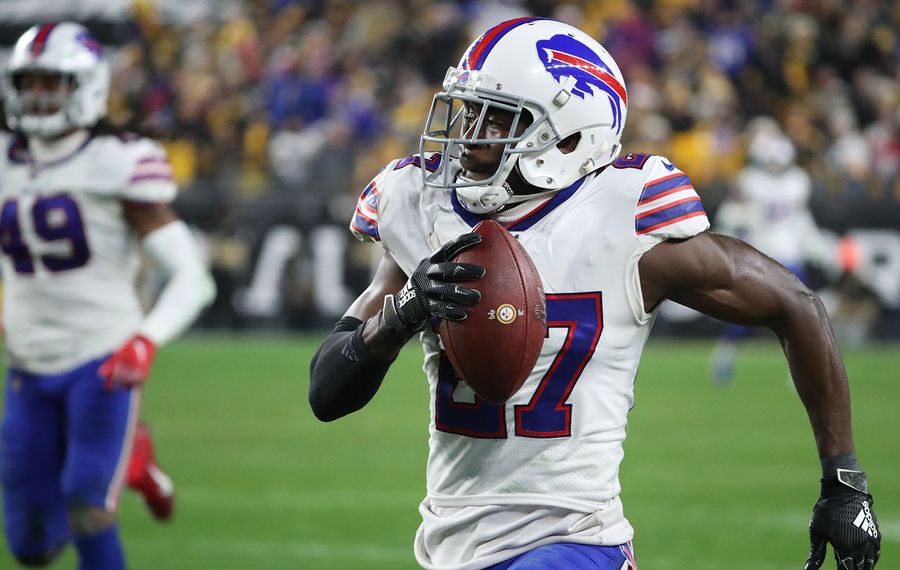 PITTSBURGH – The Buffalo Bills needed someone to make a play.

Nobody on offense seemed up to the task. Ditto for special teams.

Leave it to the defense, then. Specifically, leave it to Tre’Davious White.

The Buffalo Bills’ No. 1 cornerback delivered yet again Sunday night, making a pair of interceptions in his team’s playoff-clinching, 17-10 win over the Pittsburgh Steelers  at Heinz Field.

At this point, if White doesn’t make the Pro Bowl, there should be a congressional inquiry. The third-year cornerback now has a career-high six interceptions this season. Nobody else on the team has more than one.

His six interceptions are also tied for the NFL lead with Patriots cornerback Stephon Gilmore.

"I'm mad because I could have had seven," he said. "It's pretty dope, man. The guys up front, they've been doing a great job all year for us to stay over the top of receivers and getting the quarterback to be under pressure. They just throw the ball up and we're able to make plays."

White’s first pick came in the first quarter, ending the Steelers’ first possession. His next was bigger: With the Steelers holding a 10-7 lead late in the third quarter, White stepped in front of Diontae Johnson on an out route, intercepting Devlin Hodges and returning the ball 49 yards to the Steelers’ 18-yard line.

The only down side on the play is White wasn't able to reach the end zone.

"Those guys are going to give me a hard time, because it wasn't a skill person that got that" tackle, he said of his teammates.

Regardless, the play at least put the Bills in position to tie the game, which it did on a 36-yard field goal by Stephen Hauschka -- all thanks to White.

2. You weren’t alone if you felt like 8:20 p.m. Sunday was a long time coming. The big stage of Sunday Night Football is one the Bills are not accustomed to. Until their meeting with the Pittsburgh Steelers at Heinz Field, it had been since 2007 when the team played in the league’s marquee time slot.

As creatures of habit, a kickoff that’s more than seven hours later than normal is a fairly big change.

"You have to “understand that your pre-game routine is going to change or be pushed back a bit,” center Mitch Morse said. “You talk to the coaches and you go accordingly and understand that there's going to be a lot of time, don't play the game before the game.”

That, of course, can be a good thing or bad thing.

“Depends on how you handle it. Sometimes when you think too much about it, it can mess with you, but as long as you handle it the right way, you’ll be OK,” Lotulelei said. “You have a routine for night games just like you have a routine for 1 o'clock games, even though we don't play that many night games here. Everybody has been there before, so they know how to handle it. It's football. Pretty much just making sure your mind's right and your body's rested up.”

Night games are more of the norm in college, so preparing for the later start isn’t that big of an adjustment for players.

“The only thing that changes is Sunday,” safety Micah Hyde said. “I've played some night games in the past, it's not really that big of a difference.

Tight end Tyler Kroft, who caught the game-winning touchdown, said he planned to wake up Sunday within about a half hour of his usual time so that his internal body clock wasn’t thrown off.

“It's more about getting your body right and making sure you're feeling good,” he said. “It's a little different when you have more time. You don't want to just lay around and get tight. I make sure I get up on my feet and I'm moving around a little bit just to not get too tight. I try and follow the same routine. For me, being my fifth year in the league, it doesn't really affect me as far as it being a night game as opposed to a 1 o'clock game. Coming from college, we've kind of learned those routines already.”

“It's always fun to be on prime-time TV,” Lotulelei said. “A lot of guys like to have fun, like when we played in the Thanksgiving game. You saw all the guys on camera having fun. It's always a little bit more exciting.”

3. Josh Allen’s interception in the first half by Steelers cornerback Steven Nelson first bounced off the hands of Bills receiver Cole Beasley. The debate on Twitter started immediately: Was Allen at fault for throwing a ball that was too high, or should Beasley have made the play? For what it’s worth, four Buffalo News reporters were at Sunday’s game. They were split evenly, with two of them thinking the throw was too high and two of them thinking Beasley should have caught it.

Beasley finished with just one catch for 6 yards despite being targeted six times.

4. Defensive end Trent Murphy has had a tough season, but he made a big play in the second quarter. Murphy forced a fumble by Johnson that came on a handoff from James Conner out of the Wildcat formation, with safety Jordan Poyer making the recovery.

That wasn’t Poyer’s biggest play of the game, though. That came in the fourth quarter, when he intercepted Hodges in the Bills’ end zone on a fourth-and-7 play from the Buffalo 23-yard line. The pass was intended for wide receiver Deon Cain.

Cornerback Levi Wallace also got into the act, making his first career interception on the Steelers' last-gasp drive — the fourth pick of the game thrown by Hodges.

6. Right guard Jon Feliciano left the game in the fourth quarter with leg cramps. He was announced as being questionable to return but was back on the field for the next offensive series.

7. Complaining about the officials is generally nauseating. The Bills, though, had a legitimate case. Middle linebacker Tremaine Edmunds was called for a facemask in the second quarter against Kerrith Whyte Jr. that gave the Steelers a first-and-goal at the Bills’ 10-yard line. Replays showed that Edmunds came nowhere near Whyte’s facemask. A minute later, referee Tony Corrente announced a correction – the penalty was on cornerback Kevin Johnson. The only problem: Johnson didn’t appear to grab Whyte’s facemask, either.

It ended up not mattering when Murphy forced the fumble on the next play, but it wasn’t a good look for the officials.

8. The Bills entered Sunday night’s game with a 5-1 record on the road. With the win, they have won six of their first seven road games for the first time since 1964. They have only won six road games in a season four times, with this season and 1964, joining 1991 and '93.

“On the road, it just seems like everyone is against us. … We live for those types of moments,”  Brown said.

Hyde said that tone was set even before the regular season started.

“Going on the road for the joint practices in Carolina, getting that win-on-the-road mentality going. it's held true in the regular season,” he said. It’s about “sticking together and trying to gut out with a win.”

9. The Bills had to dip into their defensive line depth for Sunday’s game. Defensive tackle Corey Liuget was inactive due to a sore knee that bothered him this week. That meant 311-pound, third-year backup Vincent Taylor was active as the fourth defensive tackle. Stopping the Steelers' run game was a top priority. Taylor played in one game this year, against Washington, but has been inactive the past five weeks.

Tackle Ty Nsekhe missed his fourth straight game due to an ankle injury, with rookie Cody Ford once again going the whole game at right tackle.

Yeldon and Marlowe each missed their ninth straight game as healthy inactives, while Williams sat for the seventh straight game. Marlowe has been inactive for five of the past six games, while Boettger has played just once this season.