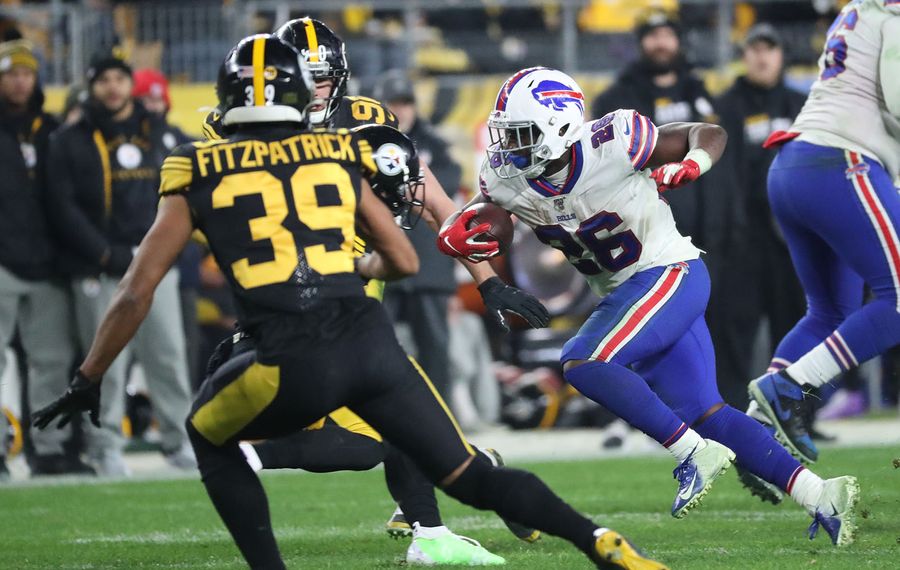 Theme: Let the punts begin. The Bills punted twice, the Steelers once in a scoreless quarter.

Key play: Steelers punter Jordan Berry hit a punt 40 yards high but only 20 yards downfield to give the Bills possession at the Pittsburgh 40 late in the quarter.

Turnover No. 1: Tre’Davious White intercepted a lofted pass down the right sideline by Devlin Hodges at the Buffalo 25 to stop the Steelers’ first drive. Hodges’ limited arm strength showed. He heaved the ball for James Washington but it hung up in the air into double coverage for a relatively easy pickoff. It was White’s fifth INT of the season.

Matchup watch: The Steelers’ cornerbacks play sides. No. 1 CB Joe Haden stayed on the left side and did not follow John Brown around.

No. 9 for No. 17: Allen’s touchdown run off left tackle was his ninth of the season, tops among NFL quarterbacks. His 17 TDs also lead all NFL quarterbacks the past two seasons. Counting rushing and passing, it gave him 26 TDs vs. eight interceptions.

Missed opportunity: The Bills punted from midfield midway through the quarter and had a chance to pin the Steelers deep. But Corey Bojorquez’s punt was a semi-shank to the open side of the field with only a 3.9-second hang time. It was returned 13 yards to the Steelers’ 26.

Mixing personnel: The Bills gave right tackle Cody Ford help vs. Steelers sackmaster T.J. Watt. How? By using more two-back sets and a handful of two-tight-end sets. That put an extra blocker on Watt’s side or an extra blocker in the backfield.

Turnover battle: A too-high Allen pass for Cole Beasley over the middle was intercepted by Steven Nelson and returned 33 yards to the Bills’ 20. But the Steelers gave the ball back when Trent Murphy forced a fumble that the Bills recovered at the Buffalo 9.

Steeler score: Conner made Micah Hyde miss at the line of scrimmage on a 17-yard run to the Buffalo 10. Then Conner caught a swing pass to the right and broke a tackle attempt by Levi Wallace at the 6 to rumble to the right side of the end zone for a touchdown. It gave the Steelers a 10-7 lead with 11:18 left.

Big play: Tre’Davious White intercepted a Devlin Hodges pass on an out route along the right sideline and returned it 49 yards to the Steelers’ 18.

Going backward: The Bills’ second drive of the quarter was thwarted before it started when Dion Dawkins was flagged for an illegal block in the back penalty on first down from the Bills’ 36.

Puntapalooza: The Bills entered the game having forced 72 punts, second most by any team behind New England (73). The Steelers punted three times in the first three quarters.

Theme: The Bills are in the playoffs.

Key play: Tyler Kroft only had caught four passes in the past eight games since being activated to the roster. But his fifth catch was huge, a 14-yard touchdown to the right side of the end zone.

Final nail: It wasn’t over until Levi Wallace picked off a weak Devlin Hodges throw into the end zone with 6 seconds left.

Key punt: Corey Bojorquez hit a 52-yard punt to pin the Steelers back to their 19 for their second-last drive.

Good night: In night games, the Steelers dropped to 41-21 under Mike Tomin and 28-10 at Heinz Field.

Series: It was only the Bills’ third game in Pittsburgh in the last 23 years. The Steelers lead the series 16-10, including playoff games. The Bills are just 3-10 in Pittsburgh, but the three wins are memorable: O.J. Simpson’s 227-yard rushing day in 1975, Frank Reich’s playoff win in the ’92 season and Sunday’s playoff clincher.