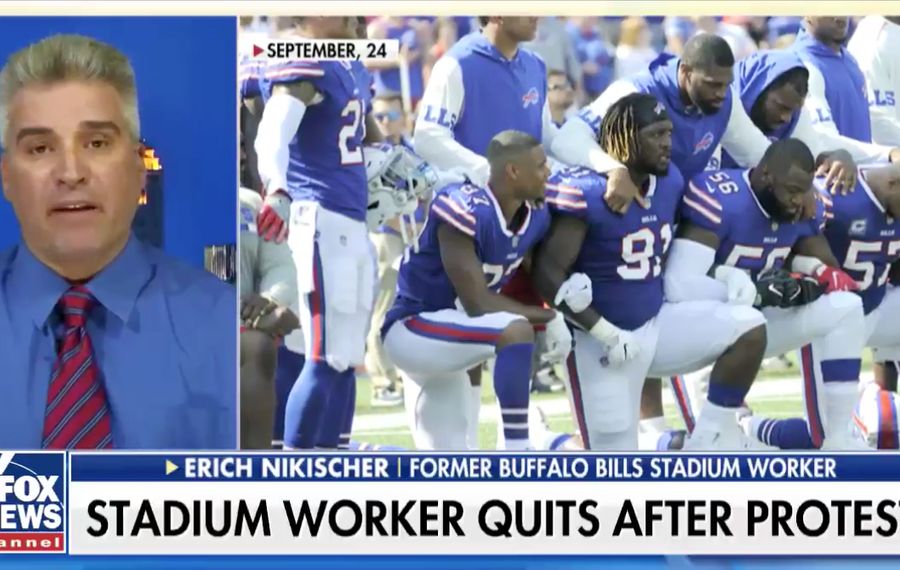 A West Seneca man who drew national attention when he quit his job at New Era Field over Buffalo Bills players’ protests during the national anthem was sentenced to three years' probation for a misdemeanor domestic violence charge.

Nikischer, 51, who was accused of choking a woman and putting a gun to her head, was acquitted in October of a felony weapons possession charge after a two-day bench trial.

Before the sentence was issued, Nikischer apologized to the victim for what he described as his actions leading up to the events of Aug. 2. Scott F. Riordan, Nikischer's defense attorney, told the judge he advised his client not to make any reference to the events that happened that resulted in the charges, in case he appeals the case.

Nikischer also said he was working on regaining his sobriety.

“The old Erich wasn’t the best version of me,” he told the judge.

Prosecutors asked the judge to issue a sentence with some form of incarceration, but individuals in cases like these who are facing their first conviction are typically given probation, the judge said in court.

On Friday, Montour also issued two orders of protection barring Nikischer from having contact with the victim and a second woman. The orders are in effect for five years. The judge also ordered him to participate in a 40-week domestic violence program and to continue mental health counseling.

Before Montour issued the sentence, Assistant District Attorney Rebecca L. Schnirel asked the judge not to consider Nikischer’s job title when making his decision. The only bearing his employment should have is when looking at his conduct, Schnirel said.

“He should have known better,” she told the judge.

In issuing both the sentence of probation and the orders of protection, Montour told Nikischer he was treating him like he would others in the same circumstances, despite his employment as a law enforcement officer.

“I intend to treat you no differently than anyone else,” Montour said just prior to issuing his sentence.

The orders of protection prohibit Nikischer from possessing a firearm for five years, but a person who can’t legally possess a gun still may be employed as a court officer, according to a spokesman for the court system.

Nikischer was arrested Aug. 2 at a West Seneca residence. The victim escaped from the home and flagged down a passing driver, who called 911, prosecutors previously said. The weapons charge stemmed from the allegation Nikischer possessed a loaded gun to unlawfully use against another person. Nikischer had been a free man since the verdict, since the judge released him on own recognizance.

During the third week of the Bills' 2017 season before a game in Orchard Park against the Denver Broncos, Nikischer quit his security job at the stadium after some players on the Bills knelt in protest during the national anthem, he previously told WGRZ-TV.

“During the national anthem … the song that is about our country, our veterans that fight and die for us, it's just something I feel you shouldn't disrespect that way,” he told the local NBC affiliate after the game. "I believe people have the right to protest; I just don't believe that's the proper venue for it.”

No decision had been made on Nikischer’s employment status going forward after his conviction, but it will be reviewed following sentencing, according to a state court spokesman.

Montour told those in his courtroom he often sees in cases the fear, anxiety and depression exhibited by victims of domestic violence, which manifests in the forms of abuse including power, control, manipulation and physical contact.

The judge also said he received letters from some of Nikischer’s coworkers, friends and relatives attesting to his character.

Often times, the judge said, individuals who exhibit power and control have the ability to portray an image to others outside their home something different than what’s really going on.

“And that’s a form of manipulation,” the judge said.

For information about Child and Family Services' Haven House, go to cfsbny.org/programs/haven-house/.