You want a connection between eras for the Buffalo Sabres? Before he took the job as the team's new coach, Ralph Krueger went to two alums that he had long relationships with for their opinions.

Miroslav Satan was Krueger's GM for Team Europe in the World Cup in 2016. Uwe Krupp was a 19-year-old when he first met Krueger on the German National Team for the 1986 World Championships. Back then, Krueger was 27 and one of the team's older players.

Around seven months ago, both gave their highest recommendations to the city and organization they once called home.

"I said, 'You're going to love it here. The hockey aspect, you're going to go to a great setup with everything going to be on a very a high level,' " Krupp recalled Thursday night in KeyBank Center prior to the Sabres' 1980s/Memorial Auditorium tribute.

"The part it was important for me to tell Ralph because he's a very people-oriented person is that he's going to love the people. Western New Yorkers are a special brand. They're open, down to earth, love their hockey and love the Sabres. And for him, I knew he would be coming to a great place."

Krueger, remember, stalked around town anonymously over a May weekend to get a feel for the place from a hockey standpoint and to make sure it would be a fit for his wife. He liked the sports vibe, the cultural vibe, the restaurant scene and the watering holes.

Krueger has been proud to wear the Sabres logo. He's talked openly how it meant the world to him to represent it in Sweden and again Sunday night in Edmonton, where he was foolishly fired six years ago.

Understanding the logo means a lot is important in this 50th anniversary season. Krueger has gotten that point through to his players and they're embracing it in little ways, like Jack Eichel wearing a royal blue cap while talking to reporters after Thursday's game, and in big ways like the manner in which they're performing on the ice. 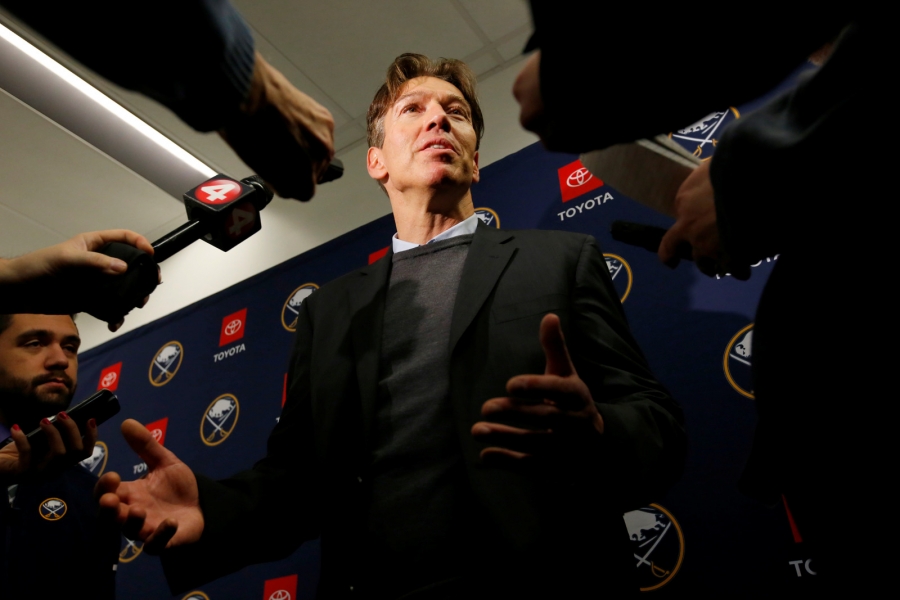 Buffalo Sabres alumni member Uwe Krupp meets with the media prior to the Sabres playing the Nashville Predators at the KeyBank Center on Thursday, Dec. 12, 2019. (Harry Scull Jr./Buffalo News)

Krueger admitted not knowing much about the legacy of the Aud until this week, when the team showed up for practice Wednesday and saw the seats decorated in the famous colors of the old barn's sections.

It sure sounded like the Aud a lot Thursday night. Audio of tenor Joe Byron and organist Norm Wullen on the Star-Spangled Banner. The classic bass of Milt Ellis on the PA to tell fans it was time "for the following lineup changes" and that it was the "last minute of play in regulation time."

And there was that roar.

The Vault is rarely full anymore -- the tickets-sold count was roughly 1,900 shy of a sellout -- but the noise level can still get Aud-like at times. And there was no shortage of support from the paying customers during the entertaining 4-3 win over Nashville.

The Sabres have won three straight overall and are 10-2-3 downtown this year (one loss to Tampa Bay in Sweden, remember, is counted in the standings as a "home" defeat).

The "Let's Go Buff-a-lo" chant that followed Victor Olofsson's go-ahead goal in the third period was more than plenty loud. And it resurfaced in the last minute when the Sabres expertly managed Nashville's futile 6-on-5 push to get a tying goal.

The fans clearly enjoyed the night, seeing the likes of Krupp, Dave Andreychuk, Mike Foligno and many others around the building. And the present guys did their part as well.

"Having the alumni around adds a little bit extra energy in the building," Eichel said. "Obviously in our locker room it adds a little more energy. We've done a good job feeding off this year and trying to come out and perform well for our fans."

It's good to finally see this becoming a hard place for visitors to play. It's long overdue. You could never get two points out of the Aud easily and the alums' memories of the building never get old. Krueger said Krupp "spoke proudly" about his time in Buffalo and that Satan had similar sentiments.

"Uwe just remembers coming here as a young player and did all his maturing and growing and educating here during his career and how the people of the city, the fans and the organization embraced him as he grew up," Krueger said of the 54-year-old Krupp, now a coach in the Czech League. "He went on to become a Stanley Cup champion, score the winning goal (in triple overtime for Colorado in 1996) and all that. Both of them gave huge positive feedback to what I would experience here -- and actually it's been way better than they even said."

"I lived with my parents and coming to Buffalo was moving away from home, playing hockey at a completely different level, learning a new language," Krupp recalled. "It was a wide spectrum of adjustments. Coming to Buffalo was special in that the environment that was set up in the Sabres organization and the people of Western New York, it was a real safety net. It was a special time."

It's Krueger who is in charge of creating special times now. It was seemingly a bizarre out-of-the-box choice by GM Jason Botterill, an act of desperation to do something -- anything -- different.

But there were lots of folks who had bought into Krueger long ago.

"He's a unique guy with a track record of having a very focused approach," Krupp said. "He definitely is somebody who thinks before he talks. I think he will mesh very well with a young team here that's going to grow and get better."

As Sabres prep for Aud night, a 2009 video farewell of fond memories, demolition