The school day usually begins each morning at the kitchen table for Susan Walterich and her 12-year-old son, who are settling into their first year of home-schooling.

They start with the latest book they’re reading before moving into vocabulary or grammar or spelling. Next, it’s on to U.S. geography, then a short break.

“After his break, we always do at least an hour of math,” said Walterich, of Hamburg.

Home-schooling – a way of life for more than 1,900 kids across Erie and Niagara counties last year – has long been part of the educational landscape, but it’s gotten some renewed attention this year.

The state cracked down on childhood vaccinations required for school and eliminated the religious exemption for some 26,000 students across New York.

That triggered a polarizing debate and put some parents in a tough spot: Either get their kids caught up on their shots, or the kids wouldn’t be allowed back in school.

“What else can you do?” said Walterich, who stopped vaccinating her son Brendan when he was diagnosed with autism at age 2. “My stance didn’t change because of the law.”

Home-schooling had never been on Jina Gentry’s agenda, either, but eliminating the religious exemption prompted the Amherst mother of four to home-school this year.

“I think it definitely has sparked an increase in home-schooling,” Gentry said. “I know multiple people who are home-schooling now that had been sending their kids to school.”

[RELATED: Schools' religious exemptions are gone. So are many students.]

Figures from the state Education Department show 1,923 kids in Erie and Niagara counties were home-schooled last year – 1,014 in grades K to six and 909 in grades seven to 12.

State data for this year is not available yet, but the New York State School Boards Association said anecdotally some districts were reporting a “slight increase” in home-schoolers.

In fact, home-schooling veterans such as Dan DiFrancesco spent the summer providing guidance to many parents considering the idea.

DiFrancesco is the regional representative for the state chapter of Loving Education at Home, a Christian-based home-schooling support group.

The first step, he explained, is to submit to the local school district a letter of intent to home-school. That's followed by a more detailed individualized home-instruction plan with a syllabus and list of curriculum materials for each course.

The state also requires quarterly progress reports with the total hours of instruction.

Annual assessments are needed, too. That means taking one of several state-approved standardized tests or, as a possible alternative, submitting a written evaluation prepared by a certified teacher, peer review panel or someone approved by the local superintendent.

Students who complete their education at home don’t qualify for a local or Regents diploma in New York, though some may choose to get their general equivalency diplomas or obtain a letter of proof from the district superintendent or take the SATs to apply to college.

“Our personal experience has been wonderful,” said DiFrancesco, of North Tonawanda, who started home-schooling his children with his wife in 2001.

“It’s provided a lot of freedom,” DiFrancesco said. “One of the benefits is the student will learn at their own pace. If a student is very bright and very advanced, being in a classroom setting can be very frustrating. Similarly, if a student has additional needs that may not be met in a classroom setting, the focused attention for a parent is beneficial.”

But he also offers words of caution to new home-schooling parents.

“I’ll admit, it’s challenging enough when you are committed to home-schooling – not that it’s a burden, but it’s work,” DiFrancesco said.

“For those who are forced into it because other options are taken away, I’m personally concerned for them,” he said. “I wouldn’t want to grudgingly approach that process every day.” 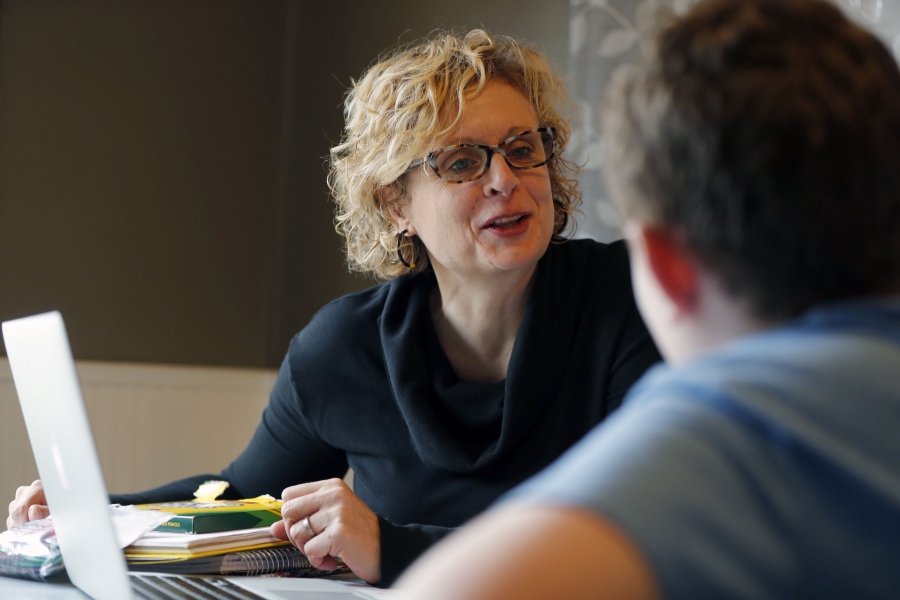 Brendan, who is home-schooled by his mother, Susan Walterich, likes his teacher and thinks she’s “really smart.” (Mark Mulville/Buffalo News)

Neither Walterich nor Gentry jumped into home-schooling lightly.

Gentry, 37, still works during the day as a literacy coach while her mother watches the four kids, who range in age from 7 down to 1.

Gentry then home-schools her two daughters, who are in first and second grade, during the evenings and on weekends.

“You can imagine they were used to going to school during the day and coming home and being able to play, so now it has kind of flip-flopped,” Gentry said.

As far as instruction, the curriculum Gentry uses provides the lesson plans and the manual on what to teach.

But there are challenges.

“Now, instead of dealing with someone else’s children you’re dealing with your own children," Gentry said. "So there’s that struggle at times.”

It also hurts Gentry that her kids won’t get to participate in school activities, as she did. And she acknowledged it’s a lot of responsibility for a working mom who feels she has no other options.

Walterich, meanwhile, decided to quit her job as a school librarian so she could home-school her son.

Like Gentry, Walterich, 46, feels her background in education gave her a bit of an advantage knowing what her child should be learning and what she should be teaching.

On a recent morning, Walterich and Brendan were in their kitchen, where a laptop sat on the table along with an opened spiral notebook and the latest book they’re reading – the young adult novel “Holes.”

A calendar was stuck to the wall with his weekly schedule of activities.

On Tuesdays, he takes swim lessons.

On Wednesdays, he’s in a home-school group, where he’s learning Spanish.

On Thursdays, the two try to get outdoors for a hike.

"It's a balance,” Walterich said. “I know a lot of people try to do a lot of things, but I didn’t want to do too much because you still need to focus on school.”

Walterich picked up a job as a librarian on Fridays, so they make up their instruction time on Sundays.

“He loves it,” Walterich said. “He really is happy. I’m actually surprised. When we told him he couldn’t go to school, he cried for about 20 minutes, but since then he never looked back.”

But, she said, it also has been a huge life adjustment.

The family has talked about their options for the future, including moving to another state where there still are exemptions for school vaccinations. She's holding out hope that with enough pressure New York might change the law.

So for this year, Walterich is locked into home-schooling.

Brendan said the experience is different than going to school – but he likes it.

And he likes his teacher.

“She is really smart,” he said.