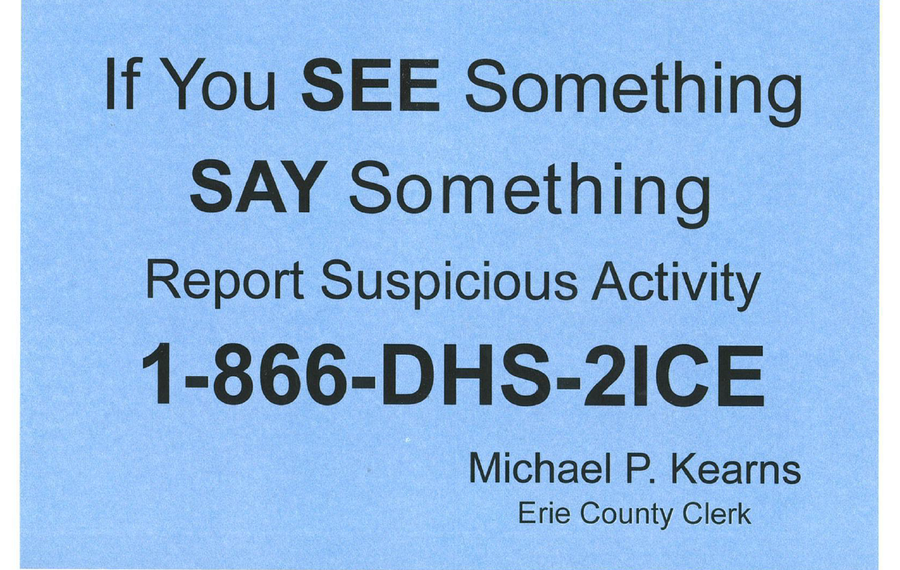 Erie County Clerk Michael "Mickey" Kearns said Wednesday that he will take down and replace the signs at county auto bureaus that use the trademarked expression, "If you see something, say something."

The signs posted last week included the slogan, along with the tip line phone number for the Department of Homeland Security.

They were posted by the County Clerk's Office to discourage immigrants living here illegally from applying for driver's licenses under the state's new Green Light law and to encourage other residents to report them.

Kearns said he confirmed Wednesday that the often-used expression is trademarked by the New York City Metropolitan Transportation Authority. He intends to put up new signs that do not invoke the trademarked slogan.

The MTA issued cease-and-desist letters on Tuesday to both Kearns and Niagara County Clerk Joseph Jastrzemski ordering them to stop using the slogan. MTA officials described the signs as "illegal" and "abhorrent."

Jastrzemski said Wednesday that he has also taken the signs down at his three Niagara County auto bureaus.