If you’re watching a Christmas movie on television and think that picturesque small town looks a lot like East Aurora, chances are you’re right.

With the recent premiere of “A Christmas Princess,” ION Television is now showing three locally made holiday movies, all from director Fred Olen Ray. In each, East Aurora has a starring role, with other localities in the mix.

Among the sights you’ll see in “A Christmas Princess,”  “A Prince for Christmas” (2015) and “Christmas in Vermont” (2016) are Vidler’s, the Aurora Theatre, the quaint Main Street business district, Knox Farm State Park and the Roycroft.

Why East Aurora? Credit the village’s small-town charm that is essential to many holiday television movies.

“We’re very fortunate to have the kind of Main Street we do — the shops, the lighting and the brick pavement, which adds to that Norman Rockwell-type of feel to it,” said Gary Grote, executive director of the Greater East Aurora Chamber of Commerce.

"It looks like it just jumped out of a Norman Rockwell painting and that’s what most of these filmmaker and producers like," Clark said. "With the red brick street, old five and dime and the Aurora Theater marquee that jets out over main street, it’s a perfect setting. And because it is in a snow belt, there is a likely chance to get snow as a backdrop, which is important to the Christmas movies."

Local viewers aren't the only ones noticing East Aurora.

Don Vidler, co-owner of Vidler’s, has had friends call him from the West Coast because they thought they saw his store in a movie (they did).

“I’m very flattered they think we are appropriate as far as a small-town family owned business,” Vidler said about filmmakers who chose to give his family business (and its familiar red and white awning) a role in the spotlight. “A Christmas Princess” also filmed inside and captured a favorite spot for shoppers: the vintage candy area.

“We have people coming into our office because they’ve seen these movies and want to see East Aurora. They want to see Vidler’s and the shops,” said Grote, who then recounted a story of visitors from Pittsburgh who were in the Bar Bill. “They said they saw a movie on Lifetime and saw a great community and wanted to see it. We know that happens and there is a value through the economic industry.”

And it’s the gift that keeps on giving. Local actress Mary Kate O’Connell who co-starred in “A Prince for Christmas,” said she hears from people each season when the movies are repeated.

“At this time of year, the movies are on frequently, and I’m always getting excited messages like, ‘Hey, you’re on TV,’  ‘Love this movie’ or ‘This is the 5th time watching this movie.’ I just love that it makes people smile and feel good at holiday time,” O’Connell said, calling “A Prince for Christmas” the “ultimate love letter to East Aurora.” 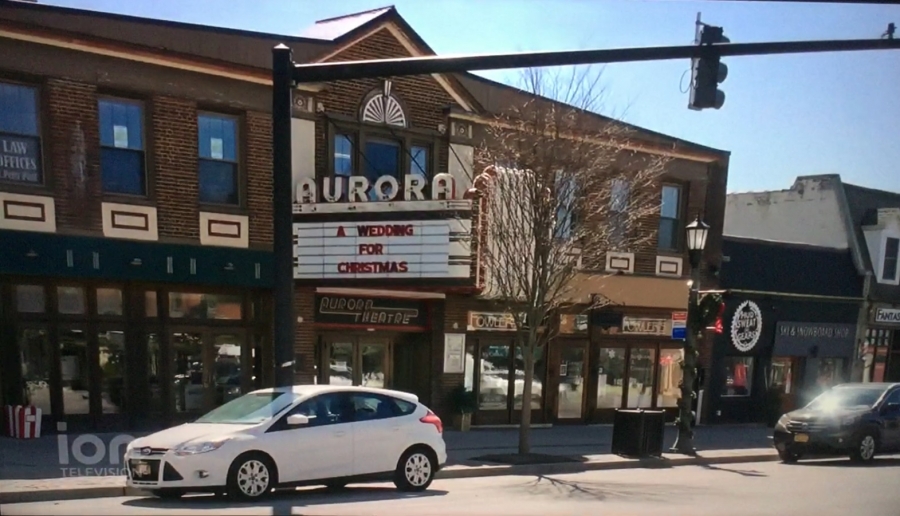 The Aurora Theatre has been seen in three holiday movies. In "A Christmas Princess," the marquee bears the title of another film by director Fred Olen Ray.

"It is fun to see the Aurora on TV and on the big screen especially for people who live in the community and have been patrons for many years," said Lynn Kinsella, owner of the Aurora Theatre, which has been used in the three holiday movies and William Fichtner's "Cold Brook." "The role that The Aurora plays when filmmakers are looking for that perfect setting is also very important. We hope to think that our theater has been one of the reasons why film makers choose East Aurora for their movies."

Vidler even had a role in "A Christmas in Vermont." "I was typecast as the friendly store manager, Phil. I had three speaking lines," he laughed, adding he did get to hang out with the stars including Howard Hesseman ("WKRP in Cincinnati").

A hint that a movie may be filming is Christmas decor at an unusual time of year. For “A Prince for Christmas” in 2015, Valentine decorations were replaced by snowman décor at the Colden Country Kitchen.

While we know how to dress for our fickle winter weather, it can be tricky for out-of-towners, including a crew from California surprised by bitter temperatures hovering around 10 degrees. “They weren’t ready for the cold, so they bought coats, hats gloves from local retailers," Grote said. "That economic kick start helps merchants especially during the slow time of January, February and March.”

Yet it was one of the warmest months on record during the filming of “Christmas in Vermont,” Don Vidler recalls. “The actors were in winter gear and it was 55 degrees and sunny.”

Though we may watch these movies as entertainment, in the end they have become a source of community pride.

“I love that Western New York is so beautifully represented in these movies,”’ O’Connell said. “Buffalo loves to be proud of Buffalo. I believe that all the movies that are shot here give a community lift to all of us and a very special feeling of Western New York pride."

Oh, you'll have more to watch next holiday season: Olen Ray will be back in early 2020 filming another Christmas movie. 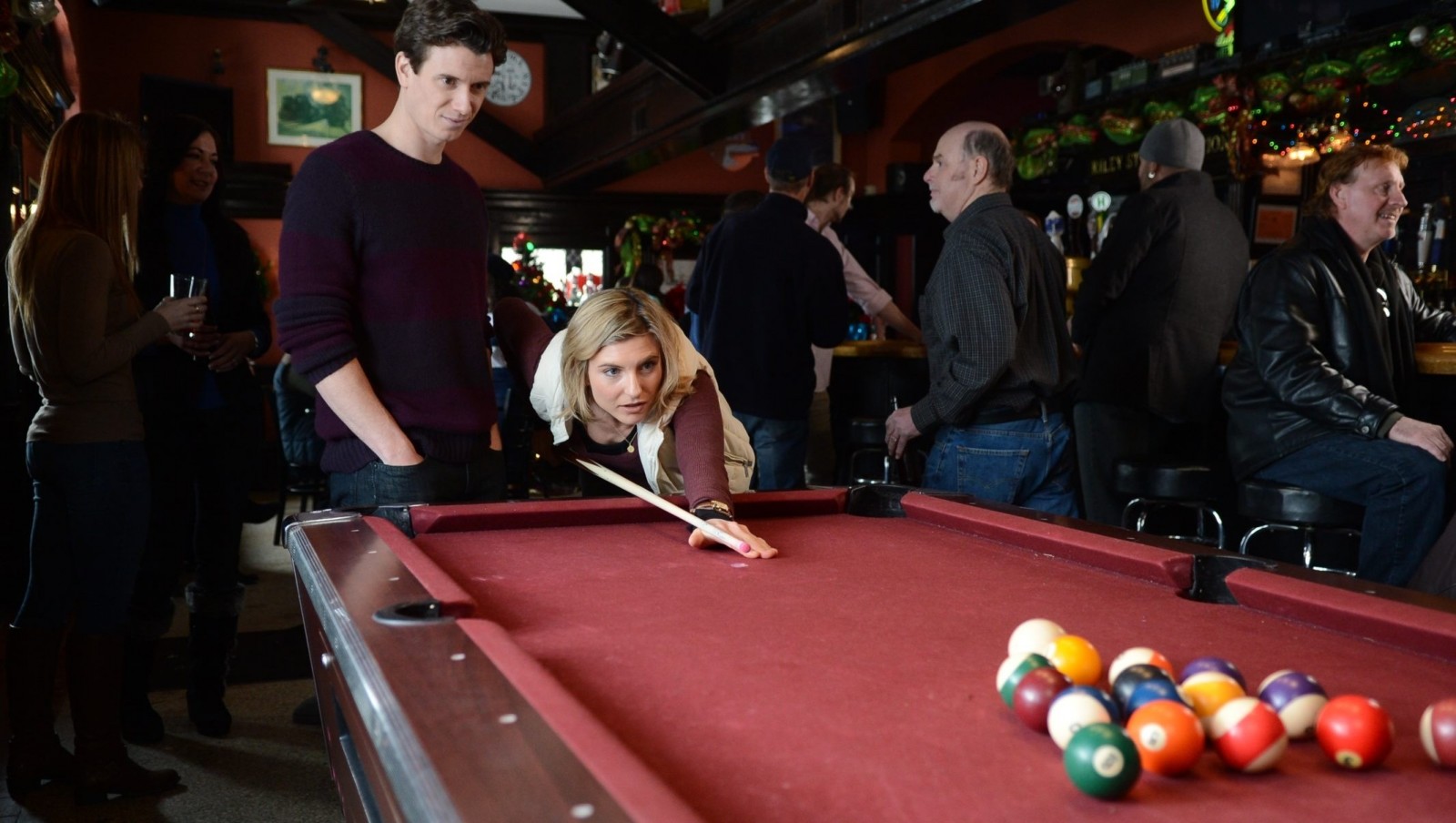 In this scene from "A Prince for Christmas," stars Kirk Barker and Viva Bianca are shooting pool in Riley Street Station in East Aurora.

Story: A visiting young prince happens upon the Brooklyn business of a struggling restaurateur and asks her to cater a royal holiday fundraiser.

Look for: Vidler’s exterior, as well as interior scenes in the candy department; Main Street businesses including the Aurora Theatre. The Black Sheep in Buffalo was used as the restaurant (you can see The Black Sheep’s name in some shots); Hotel @ the Lafayette (exterior, lobby and the former Bourbon and Butter restaurant) and the Brisbane Building.

Story: East Aurora stands in for Vermont. An executive sent to shut down a factory at Christmas, plays along when the town thinks she is there to save it. Starring Abigail Hawk, David O’Donnell and Howard Hesseman.

Look for: The Roycroft, locations in Ellicottville including the main shopping district and Holiday Valley; Buffalo and Erie County Botanical Gardens and Buffalo History Museum.

Story: A vacationing prince, troubled by an impending arranged marriage, meets a struggling waitress when his car breaks down near a small town.

Look for: Exteriors of Vidler’s and other Main Street businesses are all evident. The bar scene is in Riley Street Station; the sledding scenes are at Elma Meadows; an interior castle shots is at Knox Estate summer house. The Park Country Club stands in for a European Castle. Also: the Colden Country Kitchen, the Old Orchard Inn, Arcade and Attica Depot.