It takes a village to keep a pizza parlor alive. To maintain fine dining restaurants in good health takes a city. Once you stray beyond metro limits, the opportunities for enjoying creative scratch dining are rare. Communities rally around institutions that they want to preserve against economic and demographic threats, like theaters and museums.

Arriving in Jamestown, I gave thanks for the customers who have kept Forte around.

Next door to a 1920s vaudeville house restored as the Reg Lenna Center for the Arts, Forte offers a maroon room with period accents and a bootlegger’s swagger. With owner Peggy Kaltenmeier at the helm since 2006, Forte is the restaurant that introduced Jamestown to sushi – and the curry chicken pot pie.

In a town with a smattering of ethnic cuisine – Italian, Mexican, a Cuban, and an ambiguously Asian effort – Forte is the go-to for fluently worldly food, made well.

A few blocks from the National Comedy Center, Forte has the polish and range to fuel a big night out, whether pre-show or apres-giggles. It accommodated two juvenile diners smoothly, staffers answering extra questions with aplomb and producing a chicken sandwich that met precise nonstandard specifications.

A window seat, with paper over tablecloth, set with tealight, pepper grinder and canister of Jamestown’s A.A. Borsari artisanal seasoned salt, is my candidate for the finest table in Chautauqua County.

Frequent menu changes keep the Forte experience fresh. There’s Thai spices in the Penang seafood risotto ($27) now, but it was a Cajun-style jambalaya when I visited at the end of September. 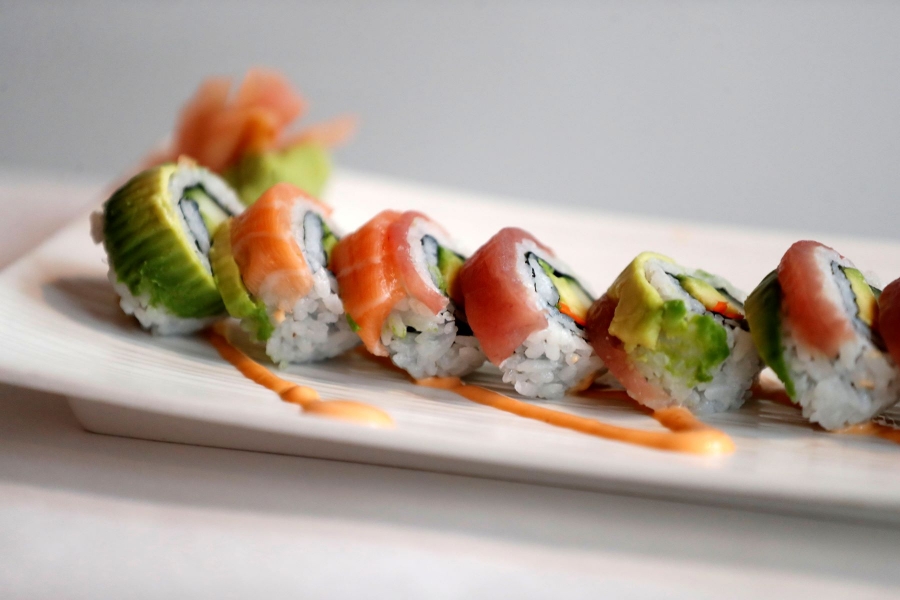 Today’s pork chop ($28) has a Mexican angle, stuffed with chorizo, cheddar and poblano, and served with salsa verde. Mine wore a Jamaican jerk coat, lively with black pepper and allspice, accompanied by vibrant pineapple-jalapeno salsa.

Fried calamari – rings and tentacles – and cauliflower, all dusted in piquant red-hot seasoning powder, could be dunked in glorious smoked blue cheese dip ($12). Lightly pickled matchsticked carrots added tang and vitamins. This plate shone for a fresh take on the calamari clichés, and advancement in its field (calamari coating doesn’t take well to moisture, so a spice dust is a canny dodge).

A wedge of brie baked with strawberry jam and nonlocal strawberries ($10), served with towers of crostini, was delicious. Its jam-gone-big-city flavor had me craving a mug of black coffee. 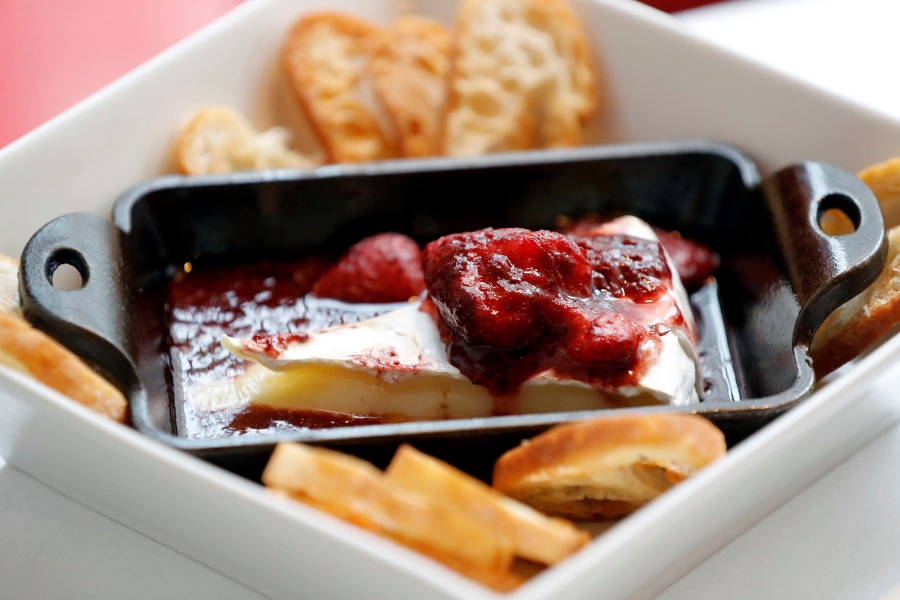 A rainbow roll ($15) was decked out in a red-orange-green palette of tuna, salmon and avocado, wrapped around a fresh core of cucumber, carrot and tempura flakes. A spicy salmon roll ($12), filled with buttery fish and crunchy tempura flakes, got zing from the squiggle of wasabi mayonnaise that was laid out for the diner to swipe through to their own desired heat level.

Pepperoni pesto mac and cheese ($12) was another crossover combination that worked. Cavatappi pasta punctuated with pan-crisped pepperoni nubs was perky enough, but the green freshness of garlicky herb paste in a light cream sauce and crowned with crispy panko crumbs lifted it to gratifying heights. 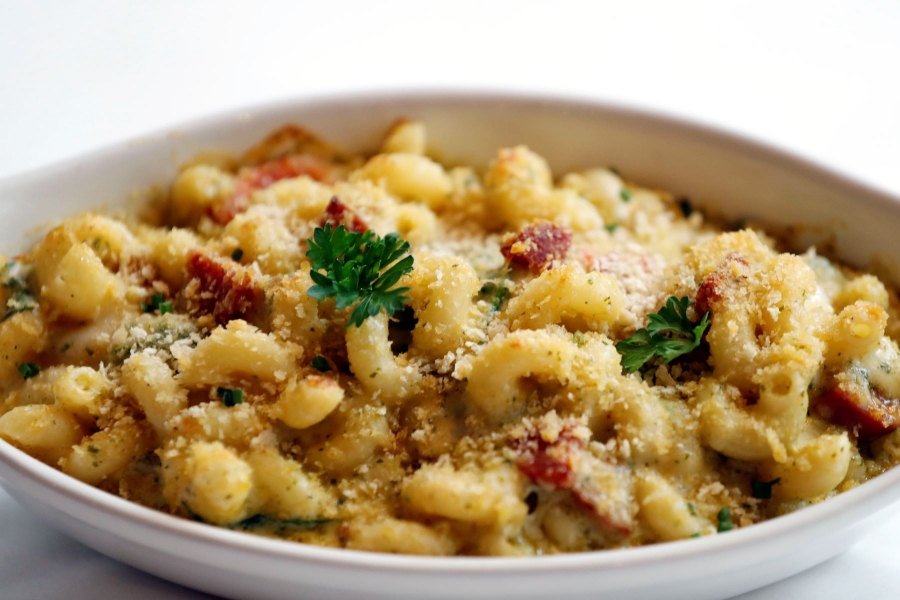 Salmon ($27), seared expertly to retain interior lushness, was enhanced with a dollop of verdant chermoula, an intense pesto-like seasoning with a North African heritage and a backbone of garlic and lemon. The vegetable-studded risotto beneath it was slightly overcooked, leaving the rice mushy. 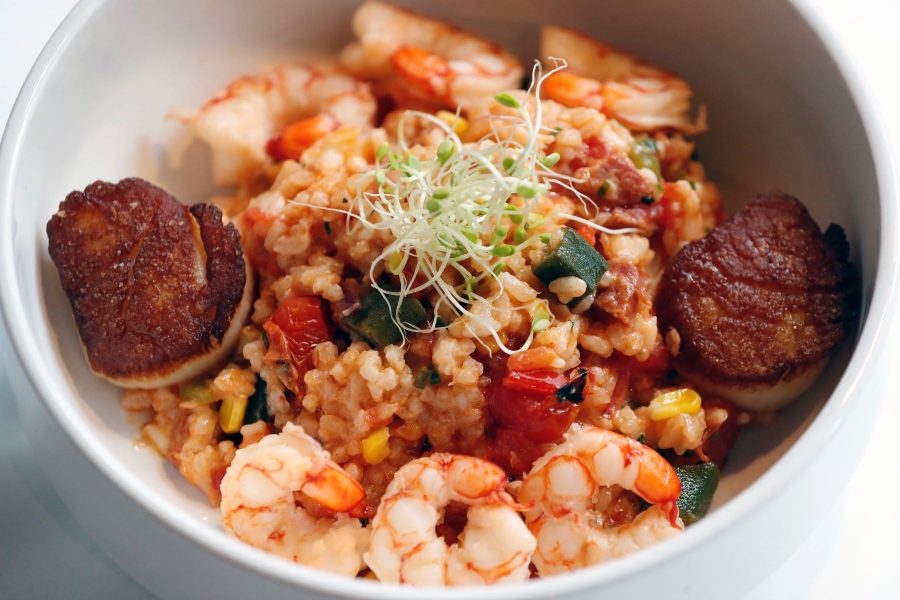 Spare ribs ($25) in a strawberry-jalapeno barbecue sauce were a sound example of the roasted rib genre, tender but not falling apart under their own weight. (Today they’re served in a charred peach sauce.)

A zucchini bake ($20) as the vegetarian entrée, combined with quinoa, had my skepticism tingling, driven by the memory of dreary entrees-of-obligation assembled by uninterested cooks elsewhere.

Forte, though, delivered a casserole with character. Roasted red pepper puree and mushroom duxelles gave it depth, under a mozzarella snowcap. 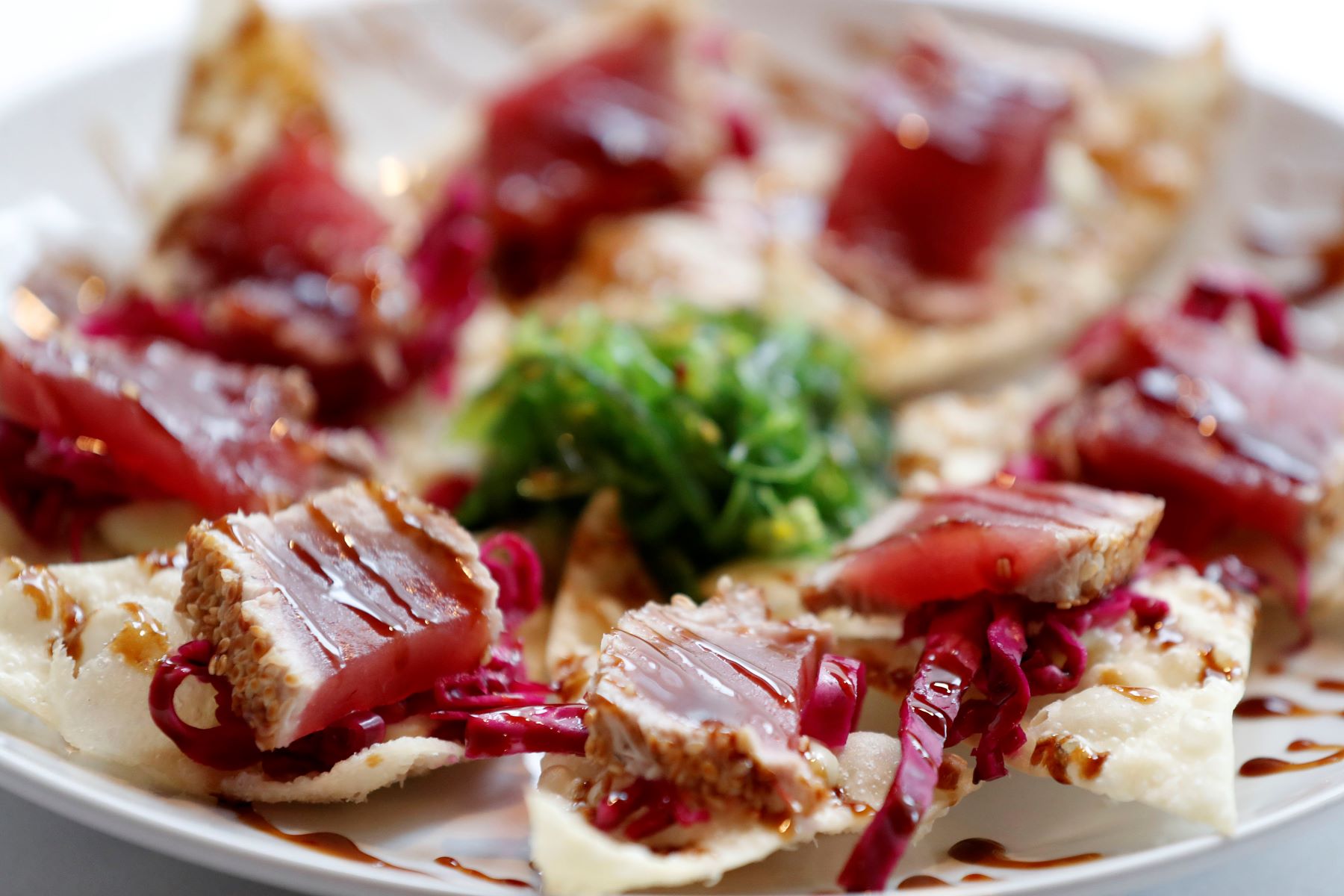 Jamestown is about as far as New Yorkers can get from Manhattan, but Forte brings a United Nations of flavors to the Pearl City, at prices that are right at home. Making people give thanks this restaurant serves such a menu here and now? That’s precisely its forte.

Hours: 5 to 9 p.m. Tuesday through Saturday. Closed Sunday and Monday 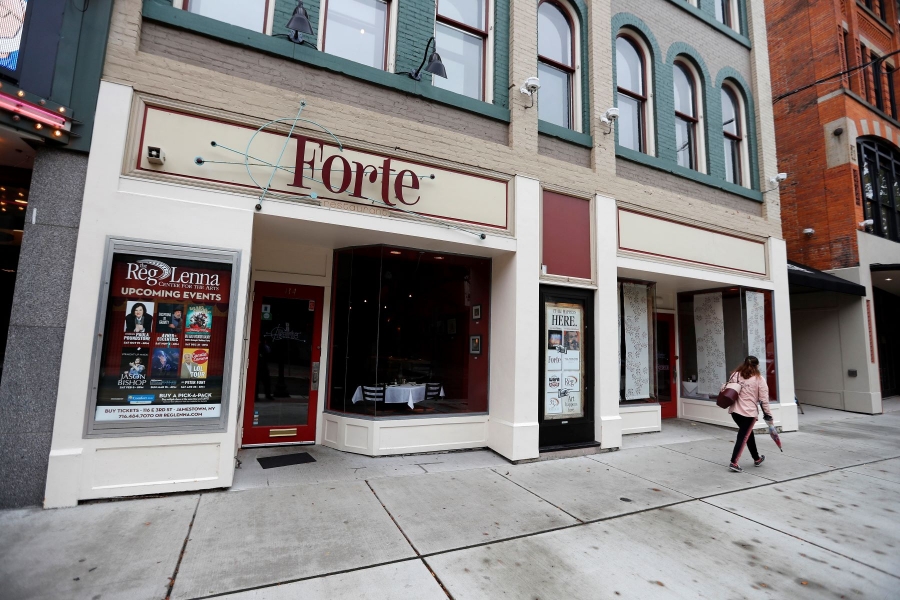 The facade at Forte in Jamestown. (Mark Mulville/Buffalo News)