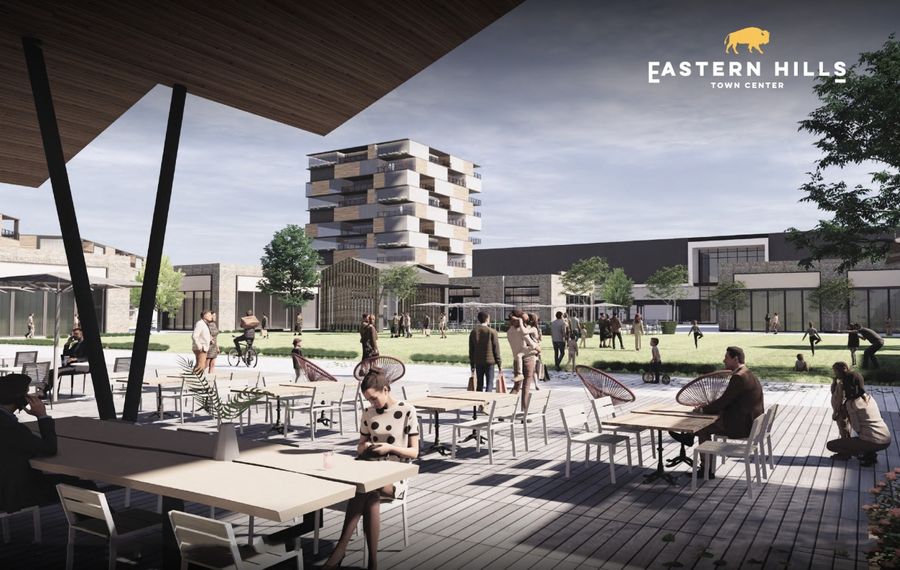 You won't recognize the Eastern Hills Mall if its developers can pull off the town center transformation they have planned for the 100-acre Clarence site.

"To the scale we're planning on doing this, it doesn't exist in this region," said Carl Montante Jr., vice president of marketing at Uniland.

That vision was spelled out by owners Uniland Development and Mountain Development, along with architect Gensler, in a master plan being released Tuesday for the $250 million project temporarily dubbed Eastern Hills Town Center.

The concept envisions a walkable, self-contained community – much like an urban downtown – where residents can live, go to work, eat, shop, go to medical appointments, hit the gym and take in a concert; all without ever having to get in a car and leave. It will feature boutique-style retail interspersed with restaurants and public recreational space ringed by apartments, offices, hotels, townhomes and walking trails.

Developers hope to break ground on the first phase of demolition and construction in early 2021. If all goes according to plan, the first apartment residents will make the town center their home in 2022.

But there are significant hurdles to overcome.

How much of the plan comes to pass depends on whether the developers can find tenants to move into the vast amount of office space, residents to fill the housing units and compelling enough retailers to draw them all to Transit Road.

And they have to secure financing for a sprawling project in a market with a stagnant population, which means new projects often must lure tenants and residents away from existing homes and businesses in the region.

Those involved are confident they can do it. They say people's needs are changing, and this project is the first to evolve with those needs and preferences. The companies' research shows that there is demand for an urban village of this caliber in the market.

"There are a lot of amazing revitalized areas in Buffalo today, but no one area that brings all of these uses together," said Marc E. Bruffett, principal at Gensler. "I think it will come together in a special way that celebrates the region's people, culture and history."

Though project developers stress that the town center is not a mall, the first phase of demolition and construction will focus heavily on retail space in the center of the project.

Boutique retail will surround a 3-acre green space called the Town Square will sit alongside a covered pavilion with outdoor seating. Further down, a piazza-type public space called the Plaza is surrounded by more retail space. So-called "barn" space, which can hold 40 to 170 people, is interspersed throughout the heart of the center, which can be rented for private functions, or host public events.

The Raymour & Flanigan store, which is signed to a long-term lease, will remain where it is in a free-standing building, with office space on either side. J.C. Penney, also on a long-term lease, will remain where it is. Eastern Hills has designed the master plan around those stores and Niagara Emporium – a large antique store that operates under a licensing agreement – as well as the former Sears. The former Sears houses the Buffalo Store, and soon will be home to Chrusciki Bakery, Simply Pierogi and Chrusciki Bakery's banquet space.

Local and regional retail will be heavily favored through the first phase of development, and the mall's current tenants will remain open during construction. Uniland will meet with all 80 of the mall's tenants to discuss if the town center will be "the right fit" for them, Montante Jr. said. The mall is also looking for first-to-market restaurants, especially those with an experiential component. A food hall is planned for a later phase, which could host local and national names.

Though the developers hope to bring sought-after national retailers, two of the most buzzed about ones are already off the table: both Costco and Ikea are too large and won't fit under the town center's zoning guidelines.

Phase-one construction will fan out from the center's residential and retail space toward the edges of the property. Most residential space is envisioned for the eastern end of the project. A 10-story apartment complex envisioned alongside the Town Square is intended to lend an urban feel while building density and bringing people closer to places they can interact and congregate.

On site will be a mix of studio to two-bedroom market-rate apartments, townhomes and senior housing. Developers have been in talks with senior housing developers who have expressed interest in building a community for residents ages 55 and older, Montante Jr. said.

Must of the first-floor apartment space in the heart of the center will have retail space on its first floor, as will office and civic space. Residential on the eastern edge of property is designed to integrate into the surrounding neighborhoods.

Traditional office space and coworking space are envisioned for seven buildings on the site. Uniland said it has spoken with health care companies and medical offices interested in occupying space at the center, whether they're expanding offices or relocating.

Like the residential space, office space builds in a captive audience of consumers who will eat at the center's restaurants, shop at its stores, use its services and attend its events. The stronger mix of residential and office rents would also be more profitable than retail mall rents have been at Eastern Hills Mall over the past decade or more. The center's mix could also include services such as a dry cleaner, fitness center, day care or movie theater.

Developers hope to land two hotels: one higher-end signature hotel, plus another more affordable option. They would serve the offices and homes in the town center and nearby, and bring new meeting and banquet space to the market.

Two large office buildings, the two hotels, a ring of apartments and a civic hub are lined up along Transit Road. They are meant to act as a buffer, protecting the heart of the center from some of the noise and visual clutter of the heavily trafficked thoroughfare.

Parking and other components

Parking is integrated throughout the town center on surface lots, on streets alongside buildings and in three parking ramps. Civic uses on the site plan could include an NFTA park-and-ride station and Uber pickup and drop-off locations. Eventually, driverless shuttles could carry people throughout the complex.

More than a mile of landscaped walking and biking trails loop around the outside of the town center.

Construction will begin with the retail and public space planned for the center of the project, and will fan out toward the edges of the site during multiple phases that could span the next two decades.

"We have to think 20 to 50 years in advance, because we want it to be relevant to future generations," Montante Jr. said.

Montante Jr. noted that the master plan is conceptual, that it will change based on input from town officials, the community and market demand.

Eastern Hills Mall will unveil the master plan to the public at 6 p.m. Tuesday in the food court at the mall, near the BFLO Store. The developer is also asking for feedback on the plan at Uniland.com, and via email at cmontantejr@uniland.com.