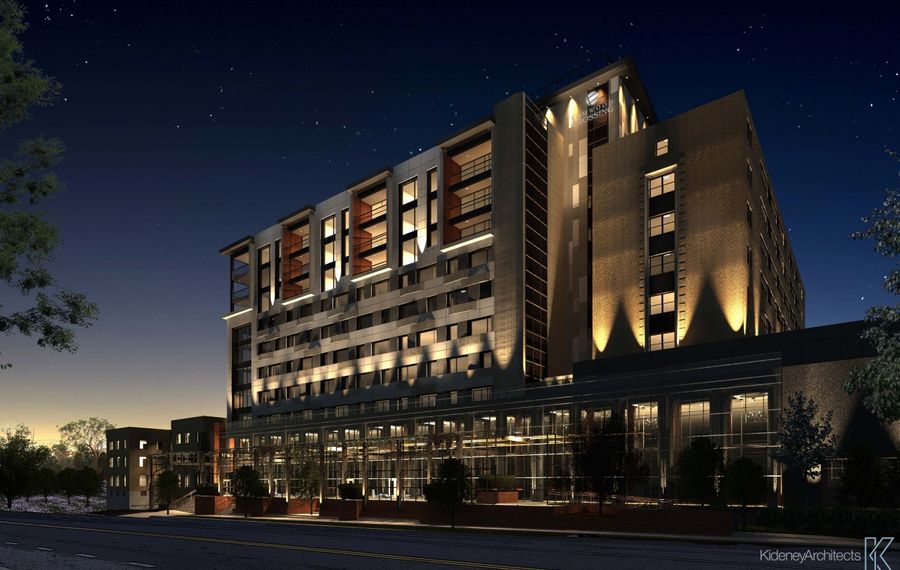 The Buffalo Common Council approved a planned unit development designation for the Elmwood Crossing redevelopment project Tuesday – despite vocal opposition from a group of neighbors who repeatedly interrupted proceedings to denounce the Council's actions.

Compared to months of debate and years of prior planning, the vote was relatively quick and anticlimactic.

Council Majority Leader David A. Rivera acknowledged there are still concerns from some residents about specific aspects of the overall campus plan, but noted those could be addressed in the future through the city Planning Board's review of individual projects.

For now, he said, it's time to move forward.

"Neighborhood residents have offered input over five years. ... There have been valid concerns on all sides," Rivera said. "I’ve tried to mitigate as much as I could before moving on. At this point, the project needs momentum for many reasons.”

Residents were quick to threaten further action – including possible litigation – to address their concerns, and to force adherence to the city's Green Code.

They said the developers should not be allowed to bypass the height, density and other zoning rules the neighborhood fought for, in the Green Code.

They have complained that they had not had enough advance notice about the planned unit development, which was unveiled to the public along with extensive project details more than a year ago, after the developers worked with a neighborhood advisory committee.

"If they didn't know, I don't know where they were at," he said. "We had a Council meeting, we had public meetings, we had community meetings, we had advisory meetings. And some of these people came out at the very end to protest."

Rivera also said developers met the community goals that were "set early on" for affordable housing, green space, adaptive reuse and brownfield cleanup of the site. Now, he said, they need an opportunity to "market the product that they are going to provide."

"The residents who live nearby this development live in the shadows of old buildings that have been dormant and vacant for so long, and they have to walk by this every single day. The business community has suffered as a result of losing business from the density that the hospital provided for many, many years," Rivera said. "People look at things through different lenses, and we had to compete with all of that."

The approval of the planned unit development for the former Women & Children's Hospital of Buffalo campus means that Sinatra & Co. Real Estate and Ellicott Development Co. will have a unified set of zoning rules governing the entire eight-acre site. That's designed to make it easier for the development team to complete the series of projects they have laid out to reuse the hospital buildings while also bringing 220 new apartments, 27 condominiums, 22 townhouses, a 75-room hotel, an urban grocery, boutique shops, offices and an EduKids day care to the neighborhood.

"We’re really ready for this to move forward, as the community members are, so we’re relieved," said Amy Nagy, director of development for Sinatra. "There’s still ample opportunity for people to have discussion on this. This is going to continue to evolve."

On Monday, the Planning Board will hear the developers' proposal for the day care, which involves reuse of a former pediatric building on Hodge Street, with an addition. The $1.7 million project, which the developers hope to start this winter, would serve about 125 kids.

Next up will be the for-sale townhomes, which Essex Homes of Western New York will construct at 188 West Utica St. Officials hope to submit an application to the Planning Board in the first quarter, start work on the $10 million project by early spring and finish the first phase by year-end 2020.