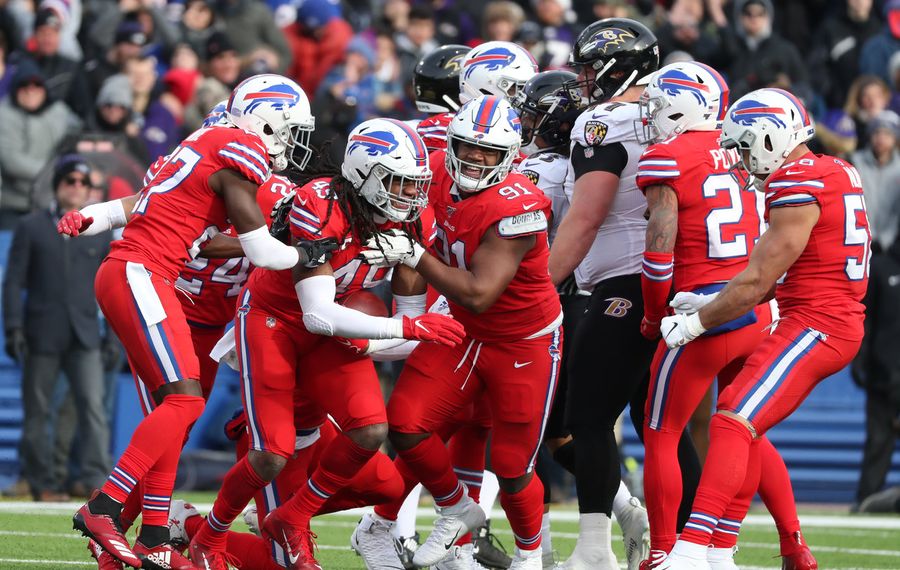 The Buffalo Bills’ defense proved it is not soft against power run schemes Sunday.

The Baltimore Ravens managed just half their season rushing average by gaining 104 yards on the ground against the Bills in their 24-17 victory. The Ravens entered the game averaging 5.1 yards a carry on first down. The Bills held them to 3.89. Lamar Jackson had averaged 88 rushing yards a game the previous 11 games. The Bills held him to 40. The Ravens were averaging six runs of 10-plus yards a game. The Bills allowed two.

And the Bills’ base 4-3 defensive front held up when the Ravens used two backs or multiple tight ends. Baltimore ran 19 times for just 3.8 yards a carry against the Bills’ 4-3, according to Buffalo News charts. The Ravens had been averaging 4.9 a carry with heavy personnel in the game.

The Bills’ defensive line leads this week’s position-by-position grading of the Bills, based on video review and on a scale of 0 to 5:

Defensive line (4.5): Ends Jerry Hughes, Shaq Lawson and Trent Murphy were assignment sound in defending Jackson’s read-option runs. Most of the time, the Bills had their ends sit tight and play the quarterback. Star Lotulelei, Ed Oliver and Jordan Phillips all played stout at the point of attack and did a good job of keeping linemen off the linebackers. Oliver continues to impress with his power despite his lack of bulk. His best play came in the fourth quarter when he stood up and shed Pro Bowl guard Marshall Yanda at the point of attack to force a 1-yard gain. Lawson had two QB hits, a hurry and forced a 4-yard loss.

Linebacker (4.5): Tremaine Edmunds had eight tackles, two for loss, and played tough in the running holes. He faked a blitz and got back in his zone in time for an athletic interception. Matt Milano was juked by Jackson early but played fast. Lorenzo Alexander played 37 of his 41 snaps as a linebacker in the 4-3 front due to the fact the Ravens played big so often. He showed he still is an asset. He stuffed a receiver screen for an 8-yard loss, hustled to catch Jackson from behind and played tough on the edge. Then he deflected Jackson’s last third-down pass to force a punt and give the Bills one more chance.

Defensive backs (3.5): The Bills' secondary had to punch way above its weight class and had a superb tackling day. With the ends guarding Jackson, Jordan Poyer had to come up often to support the run. He had a team-high 10 tackles and six of them were run-force plays in the hole that took courage. Micah Hyde had seven tackles. Levi Wallace and Kevin Johnson both tackled well on the edge. Leslie Frazier blitzed on just four of 26 drop-backs by Jackson, but one of them was the 61-yard TD pass to Hayden Hurst, which Hyde called a miscommunication. Hurst lined up in a stack with Nick Boyle, and both Hyde and Poyer initially covered Boyle. It’s apparent Poyer needed to stick with Hurst. There was no help deep because the Bills rushed six men.

Quarterback (2.0): It was a learning experience vs. a great, attacking defense for Josh Allen. After missing underneath throws early, Allen got into a better rhythm in the second half. Allen’s throw to Dawson Knox for 37 yards was perfect. Allen had a great step-up in the pocket on the play that drew a pass interference on Cole Beasley. Allen also had an amazing sack avoidance on the final third-down incompletion. His final throw for John Brown was in a perfect spot.

Offensive line (2.5): By our count, Knox was responsible for two sacks, Allen one, Mitch Morse one, and two were a case of the Ravens’ defense simply outscheming the Bills. Of course, only the Bills’ coaches and players know the full responsibilities on every play. It was not a terrible day for the O-line, considering the quality of the Ravens’ defensive front. Brandon Williams and Michael Pierce are beasts in the middle. They clogged up some plays even when the Bills were running against a light (six-man) box. Quinton Spain and Morse had trouble with them. And strong safety Chuck Clark was a monster supporting the run and blitzing. Still, the Bills picked up a lot of stunts well. When they were one-on-one edge blocking, Dion Dawkins and Cody Ford did OK. They each allowed four hurries, by News charts. Jon Feliciano had the best day of the linemen. He had key blocks at the point of attack on a 14-yard run and Devin Singletary’s 38-yard run.

Receivers (1.5): The final incompletion for Brown was so close. Even though Marcus Peters grazed the ball, it still went through Brown’s hands. It was not a drop, but it might have been caught. Meanwhile, clear-cut drops by Knox, Singletary and Beasley – all in the third quarter – squandered three big plays. Beasley had four catches, a TD and a two-point conversion, but could have had more if Allen looked to him more. Beasley also kept the last drive alive by getting behind Marlon Humphrey to draw a penalty. Knox had an inconsistent day. He was responsible for two sacks. Due to a heavy blitz, he got caught in a one-on-one block with Matthew Judon and was beaten in the first quarter. Then he missed Earl Thomas blitzing off the edge to cause another. Lee Smith was beaten by Jaylon Ferguson at the point of attack on a goal-line tackle for loss.

Running backs (3.0): Singletary had difficult duty picking up blitzes in pass protection and did the job most of the time. It’s just the Ravens kept sending more people than the Bills could block. Singletary made Clark miss at the line of scrimmage early in the game with a nifty juke and had a superb cut on his 38-yard run.

Special teams (3.0): Stephen Hauschka rebounded with three field goals, and the Bills had no coverage or protection breakdowns against the best special-teams units in the NFL. It was a tough day to punt. Pro Bowler Sam Koch was better than Corey Bojorquez, who had one ill-timed mis-hit to open the fourth quarter, which led to a Ravens score. Otherwise Bojorquez did well, with three hang times of better than 4.55 and a punt downed at the 8.