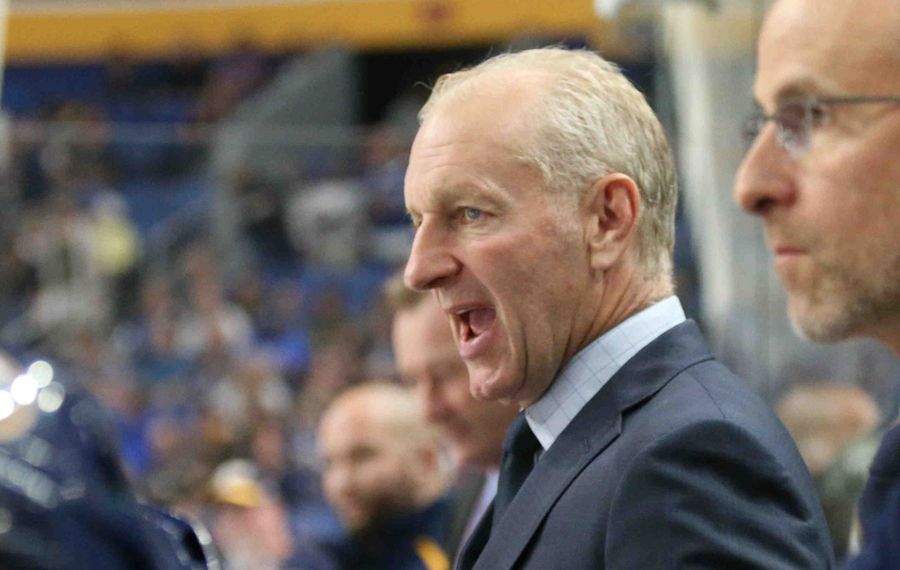 EDMONTON — The Buffalo Sabres needed a win to get a split of their hectic Western Canada trip. But even more than for themselves, they wanted this victory for their coach.

Ralph Krueger was fired by the Edmonton Oilers 6 1/2 years ago, and his one season at the helm looked like the end of his NHL coaching career. The Sabres gave him another chance in May as Krueger was turning 60, and it's been an up-and-down ride so far.

Sunday night in Rogers Place was a high moment. The Sabres beat the Oilers, 3-2, on defenseman Colin Miller's goal at 1:13 of overtime, his first in 24 games with Buffalo, and gave their coach a measure of revenge against his old team.

"It's real nice. They know the story. They know the history," a grinning Krueger said afterwards of his players. "We've got an honest culture in there, and we're just out for each other, so it was a beautiful, beautiful victory here tonight. Just real pleased with the guys making that special gesture and it's something we're definitely going to build on."

Players openly talked about winning for Krueger during their morning workouts and again between periods, as a 2-0 lead after 20 minutes turned into a 2-2 tie after 40.

"Things didn't end well here for him, and he wouldn't say it, but I know this game meant a lot to him," said Kyle Okposo.

"It's always special coming back to a place that you've been," added Marcus Johansson. "This is the first time since he came back. Probably a little bit emotional. Sure it means a lot to him. It was fun to get those two points for him. I feel like he deserved that. I think he's been really good so far, and it was fun to get that one for him."

The Sabres had dropped five straight games in overtime but were patient in this one. Edmonton stars Connor McDavid and Leon Draisaitl, neither of whom collected a point, twice fumbled the puck away in the extra session and were both burned on the game-winner.

Jack Eichel worked around Draisaitl up high and got the puck to Johansson in the right circle. Johansson passed through defenseman Oscar Klefbom and Miller was ahead of McDavid in beating goalie Mike Smith.

"Eichs had it, went low to 'Jo Jo' there. The 2-on-1 kind of developed," Miller said. "He made a great play that snuck through. I wasn't even sure it made it through at the start there and I got lucky and it squeaked in."

"When I dropped it to Jack and saw he was going to give it back I already realized it was going to be a 2-on-1 situation," Johansson said. "Most of the times I want to try to make that pass because it makes it harder for the goalies."

Miller, a healthy scratch for seven of the last 14 games, sat out Saturday in Vancouver but took Jake McCabe's place on Sunday.

"It's been a while to score and it's been an interesting season so it felt good," said Miller, whose last regular-season goal in Vegas was on Feb. 28. "It feels good but I mean it's one goal. They come in bunches hopefully. They haven't come for a while there. Hopefully more to come."

"I thought 'Millsy' played a really strong game tonight and that's why we picked him for that second unit in the overtime," Krueger said. "He earned it with his play overall, He was really aggressive in the neutral zone, very confident with the puck tonight."

Overtime has been frustrating for the Sabres of late with the string of losses that dated to Oct. 28. Johansson said the team has played well in several of the games and Eichel even scored Saturday in Vancouver, only to have the goal wiped out by a Henri Jokiharju interference penalty that led to J.T. Miller's game-winner.

"It's basically who makes a play," Okposo said. "You get some overtimes that are back and forth, 2 on 1s, breakaways, whatever. It's just a crapshoot. Other ones you get kind of tight, then a guy misses an assignment and it's in the back of your net. Tonight we made a play. Jack made a great play there. Jo gets it over to Millsy and that's the way she goes sometimes."

Krueger's team battled to go 1-1-1 on the road trip, is 4-2-3 in its last nine and is one point behind the Florida Panthers for second place in the Atlantic Division.

"Overall, there is a consistency now and a belief in what our game is," Krueger said. "It's one thing to know we have a plan. the other thing is that it starts becoming automatic and the habits come through. That's what we're seeing more and more here, that we're able to recover in a game."

The players have been in Krueger's corner from day one of training camp, something you certainly couldn't say when Dan Bylsma or Phil Housley was their coach. They'll remember this win just like their coach will.

"He's honest, he's fair, he's demanding, fun," Okposo said. "He's an extremely good motivator. He's a guy that everybody wants to play for. I know talking to the guys that were in Edmonton that had him, I didn't hear one bad thing about him. He's pushing us to be better, and we're appreciative that we have him."