If you live in Western New York, you probably see Canada on the regular. Maybe even every day. The border is a backdrop to our lives, but there’s a lot we don’t know about it. That’s why we launched our series, “The Other Border,” which began in November and wraps up later this month.

Our work on the series took Buffalo News Chief Photographer Derek Gee and me across the border in New York, from the eastern-most portion of the state back to our own region. The stories delve into a range of border topics, from efforts by law enforcement to unearth drugs and other contraband to the journeys of refugees from around the world to what actually happens at a border inspection.

We've received plenty of questions from readers over the last few weeks. Here are answers to some of the most frequently asked:

How much search authority do border officials have?

At ports of entry – which include all four passenger bridges in Western New York – quite a lot. Federal law allows U.S. Customs and Border Protection officers to search vehicles and personal items such as luggage, laptop bags and purses as a matter of routine. This can happen for inbound and outbound traffic and does not require a warrant or even a level of suspicion.

Some level of suspicion, however, is required for personal searches that involve pat-downs, partial removal of clothing, or internal X-rays. These types of searches may be used, for example, to find out whether somebody is trying to carry drugs or other contraband across the border.

You're likely part of the 99%. Border agents get one chance to be sure.

Can they really search my phone at the border without a warrant?

Phones, cameras, computers, tablets and other electronic devices can be searched. Some of those searches have uncovered evidence pertaining to terrorist activity, child pornography, human trafficking, export control and intellectual property rights violations, visa fraud, and the smuggling of drugs, large amounts of cash and people.

But that said, devices are rarely searched – and CBP officials are quick to point that out. When I discussed this question with Chief Officer Aaron Bowker, who is public affairs liaison for the Buffalo Field Office, he provided an official CBP statement to put it in context: “In fiscal year 2019, CBP processed more than 414 million travelers at U.S. ports of entry. During that same period of time, CBP conducted 40,913 border searches of electronic devices, representing less than .01 percent of arriving international travelers.”

Some instances of electronic searches have grabbed a lot of media attention, including in The Buffalo News. They may be a small percentage, but they are sensitive, and CBP officials are precise when speaking of them. Bowker also shared an official statement that notes CBP “has established strict guidelines to ensure that these searches are exercised judiciously, responsibly and consistent with the public trust.” 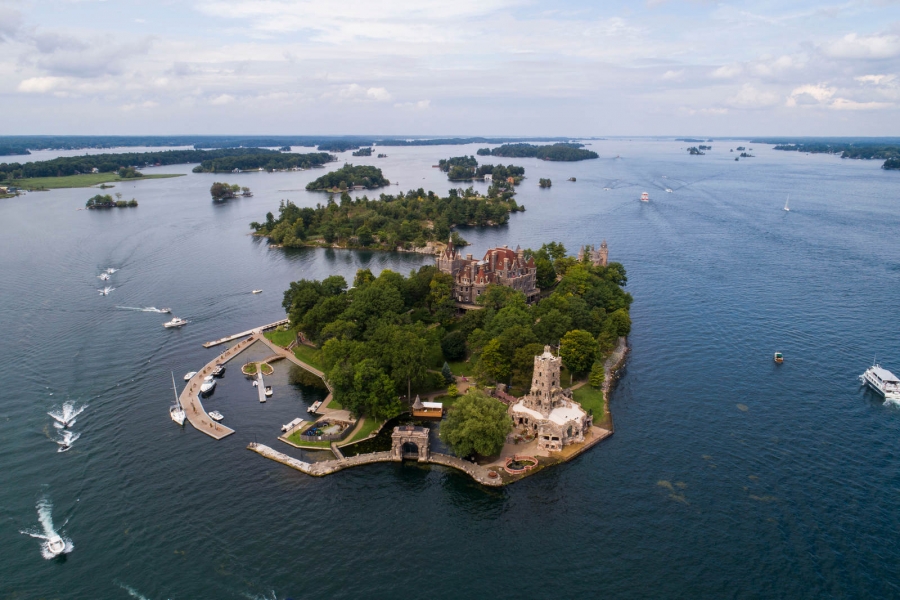 From your travels, where is the best place to see the border from a different perspective? 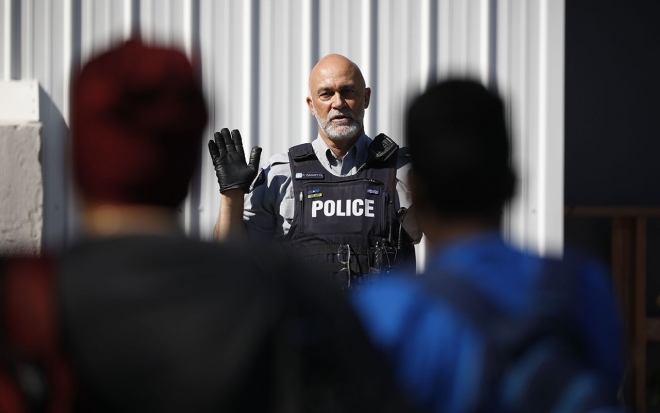 A Royal Canadian Mounted Police officer advises a Palestinian family from Gaza that they will be arrested if they cross the border into Canada as they attempt to claim asylum at the end of Roxham Road. (Derek Gee/Buffalo News)

U.S. border officials seem OK with all those people crossing illegally into Canada at Roxham Road. Why?

A consistent theme I’ve noticed since beginning work on this series is this: Border officials from both the United States and Canada focus most intensely on who is entering their country, or already in it. If they notice people leaving, they may give their counterparts across the border a heads up. But they won’t necessarily stop those people – nor, in many cases, can they stop them.

Wade Laughman, patrol agent in charge at U.S. Border Patrol’s Massena Station, gave me an example: “Somebody might be in here on a six-month visa to the United States, and they legally flew in on a visa that’s going to expire in a week,” he said. “(They may think), ‘You know what? I’m going to go to Canada, because it’s either that or I’m going to get deported. I don’t want to be here illegally.’ ”

Border Patrol agents may come across such a group in a place like Massena – or Plattsburgh, or even perhaps Buffalo. If those visas are still valid, then the people are in the United States legally. That can prompt a call from Border Patrol officials to their Canadian counterparts that would go something like this, in Laughman’s words: “Just so you know, these people are still valid in the United States. They’ve got visas; we can’t do anything. But tomorrow they expire, so they’re going to be coming north.”

That northward trek could happen over water, which would be the likely case here in Western New York. Or it could be through the woods or farmland, in the New York’s North Country.

Or it could be in the wide open, at Roxham Road in Champlain, the rural spot about a half-hour from Plattsburgh. That's where tens of thousands of people have crossed illegally from the United States into Quebec over the last three years to claim refugee status in Canada. Roxham is so open, and the crossings so frequent, that the Royal Canadian Mounted Police have set up a building on the Quebec side of the border where they process the arrests and then the people ask for asylum.

Anywhere on the border, this dynamic changes when a person or a group is considered to be a threat, or smuggling is involved. Canadian and U.S. officials regularly share intelligence about dangerous individuals or groups, and they work together to clamp down on the smuggling of people and goods. Homeland Security Investigations, which is an arm of the U.S. Department of Homeland Security, leads Border Enforcement Security Task Forces that include law enforcement personnel from both countries. We’ll be sharing more about how those BEST teams work in the final two stories in “The Other Border” series.

At Roxham Road, refugees find a loophole and safe passage to Canada

How much of a security concern is the Niagara Power Project?

During my research for this series, I spent time trying to figure out which areas of the border are most sensitive from a national security perspective. The obvious possibility in my mind was the Niagara Power Project in Lewiston. It’s located on the water, a short drive from the Lewiston-Queenston Bridge, and clearly under heavy security surveillance.

I posed the question to former Secretary of Homeland Security Janet Napolitano, who served under President Barack Obama, and who earlier this year published a book, “How Safe Are We?”

“Big pieces of critical infrastructure, like the Niagara Power Plant, to be successfully attacked would require more than one person,” she said. “It would require a group of people.” Napolitano was drawing a contrast to single shooters attacking soft targets like schools, churches and concert venues. “It’s much different than something that’s susceptible to a lone-wolf shooter,” she said, “like that happened in Parkland or like happened in Las Vegas or so forth. It’s just a different dimension.”

Whereas lone shooters may slip undetected into a less-guarded site, a group of people equipped with guns and explosives and aiming to attack a hard target are more prone to be caught. There are more people, and more elements to coordinate, and therefore more ways to stop it.

“That’s why I say that our relations with Canada and Canadian law enforcement are so important,” Napolitano said, “because when you have a conspiracy, then you have the opportunity to detect that conspiracy ahead of time, to intervene, and to prevent.”

“All of these power plants are networked,” she said. “Our banking system is networked. Our water systems are networked. They’re all susceptible to hacking, or to interference in operations through their cyber networks.”

That’s a risk that comes with no borders.

Editor's note: The Buffalo News hosted a reader Q&A session with U.S Customs and Border Protection at noon EST on Tuesday, Dec. 10, 2019. You can watch it live on our Facebook page, or below.

Story topics: The Other Border