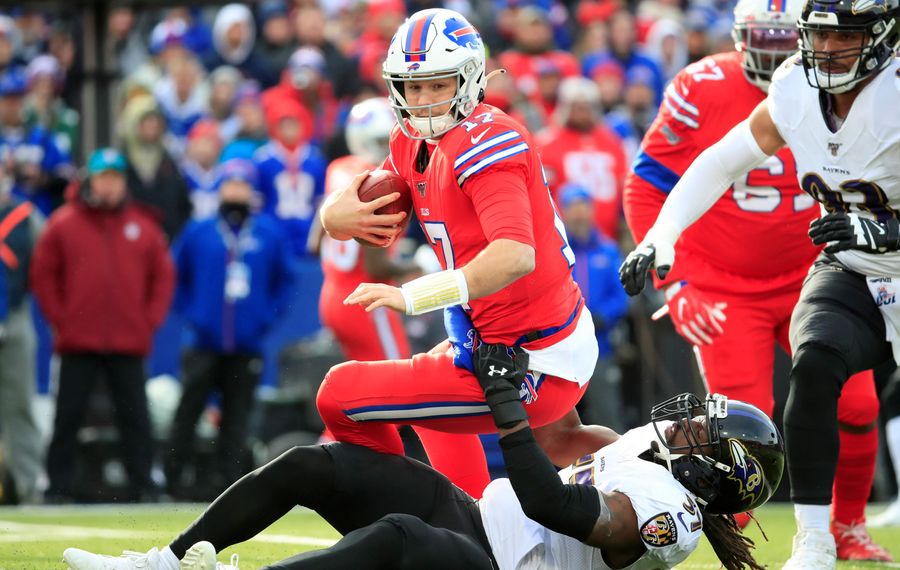 Josh Allen often let the play clock run down before snapping the ball in the Bills’ 24-17 loss to the Baltimore Ravens on Sunday at New Era Field, not in an effort to milk the clock and keep the visitors’ powerful offense on the sideline, but to try to figure out what the heck was going on.

“They blitzed from everywhere,” guard Jon Feliciano said, “so we were able to hit them with dummy cadences to see where they were coming from. That’s probably why we were letting that clock milk down, just to have Josh hit them with a few fake ‘huts’ and then you start seeing the rotation and where they’re really, truly coming from.”

Allen completed 17 of 39 pass attempts for 146 yards, a three-yard touchdown pass and two-point conversion to Cole Beasley, and a 62.6 passer rating. He also rushed twice for nine yards.

Allen was just 8 of 17 for 39 yards at halftime, when the Ravens owned a 10-6 lead. Baltimore scored on its first possession of the second half and maintained control the rest of the way.

The Ravens blitzed a whopping 30 times, according to ESPN Stats & Information. Allen completed 7 of 24 passes on those plays.

“I think that sometimes that’s a misconception that we blitz all the time,” Ravens cornerback Marlon Humphrey said. “I think we just have some good guys up front. But today we definitely, definitely blitzed a lot. (Defensive coordinator Don 'Wink' Martindale) told us that was going to be one of the things – told the DBs to be ready and make sure the guys up front are able to wrap up Josh Allen. He’s a great thrower, but he’s also a great runner and it’s really hard to get him down.”

“He looked like he was under duress throwing the ball, didn’t know where he was going to get hit and kind of looked jittery in the pocket at times,” Ravens cornerback Jimmy Smith said. “He stood in there and made some strong throws, as well, though.”

Allen said he didn’t have too much difficulty recognizing the blitz, but struggled to find the open receiver and make the Ravens pay.

Running back Devin Singletary led the Bills with six catches for 29 yards.

Beasley had four catches to match him for the team lead with 29 receiving yards.

John Brown caught three of eight targets for 26 yards. He was wide open deep on the Bills’ first possession, but he and Allen failed to connect.

“One thing I realized is that they were bringing pressure to my side, so Josh was rolling away,” Brown said.

Knox had a critical drop earlier in the contest and whiffed on an attempted block of Baltimore linebacker Matthew Judon, who finished with 1.5 sacks and hammered Allen in the second quarter, causing a fumble deep in Buffalo territory. The Ravens cashed in with a touchdown to take a 10-0 lead.

“You can’t let Josh just stand back and throw, of course,” Ravens coach John Harbaugh said. “He’s got such a great arm. And then the other thing goes with that is not letting him out of the pocket because he does such a great job scrambling, leads the league in yards after contact. As a quarterback, he’s a really talented, gifted guy. I really like him. I think he’s a great guy, real hard competitor and that was a big part of the plan was trying to put pressure on him.”