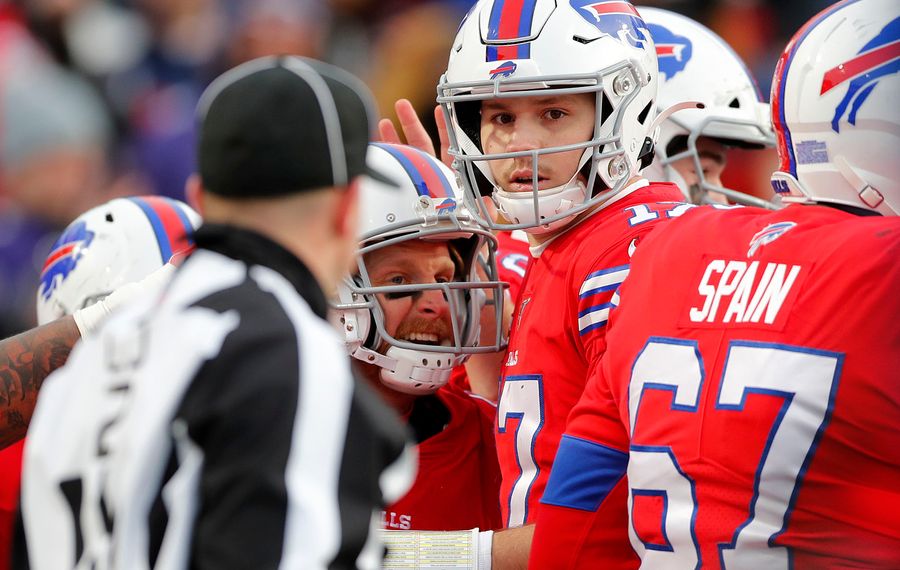 The Buffalo Bills learned nothing about themselves they didn’t already know.

They knew they could hang with the Baltimore Ravens, a Super Bowl favorite who won their ninth consecutive game.

They knew they could contain Lamar Jackson, a front-runner for NFL Most Valuable Player.

They knew they had the advantage of playing this meaningful December game, a 24-17 loss, at home, in front of their rabid fan base, in something resembling a playoff environment Sunday at New Era Field. They knew they were working on extra rest, having 10 days to prepare for this AFC showdown after thumping the Dallas Cowboys on Thanksgiving. They knew they had captured the nation’s attention, with next week’s visit to Pittsburgh flexed to prime time. They knew they were a good team with an elite defense, a promising offense and inconsistent special teams.

They still don’t know whether they can be anything more.

“We have to figure out how to take that next step as a football team,” linebacker Lorenzo Alexander said, “because we’re a good football team, but in order to be great or elite and really to be able to play for a championship, you have to be able to beat the Ravens and New England, those caliber of teams, if you want to find yourself where you want to, as far as hoisting up a Lombardi.”

The Bills (9-4) were in position to take a run at the AFC East division title, to prove their three-game winning streak against Miami, Denver and Dallas, one in which they played their best football of the season, signaled the arrival of a legitimate playoff contender in Western New York.

A first-round bye and home field advantage throughout the playoffs were unlikely but attainable, suddenly and realistically within view.

The Bills still have a shot at the division. They’re one game behind the Patriots with three to play, including that head-to-head matchup in Foxborough.

But New England faces lowly Cincinnati and Miami in two of its final three games.

The Bills seem destined for a wild-card spot and can clinch a playoff berth with their next victory.

Buffalo could have clinched a playoff berth Sunday with a victory against the Ravens and losses by the Houston Texans, Indianapolis Colts and Oakland Raiders.

A postseason appearance, at this point, appears a formality. One more win and they’re in.

And this team could win a playoff game.

They’re capable of winning a first-round game at Houston or Indianapolis.

They could go toe-to-toe with the Chiefs.

This team, with this defense, knows it can hang with anyone.

“We knew we had a legit team,” running back Devin Singletary said. “It wasn’t a surprise what we did today, that it was this close. But we made a lot of mistakes that cost us this game.”

The Bills lost by less than a touchdown to the Patriots, 16-10, on Sept. 29 in Orchard Park, after committing four turnovers and having a blocked punt returned for a touchdown.

They face-planted against the Philadelphia Eagles on Oct. 27 and fell on the road against the Cleveland Browns on Nov. 10, both teams with losing records, always pointing the finger squarely at themselves.

And they battled another AFC top contender down to the final minutes of the fourth quarter here Sunday, rather than folding once the Ravens established a 24-9 lead with about 10 minutes to play.

Buffalo trailed by double digits in the first half of both those games, and while the Bills showed resiliency, they never managed to take the lead, their slow start ultimately proving fatal.

“We were close, but close doesn’t cut it,” receiver Cole Beasley said. “But it’s never the end of the game, it’s the stuff we were doing early that got us in a funk, so we’ve just got to do a better job of starting quicker, starting fast.”

The Bills closed to within 10-6 at halftime against the Ravens, but opened the second half by allowing a 61-yard touchdown pass from Jackson to tight end Hayden Hurst, one of those explosive plays the secondary has been so good at preventing.

But the defense couldn’t have played much better. Baltimore scored its first 10 points on drives that began in Buffalo territory, kicking a field goal after a 35-yard punt and finding the end zone after Josh Allen was sacked and fumbled at his own 26.

The Ravens’ final touchdown drive began, after a 29-yard punt, near midfield.

The Bills, conversely, came away with no points after Tremaine Edmunds intercepted a tipped pass from Jackson in the second quarter at the Baltimore 46. Allen took a sack on third and long, knocking the Bills out of field goal range. He was sacked six times, hit 12 times and fumbled twice, losing one, the Ravens’ defense often overwhelming his protection.

“I don’t think they surprised us at all,” coach Sean McDermott said. “When we turned the tape on, they played some good football – a lot of good football – and at the end of the day we did not execute. Our fundamentals, throwing and catching, were not where they needed to be offensively.”

Buffalo didn’t find the end zone until midway through the fourth quarter, Allen misfiring on several deep throws to wide-open receivers and stymied by a handful of drops before finally connecting with Beasley for a short touchdown and two-point conversion to pull within a single score with seven minutes to play.

On the Bills’ final possession, they turned it over on downs.

“We lost by seven points to a really good team,” Allen said. “We’re not going to let one game define us and one game make us.”

The vast majority of the crowd remained, even after Baltimore opened that 15-point, fourth-quarter lead, its roars shaking the stadium. This was Week 14, and the Bills have a track record.

Their fans knew this team was capable of a comeback. They knew the game wasn’t over yet. They know this group isn’t the same old Bills.

This is a good team.

Here’s hoping for something more.