ALBANY – In 2020, state officials will examine whether to turn to New York residents and businesses for more tax revenues.

With the state facing a gaping hole in its finances, and if history is an already well-known guide to New Yorkers, that’s hardly a bold prediction.

The new state budget is due in March, and Democrats who control the state Capitol are already talking about potentially major tax hikes on wealthy individuals and corporations.

Considering past red-ink periods in the annals of state budget-making, however, low and middle class taxpayers could get caught up in the revenue-raising frenzy.

They might not be directly affected by tax hikes already given names – like the “ultra-millionaires” tax or the “pied-a-terre” tax – but those with less lofty incomes could find themselves hit, directly or indirectly, with any range of levy increases or higher nuisance fees affecting how much it costs for them to drive a car or heat a home or make a widget.

Rank-and-file lawmakers kicked off talk about potential tax hikes two weeks ago after Gov. Andrew M. Cuomo released a report on the health of the state’s finances midway into the 2019 fiscal year. It was gloomy: A $6.1 billion deficit is at hand, driven mostly by rising Medicaid costs.

Assembly Speaker Carl Heastie last week was not shy about his tax-raising preferences. The Bronx Democrat raised alarms about deep Medicaid cuts. “No one’s going to want to see their health care to be cut," he told reporters.

Heastie lined out the basic choices: cut services or hike taxes. “For us in the Assembly, we would always rather raise revenues than cut," he said. “We think New York has some very generous people, and I'm saying that facetiously, that we would always like to call on them to do more in that regard instead of cutting health care or denying health care."

What Heastie was talking about will be a move in 2020 to again raise taxes on New York’s super-wealthy. Earlier this year, Cuomo and lawmakers – for the fourth time since the tax was imposed in 2009 – approved an extension of a personal income tax surcharge on high earners in New York. It’s a tax worth about $4.5 billion annually. 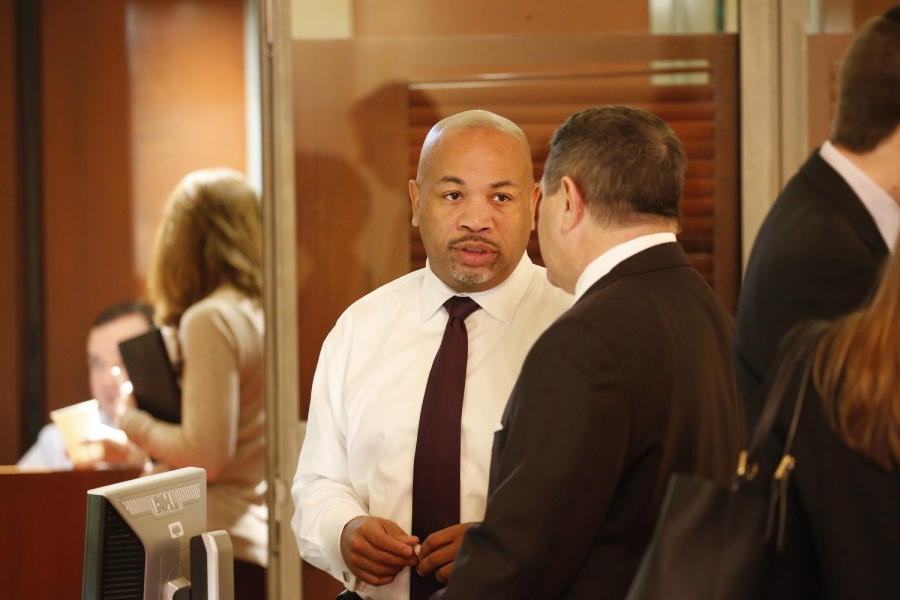 Speaker Carl Heastie chats outside his chambers off the Assembly floor in 2016. (Derek Gee/News file photo)

A plan advanced by Heastie and other Democrats to create a new, three-bracket tax scheme was aimed at ensuring New York’s wealthiest “pay their fair share," as the Democratic conference put it at the time. The top bracket, at 10.32%, would have kicked in on people making over $100 million annually. That idea died in March.

Another dead item, already resurfacing for 2020 talks, is a pied-a-terre tax, which would establish a property tax surcharge on homes valued at more than $5 million. A revised version of that idea, addressing constitutional concerns raised this year, is gaining traction among some lawmakers.

Senate Democrats, as a group, are in a tighter squeeze than Assembly Democrats, who dominate their 150-member chamber. Senate Democrats control 40 of 63-seats, but, importantly, they are in their first year of control after ousting the GOP in the 2018 elections.

All state legislative seats go before voters again in November. Senate Democrats, looking to maintain or increase their majority, will be hard-pressed to enact sweeping tax hikes – which would give the GOP ammunition in battleground Long Island districts. But taxing the super-wealthy, many lawmakers believe, could work even for the most moderate of Senate Democrats.

Senate Majority Leader Andrea Stewart-Cousins, a Westchester County Democrat, declined to comment before she meets with Democratic colleagues, who head to a suburban Albany hotel on Monday and Tuesday for closed-door meetings on their 2020 priorities.

Mike Murphy, a Stewart-Cousins spokesman, said Senate Democrats want tax breaks, though he did not specifically rule out a 2020 budget that might turn to tax or fee hikes on higher income people. “The Senate majority continues to be committed to alleviating the tax burden on middle and working class New Yorkers," he said.

The Cuomo administration, which has the upper hand in budget crafting, isn’t ready to show its hand.

"Opinions are relevant when they are based on facts, and we will present actual numbers and options when we do the budget, as otherwise, this is all just speculation," said Richard Azzopardi, a Cuomo senior advisor. 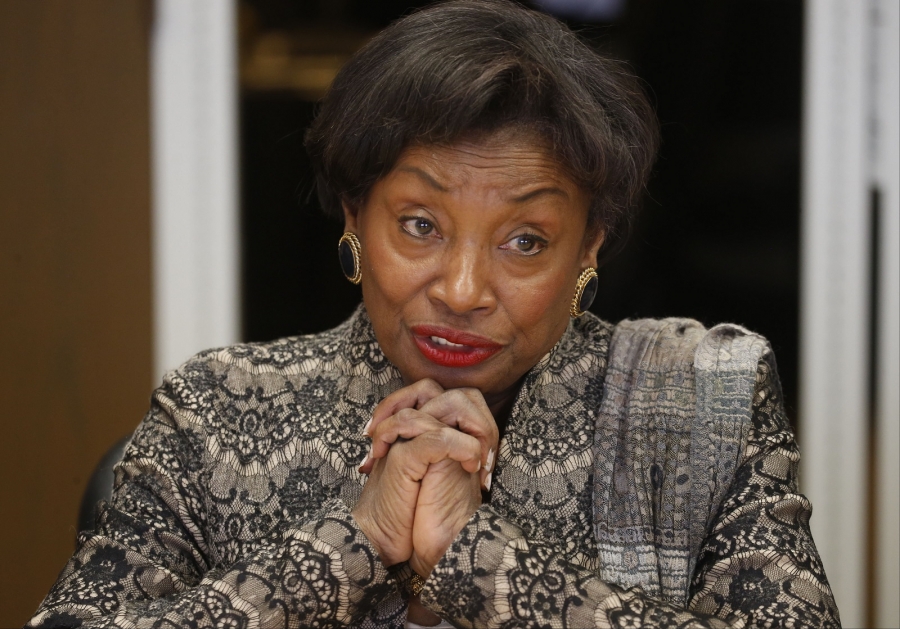 An assortment of groups on the political left – influential with some Democratic lawmakers – are finalizing a 2020 tax-the-wealthy package. Michael Kink, executive director of the Strong Economy for All, which is funded by labor and groups that advocate for homeless and low-income residents, said new revenue-raising efforts are being worked on by advocates “targeting billionaires and the most destructive big corporations." He did not elaborate.

A key state senator said it is important to ensure Medicaid money is spent wisely, but cuts to hospitals and nursing homes affecting patient care should be off the table. Democratic State Sen. Gustavo Rivera said nearly 90% of the patients who go to the main hospital in his central Bronx district are on Medicaid. Rivera can flex his muscle on the issue in 2020; he is chairman of the Senate health committee, which has legislative jurisdiction over the Medicaid program.

“The idea that we’re going to cut on their backs is not something I’m willing to participate in," Rivera said of low-income people who rely on Medicaid.

Instead, he said, revenues should be raised, not from lower and middle class New Yorkers, but from “the folks who are insanely wealthy."

Rivera said ideas that should be explored include new, higher tax brackets for New Yorkers with $5 million or more in annual income, a “straight-up wealth tax” on billionaires, a stock transfer tax and a state carried interest “fairness fee” imposed on hedge fund managers, venture capitalists and private equity investors. “None of them impact working-class people," he said of the ideas.

Nor will such tax hikes, he insisted over the objections of some fiscal watchdogs, push wealthy people to leave New York. “They live in Manhattan for a reason," he said. Rather, it is the middle class being pushed out of New York, and it’s “incredibly important” that any tax and fee hikes in 2020 do not hit them. “If you’re making over $5 million a year … you can afford to pay a little bit more” in taxes, he added.

In the past decade, much of the lobbying and media attention has gone to tax hikes targeting high-income earners, such as the 8.82% top tax bracket on people with annual incomes of $1 million and above. In the years when that upper-income tax surcharge was extended, Albany found ways to hit lesser income New Yorkers.

“They don’t get the attention that often gets put on the so-called millionaire’s tax, but there’s a history of those taxes extending to a lot of different type of taxpayers,’’ said Greg Biryla, New York State director of the National Federation of Independent Business, which represents small business interests. 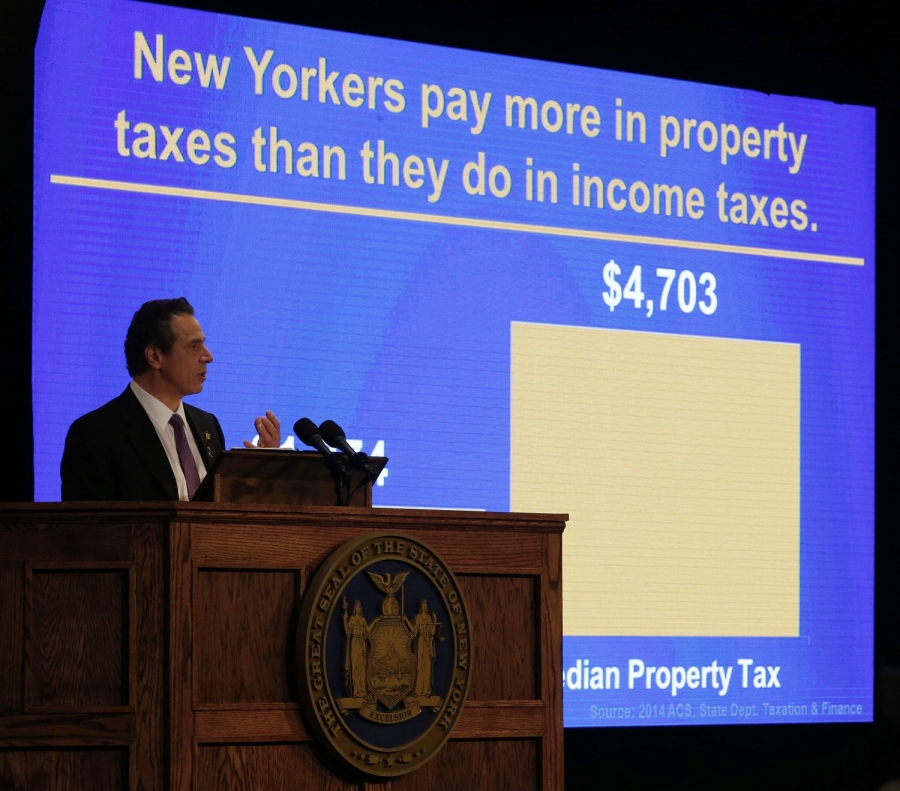 Take just this past spring, for instance. The budget approved April 1 continued the millionaire’s tax surcharge until 2024, and it added taxes on the sales of multimillion dollar homes in New York City. At the same time, the budget continued a lucrative tax break program for the film and TV industry, and it approved another year of a middle-class income tax decrease.

But it also raised taxes on people who rent vehicles upstate, use vaping products, buy over the internet from third-party sellers on sites such as eBay, and make opiods. It also eliminated sales tax exemptions on certain gas and electricity transmissions.

Cuomo in January will unveil his 2020 budget plan, along with his ideas to close the $6.1 billion deficit, which could worsen – or improve – by the April 1 fiscal year start.

Two-thirds of the operating deficit is caused by rising Medicaid costs. An ongoing boost in the state’s minimum wage cost the state $700 million this year to cover the wages of Medicaid-reimbursed health workers and long-term care and other factors are driving unanticipated other health costs.

It is a situation being eyed outside Albany.

Moody's noted that a solution to New York's Medicaid cost hikes is not yet in sight, that the state is set to outpace the nation in Medicaid growth and, overall, that recurring budget gaps only get worse through at least 2023. It did not touch New York's current credit ratings, but it called the budget situation a “credit negative.’’

Economics aside, a soaring deficit takes shape in Albany