VANCOUVER — The one key line shift the Sabres unveiled in practice here Friday is going to get a look in the game Saturday afternoon.

Rookie Rasmus Asplund has been so impressive in his 11-game stint with Buffalo that it seems inconceivable he's going back to Rochester, even as other Sabres return from injury. Asplund has been strong in his own end and on the penalty, value that goes behind his one goal and two points thus far. He gets a step up today, playing on a line with Jeff Skinner and Marcus Johansson.

Skinner and had a lot of continuity earlier this season with Johansson and Vladimir Sobotka but hat was wrecked when both were injured in Sweden. Johansson is back while Sobotka might be out for the season after knee surgery so Asplund is getting a chance.

"We think he's shown a grit to the game that's really interesting," coach Ralph Krueger said of Asplund after practice here Friday in the frigid University of British Columbia rink. "We think he's improving every single day and learning more and more what it takes to play in the National Hockey League. ... We're excited about what he's giving us and with Skinner and Johansson, it's a little bit back to the Sobotka-Johansson-Skinner combination that seemed to have some magic within itself."

Eichel Watch: Repeating Jack Eichel's key stats from today's story: The Buffalo captain has a point in 11 straight games and getting one today to push the streak to 12 would be a career high — and the longest by a Sabre since Tim Connolly rang out 16 straight midway through the 2009-10 season. Eichel (18-21-39) is seventh in the league in scoring and tied for fifth in goals. 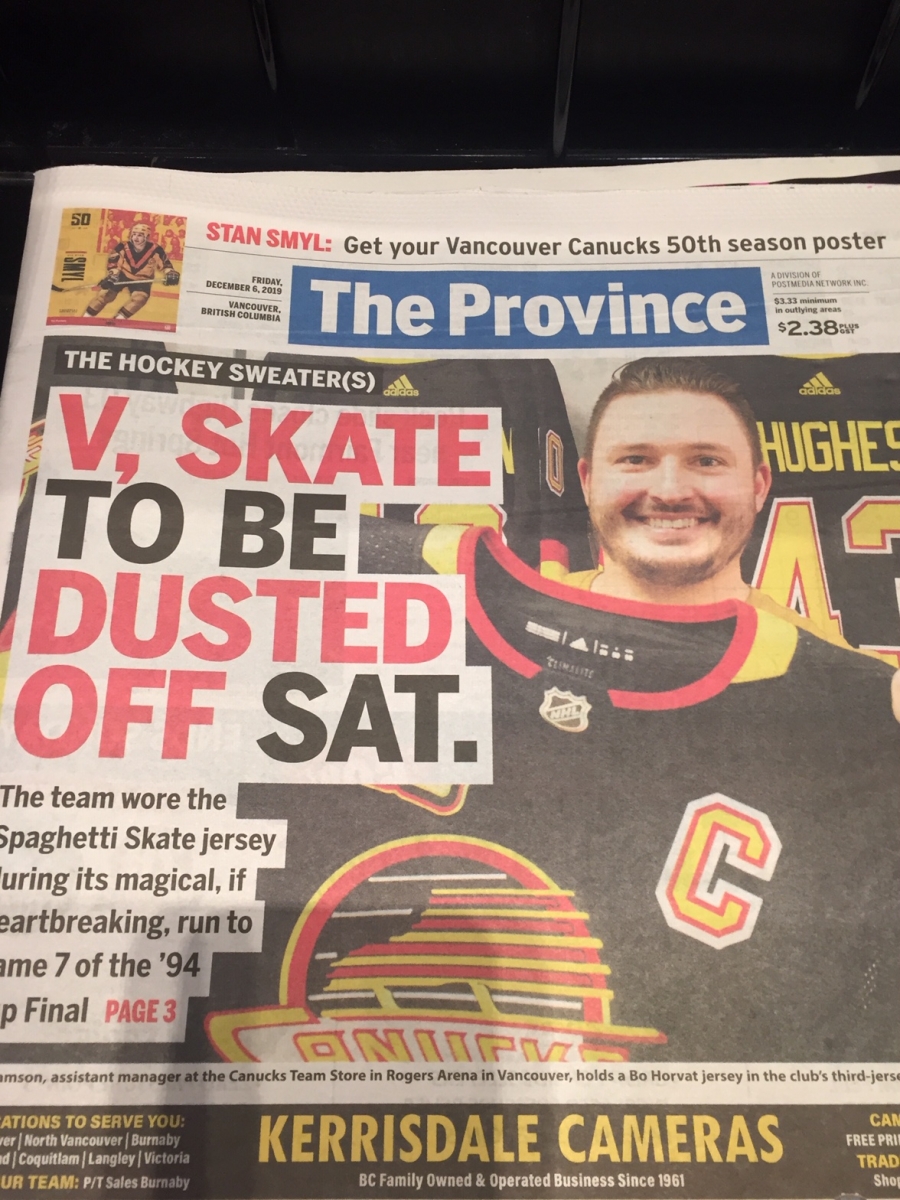 Uniform watch: It's '80s day for the Canucks, as they celebrate their second decade, just like the Sabres will do on Thursday when Nashville comes to KeyBank Center. The Canucks will wear their gold "V" sweaters made famous by the 1982 Stanley Cup finalists during warmup and their black skate jerseys during the game. The appearance of those jerseys, famously worn during the '94 Cup final against New York, was front-page news here Friday.

In the nets: Carter Hutton goes for the Sabres today, trying to snap his eight-game winless streak. Hutton has no wins since  Oct. 22. and is 0-5-3, 3.77/.883 in his last eight — after a 6-0 start. He made 41 saves in his last start, the 2-1 overtime loss last Saturday in Toronto where he played strong until flubbing John Tavares' 35-footer off the glove in OT.

"His attitude is good," Krueger said during his pregame briefing today. "He takes a defeat as personally as anybody here on this roster but also recovers with a good attitude the next day pretty quickly. His fight and disappointment off the last game will activate some motivation for the rest of the team to play for him and to play hard. There's no question in that last game he gave us a really good chance to win but it was disappointing in overtime."

The Buffalo lineup: It's a return to a 12-6 alignment, with Kyle Okposo returning after missing 11 games with his latest concussion. Evan Rodrigues and Colin Miller will be healthy scratches. Here's how it looked at practice Friday:

Kyle Okposo has been going full-bore out here and is back with Johan Larsson. ERod has been bouncing in lines 3-4. The newish #Sabres look:
Olofsson-Eichel-Reinhart
Skinner-Johansson-Asplund (much better for Skinner)
Girgensons-Larsson-Okposo
Vesey-Mittelstadt-Sheary

Power play update: The Sabres are only 3 for 47 since Nov. 1 — last in the NHL over that span at just 6.3 percent. But getting a goal in the final minute Thursday in Calgary gives the team some hope after the 0-for-7 disaster that stretched over that game's first 59 minutes.

"We just have to get some speed in our puck movement and be hungrier on bringing shots in the net," Krueger said. "(On the Eichel goal), Pucks were moved. Shots were taken. There was an an urgency in the execution and we need to feel that from our first power play."

The Canucks, meanwhile, lead the NHL with 30 power-play goals and are fourth in conversions at 26.8%

Canucks update: Reigning Calder Trophy winner Elias Pettersson leads the Canucks in scoring (12-20-32) while the revelation has been forward J.T. Miller (12-17-29), who is second on the team in points after being acquired in the summer from Tampa Bay. Miller  hasn't had more than 13 goals in any of the last three seasons. Rookie defenseman Quinn Hughes, taken No. 7 in 2018 and the brother of 2019 No. 1 overall choice Jack Hughes, is at 2-21-23. He leads all rookies in assists and is third in scoring behind Colorado's Cale Makar (28) and Buffalo's Victor Olofsson (23).