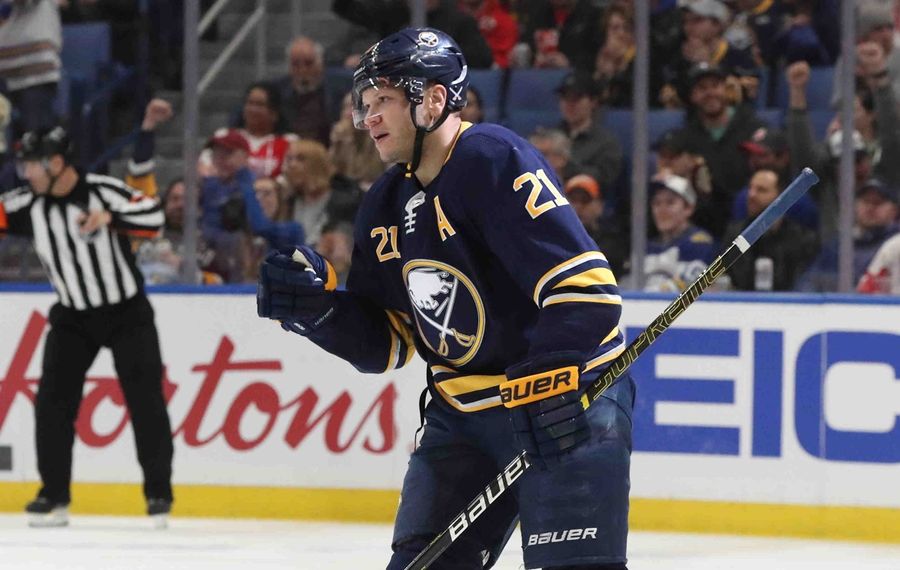 VANCOUVER -- After missing 11 games with another concussion that again had him pondering his career, Kyle Okposo's return Saturday lasted nine seconds before he found himself in the penalty box.

But the embarrassment of a neutral-zone tripping call soon went away as Okposo played well and even scored a goal in his return to the lineup, an uplifting sidelight from the 6-5 overtime loss to the Vancovuer Canucks.

"Obviously not the ideal start but glad we killed that one off," Okposo said with a pained smile when asked about his penalty. "Just a little bit of trying to be too much on my toes. If I've played every game, I'm probably just backing up and making a little read there."

Okposo played 10 minutes, 51 seconds in the game, had three shots on goal and five shot attempts.

His goal came at 5:24 of the second period on a short shot from the slot after a neat setup from Johan Larsson. It got Buffalo within 2-1 and was Okposo's second goal of the season. Prior to his concussion Nov. 16 against Ottawa, Okposo had gone 17 games without a goal. His other one came Oct. 5 in the home opener against New Jersey.

"I settled into the game, just tried to be hard on the puck and it felt great," he said. "I thought our line did a pretty good job tonight. We came out in the second period and gave up a quick one (Antoine Roussel's goal at 3:07 that made it 2-0). The game could have gone South from there but we showed a lot of character.

"We just played with a bit of a chip on our shoulder after they scored that second goal. They were taking it to us and we just started taking it to them."

The loss dropped the Sabres to 3-6 after regulation this season and they have lost five straight (four in overtime, one via shootout).

"Overtime just hangs on a thread and that momentum shows a little bit about the funk we're in right now," said coach Ralph Krueger. "We're hanging in the race but we need to make a stronger push forward. Solving OT and finishing these games we're getting ourselves back into or we're tying up late is certainly something we need to speak to and work on."

Krueger didn't have a big problem with Henri Jokiharju's interference penalty that gave the Canucks their decisive power play in OT. Jokiharju got his stick caught in Jake Virtanen's skates and took him down, allowing Jack Eichel a lane to the net to beat Thatcher Demko but the call wiped out the goal.

"I can understand the call because of it being literally a breakaway out of it," Krueger said. "It was definitely not intentional. 'Joki' wasn't even looking in that direction. A normal moment in the game, that might not get called. In a 3-on-3 overtime when it leads to a breakaway, you can see both sides of it and we just have to swallow it now."

"It looked like a hockey play where two guys get tied up," Eichel said. "I haven't seen it great yet. Does he call that? Does he take him out?"

Told that it seemed like the right call, Eichel nodded and said, "It takes a goal out of their net and puts one in ours and that's frustrating."

Maybe unintentional, maybe it wasn't. But had to be called. Especially in 3-on-3. Totally gave Eichel his lane to the net. https://t.co/buo29wL0XM

The Canucks, Buffalo's 1970 expansion cousins, celebrated 80s Night during Saturday's game and wore their black "skate" jerseys they unveiled in 1985 and are most remembered for wearing during the 1994 Stanley Cup final against the New York Rangers.

The Canucks wore their gold "Flying V" sweaters during warmups and they were auctioned to fans. Those were the ones they wore during their first trip to the Cup final, the 1982 sweep at the hands of the New York Islanders.

Former captain Stan Smyl and fellow '82 alums Harold Snepsts, Thomas Gradin, Darcy Rota and Richard Brodeur took the ice wearing the Flying V during pregame ceremonies and held a white towel aloft on top of their sticks in a tribute to the iconic incident during the Campbell Conference final in Chicago.

Late Canucks coach Roger Neilson, upset with the officiating during a Game 2 loss in Chicago Stadium, put a towel on the end of a stick in a surrender gesture. When the team returned home to Pacific Coliseum, fans furiously started waving white towels and the Neilson move is considered the start of the towel craze among fanbases.

The famous pose of Neilson, who worked with Scotty Bowman and coached the Sabres the year before he came here, is memorialized in bronze on the arena plaza.

Pacific Coliseum, the Canucks' home until 1995, still stands about 10 minutes east of the team's current downtown arena. It's used largely for trade shows and concerts and U2 has used the building for tour rehearsals, staying in town for up to a month.

Good news down on the farm as the return of winger C.J. Smith is imminent in Rochester. Smith missed his 11th straight game Saturday night with a lower-body injury but Amerks coach Chris Taylor told reporters in the Flower City that Smith should practice Monday.

"Hopefully be back by Wednesday," said Taylor, referring to Rochester's game against Wilkes-Barre/Scranton in Blue Cross Arena. "But we’ll take it day-by-day and see how he’s feeling, because obviously with anything you want to make sure he’s 100%."

Smith has three goals and three assists in 12 games but hasn't played since Nov. 2. He had 28 goals, 30 assists and 58 points for the Amerks last season, finishing second on the club to Victor Olofsson in all three categories.