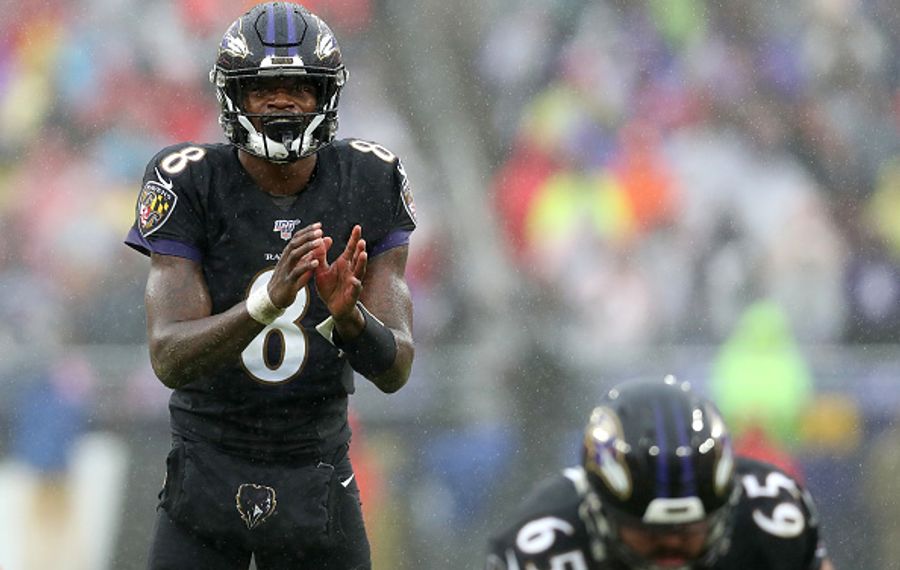 Here are my five takes on the Buffalo Bills' game Sunday against the Baltimore Ravens at New Era Field.

1. Let Lamar Jackson try to beat you with his arm.

It's somewhat risky, because Jackson is a highly effective thrower who leads the NFL with 25 touchdown passes. But by doing all they can to keep him contained and forcing him to throw, the Bills should have more opportunities to force mistakes, especially on what's expected to be a fairly windy day.

There is little doubt Ravens offensive coordinator Greg Roman will want to test the NFL's third-ranked defense and No. 3 pass defense to the fullest, as much for retribution as anything else. Roman has a well-known reputation within the league for wanting revenge against previous employers. Therefore, he likely has long targeted this game and will look to put together the most creative and aggressive attack possible to remind the Bills they erred in going along with Rex Ryan's ill-advised decision to send Roman packing after a little more than a season as OC.

The Bills are wise to extend the biggest of invitations to the Ravens' passing game by slow-playing their pass rush. That way, they avoid getting caught too far upfield and allowing Jackson to escape for one of his back-breaking runs, while keeping enough defenders in their secondary to enhance the ability to make interceptions or simply keep the ball out of the hands of receivers.

2. Don't get trampled by the rest of the Ravens' running game.

The Ravens lead the NFL in rushing. And it isn't only because of Jackson's team-leading 977 yards on the ground and seven yards per carry. Mark Ingram and Gus Edwards are major contributors with 837 and 460 yards with 5.0 and 5.1 yards-per-carry averages, respectively.

The Bills must be every bit as stout against the run Sunday as they were against the Dallas Cowboys on Thanksgiving, when they held Ezekiel Elliott to 15 yards through the final three quarters after allowing him to gain 56 in the first quarter, or at Miami on Nov. 17, when they gave up a mere 23 yards.

The Ravens have a big, physical and aggressive offensive line and large and powerful blockers in their tight ends and 303-pound fullback Patrick Ricard. Defensive tackles Star Lotulelei and Jordan Phillips, and linebackers Tremaine Edmunds and Matt Milano will need to be at the top of their games. But this also will be a huge test for defensive coordinator Leslie Frazier, to make sure he has gaps sealed and uses hard-hitting safeties Micah Hyde and Jordan Poyer in run defense.

3. Josh Allen shouldn't merely be the "other" quarterback in this game.

He's much more than that, as he demonstrated with a three-game stretch of playing some of the best football of his young career. Against the Cowboys, Allen showed exceptional poise, command and decisiveness to go along with pinpoint accuracy.

Brian Daboll's use of a hurry-up, no-huddle attack has arguably done the most to help transform the Bills into a team that can hold its own with the NFL's heavyweights. He has tapped into something that has allowed Allen to see and feel the game better than ever. Not only has the quarterback significantly cut down on turnovers, but he has done so without compromising his aggressiveness.

Allen's running might not get the same love as Jackson's, but it is highly effective and will pose a challenge unlike any the Ravens' defense has seen this season.

The Bills' offense also continues to benefit from having Daboll work from the coaches' booth, which allows him to get a much better view of fronts, coverages and adjustments. That will be particularly helpful against the complex scheme of Ravens defensive coordinator Don "Wink" Martindale.

4. The Bills can't allow their running game to be overshadowed, either.

The Ravens will look to attack Allen with a whole lot of blitzing and simulated pressure packages. Martindale tries to create the illusion of a pass rush but actually has defenders in coverage in hopes of drawing the QB into errant throws.

Working without a huddle, Allen should see opportunities, based on the type of defensive personnel the Ravens are using and their location, to spring Devin Singletary and/or Frank Gore loose for chunk gains on the ground.

The Bills also will likely look to use spread alignments that can help create openings for the run.

5. Special-teams play must be perfect ... or as close to it as possible.

So much fuss is made, and rightfully so, about all of the talent and dominance of the Ravens' offense and defense.

This club also has exceptional special teams. No surprise there, of course, given that their coach, John Harbaugh, came up through the ranks as a special-teams mastermind.

The Ravens have an exceptionally talented kicker in Justin Tucker, who gives their offense the luxury of calling plays with the confidence that they don't need always need to push for better field position to get in his range. Sam Koch is a tremendous punter/holder, and Morgan Cox is an outstanding long-snapper.

Stephen Hauschka has vowed to snap out of the funk in which he has been for much of the season. The Bills sent him a powerful message by putting in a waiver claim for another kicker, Chase McLaughlin, whose contract wound up going to the Indianapolis Colts.

In a game like this, there is virtually no room for miscues.

Here is what you need to know for the game Sunday.

Point spread: The Bills are a 5.5-point underdog at footballLOCKS.com.

Did you know: In the past three weeks, the Bills have 15 sacks, tied for the most in the NFL. Rookie Ed Oliver leads the way with four sacks. His five for the season is best among all rookie defensive tackles.

Next: When you're playing at the level of a contender, you get the chance to have more people watch you. That's why the Bills and Pittsburgh Steelers had their original 1 p.m. kickoff at Heinz Field next Sunday moved to 8:20 p.m. and will play before a national television audience on NBC.