For many in the packed Key Bank Center Thursday night, seeing Celine Dion live was the thrill of a lifetime. A beloved icon, in the flesh.

She hasn’t performed here in more than 10 years, the urgency of which you could feel in the arena lobby. People dressed for the occasion. It was an event.

When she sang a solo version of “The Prayer,” her popular duet with opera singer Andrea Bocelli, some appeared to be having a religious experience about it. A lady behind me said, in effect, “Well, we can go now.” Christmas came early for her. I buy that idea, even if I don’t buy the song.

Celine has always been a natural wonder. Her voice is something few popular artists possess. She doesn’t sing; she soars. She doesn’t perform; she connects. And it's with humility that you can believe. I think this career must be a thrill for her, and her gratitude toward fans never mistakes for obligation.

This is a kind of star power you feel good for investing in, because you feel the return in your bones. Celine is a pro at theatrics, but the look of surprised joy on her face is like an actor breaking the fourth wall. A real connection. 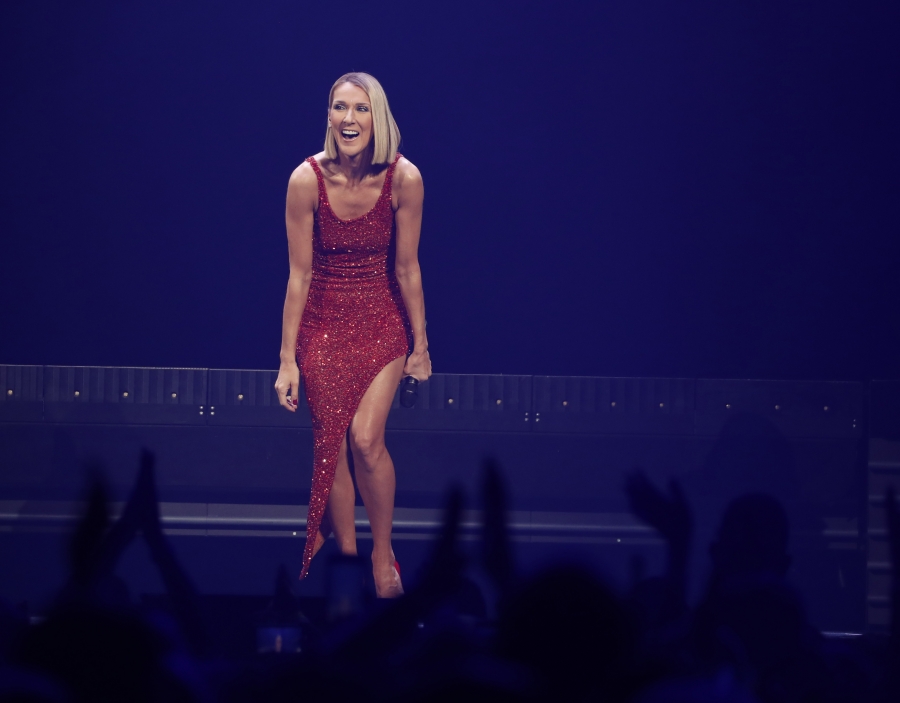 Celine Dion reacts to the audience during her concert at KeyBank Center. (Sharon Cantillon/Buffalo News)

Beyond the stargazing, she also is a strangely entertaining figure. She says weird things, makes wacky faces and shows a puzzling logic in choosing cover songs. A show-closing medley of David Bowie, Queen, Prince, Tina Turner and Patti LaBelle was fun in a Vegas-y way, but hardly in her wheelhouse as a musically conservative white lady from Canada. She can do what she wants, of course. But I’m not sure we needed that.

What did work, however, was a backlog of greatest hits, one right after the other. These songs helped define the 1990s and 2000s.

Backed by a 17-person band, with strings and horns and backup singers, upbeat songs like “I’m Alive” and “That’s the Way It Is,” sounded even more vibrant. Early hits “If You Asked Me To” (another LaBelle cover) and Jennifer Rush’s “The Power of Love” felt full of zest. Her fit, youthful appearance put a spring in her step, too. She looks like she feels good, and is dressed to the nines.

The huge-in-Japan “To Love You More,” with its ascendant finale duet of violin-and-voice, brought the crowd to arm-swaying agreement. This might be one of her best album tracks that you don’t know. Get to know it.

The Jim Steinman-penned “It’s All Coming Back to Me Now” opened the show with great drama. The epic power-ballad makes Meatloaf sound like chopped liver. She lays it on thick here, with great dramatics.

Does she need to be so flamboyant with her presentations? Does her voice need theatrical interpretations to convince us she’s the greatest singer in the world — as once proclaimed in a "Saturday Night Life" impression? Certainly not. But neither did Freddie Mercury, and we love him for all the extra that he brought to the table.

In her most extra display of extra-ness, her “Titanic” finale was performed surrounded by flying lit drones, which swirled a constellation around her large couture gown. She appeared either falling to the bottom of the ocean or floating to heaven.

Wherever you look for Celine, she will be there. So glad she could be here with us again. And even if you don’t count her among your stars — if, say, your wife dragged you to the concert and it did nothing for you — at least she did this: “How about those Bills?”