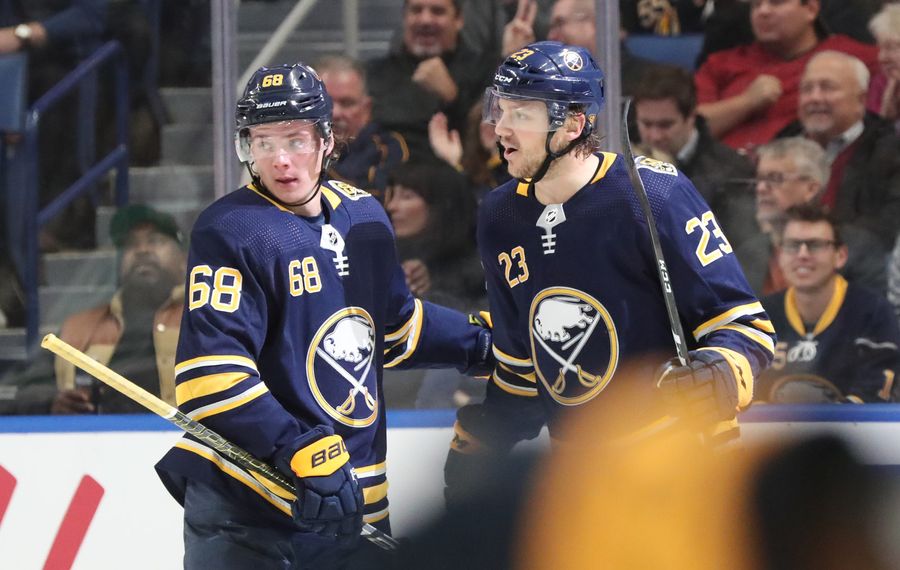 Keeping with the theme of the night, it doesn't take a deep breakdown to say the Buffalo Sabres' special teams are at DEFCON 1.

Their 4-3 loss to the Calgary Flames in Scotiabank Saddledome can almost exclusively be pinned on a hideous power play.

The Sabres were 0 for 7 until Jack Eichel scored with 47 seconds left and Linus Ullmark on the bench for an extra attacker. That was Buffalo's third chance at a two-man advantage on the night. The first two were feeble.

The power play failed on one 5-on-3 that could have produced a 2-0 lead in the first period. And it endured its greatest indignity when Tobias Rieder gave the Flames the lead for good, 2-1, in the second period by blocking a Henri Jokiharju shot and beating Ullmark on the ensuing breakaway for a short-handed goal.

The Flames, meanwhile, got a Johnny Gaudreau goal on their only power play over the first two periods. Big difference.

"Again, the specialty teams shifted the momentum in their favor," said coach Ralph Krueger. "And for them to add a dagger in by scoring on the short-hander was a turning point in the game. We had a really bad second period overall. ... We just gave up all our principles for a stretch and couldn't find it back in the third."

The 1-for-8 night left the Sabres at 3 for 47 on the power play over the last 16 games and they are last in the NHL with the man advantage since Nov. 1.

Victor Olofsson and Jack Eichel thrived on the flanks firing one-timers over the season's first 10 games or so. Opponents have choked off those passes and Krueger has been unable to adjust.

"They pressured us all over the ice and you really saw that on their PK," said Olofsson, who scored his first six goals of the season on the power play but hasn't connected since Oct. 16. "We just have to keep it simple. We always want to make a nice play and try to find that perfect chance all the time."

The Sabres have never looked worse this season than they did in the third period of this one, when they could barely connect on a simple 5-foot pass with the man advantage.

"That's your assessment of it," bristled Sam Reinhart. "I don't know about that. I think there's times in the game where we weren't at our best but I don't agree with that assessment."

For his part, Krueger acknowledged the passing issue.

"We're going to go to the drawing board. We're going to try to look for simplicity and add that to the work ethic we need on the power play to get it going."

Krueger is going to need a lot of luck. The Sabres miss Ramsus Dahlin out top and pulled Jokiharju from the spot in favor of Rasmus Ristolainen after the Rieder goal.

Despite the personnel change, Krueger absolved Jokiharju of sole responsibility on the play, when the 20-year-old's shot was blocked and the Flames got a clear breakaway.

"We need to read that and support him better than we did," Krueger said. "That lack of support really led to the goal against."

"Obviously the bounce was pretty tough for me on the blueline," said Jokiharju.

The Sabres took a 1-0 lead on Reinhart's deflection at 3:29 of the first period but failed to extend the lead with the man advantage. The game was ultimately lost right then and there.

"We had a good start for the game and the second period was still a 1-1 game," Jokiharju said. "But those things turned around and it's frustrating they turned the game that way."

"Our biggest thing when our power play isn't working," Reinhart said, "is we've got to do our best to not let it affect our 5-on-5 game, which is a tough thing to do."

The team will convene for practice again Friday in Vancouver. It's pretty clear what the point of emphasis will be.