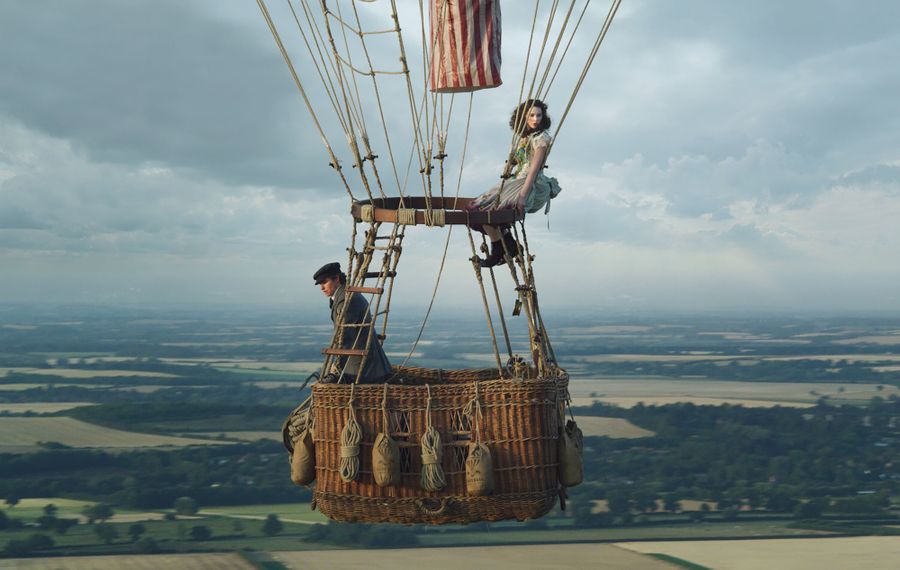 Some advice: I know movie theaters now are full of acclaimed movies crawling with big pedigrees but don't, for a minute, expect "The Aeronauts" to be inconsequential or boring. Yes, it's about 19th century British balloonists who set ascent records by going 8 miles up and virtually inventing meteorology in the process.

The movie is far from a dusty history of science. It is, eventually, full of hand-wringing suspense, heart-thumping adventure and even comes up with one unexpected dramatic wallop in a flashback before it's over. You will, if you're like most of us, admit that you never gave a lick of thought to 19th century balloonists. After you see "The Aeronauts" you'll have established, forever, a new occupation for heroic knowledge expansion for our ambitious species.

It is no small gift of this film that it stars Eddie Redmayne and Felicity Jones of "The Theory of Everything" (2014). They played Stephen and Jane Hawking, respectively, in that film. Redmayne, quite deservedly, won an Oscar for his performance as Stephen Hawking in which a conventionally "showy" role was performed with power, grace and almost miraculous subtlety.

"The Aeronauts" brings Redmayne and Jones to the center of the movie again, but this time it's Redmayne who is paying Jones back for her yeoman support in "The Theory of Everything." This time, it's Jones' movie. She's playing a flamboyant balloon "pilot" who is the 19th century daredevil partner of a committed scientist who is out to prove that conditions in the earth's upper atmosphere can predict the weather on your street.

He is eventually providing employment for a teeming horde of charmers, scholars and pedants for hire by TV stations throughout the Western world. But as Redmayne plays British scientist James Glaisher, the movie surprisingly pushes him to the side so that it can become a tale of gender empowerment focusing on a fictional woman trying to establish herself in a male-dominated profession (airy daredevilment).

There was a real James Glaisher. Amelia Wren, on the other hand, was made up by writers Tom Harper and Jack Thorne out of a patchwork of stories involving men and a female balloonist or two. Chief among the real sources was Glaisher's partner in his most influential ascent, a fellow named Henry Coxwell who has, to all intents and purposes, changed genders and gone into show business as Jones, the real star of this movie about the terrors and discomforts of suddenly finding yourself 39,000 feet in the air. (Shall we, at this point, all get together and sing a rousing rendition of "Eight Miles High" along with the Byrds?) Coxwell has been stuffed back into history's closet full of mothballs so that this movie could give us a flamboyant female daredevil balloonist who is Glaisher's designated pilot on his journey to hitherto unknown heights. She also, quite literally, becomes his lifesaver, as Coxwell, historically was.

Let me confess that I am, like many, mildly acrophobic. I am, if not exactly afraid of great heights, certainly uncomfortable as can be when I encounter them. I am, then, already on edge watching a movie that takes place tens of thousands of feet up in the open air, while looking around and down with casual frequency. The sights to be seen in this movie are astonishing (an IMAX version exists which must be gut-clincher for sure). Throw in freezing temperatures and the inherent flimsiness of traveling in a balloon and you've got a lot of excitement attached to scientific mumbo-jumbo.

It's both a suspense film and an adventure film that took real 19th-century achievement as a starting point and grafted 21st-century gender reckonings and aspirations to the top of it.

And then, a BBC pro named Tom Harper became the co-writer and director so that two superb British movie actors could reunite to do fine work again. A final word: this is a terrific adventure film for teens. It is much too strong though for little ones – especially its one unexpected flashback dramatic wrench toward the end.

Eddie Redmayne and Felicity Jones re-team in a fact-based tale of two 19th-century British balloonists who ascend a record eight miles up and make the modern world safe for meteorology. Directed by Tom Harper. 100 minutes. Rated PG-13 for some peril and thematic elements. Opens Dec. 6 in Dipson Amherst and Eastern Hills.