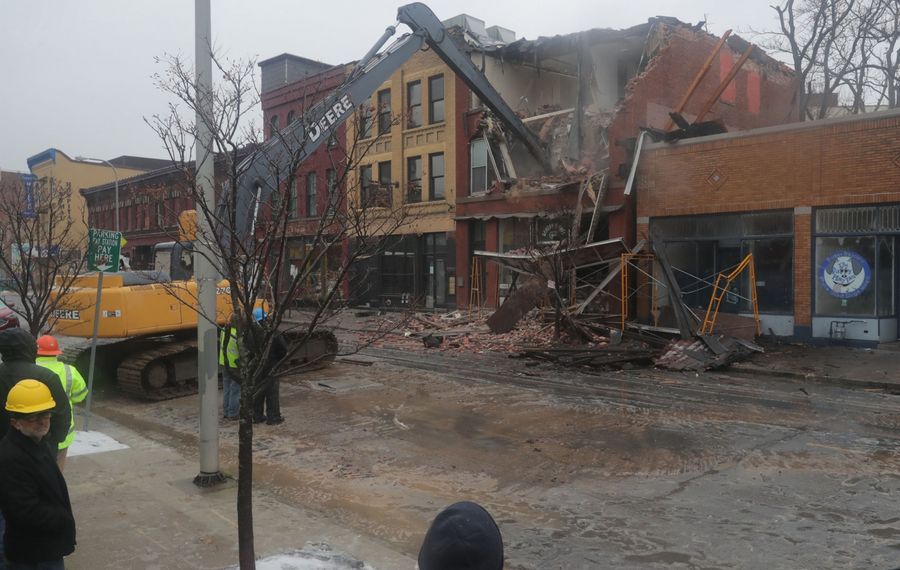 When the chimney caved in and a part of the facade crumbled in late August, that was the time for city housing officials and Housing Court to do more to save the Civil War-era building at 435 Ellicott St. on one of downtown's most historically intact blocks, a preservation official said Thursday.

But nothing happened to the building.

Then more roof damage occurred this week to the circa-1860s, three-story Italianate building, triggering its emergency demolition on Wednesday.

The building was one of several properties owned on and around Ellicott by Bruce H. Adler, 72, who lives downstate and whose business, Buffalo Properties Ltd., is registered in Nyack, an inner suburb of New York City. Adler could not be reached to comment.

"I took him to housing court 15 years ago and nothing was done then," said Rocco Termini, a developer who owns property on the block. "He owns six more buildings in the same condition, and still nothing is done.

"What we need is to get the housing judge down there, order all of the buildings open and have inspectors look at them," Termini said. "They're all in the same condition. He bought them in a foreclosure many years ago and has done absolutely nothing."

But Housing Court Judge Patrick M. Carney said he has never had the building's problems brought before him.

When the chimney collapsed in August, two upstairs tenants had to move out and Two Wheels Bakery and Cafe on the building's first floor had to close.

The building was next door to Toutant restaurant and two doors down from Maureen's Buffalo Wholesale Flower Market. The Puppy Playpen, also next door, was forced to move out in August.

"We were recommended by the city permits and inspections office not to go back in there, and we abided by that," Puppy Playpen owner Bob Higgins said.

Higgins said Adler complained to him in a phone call that the city was charging him "trillions of dollars" for the emergency crew that showed up in August, and Adler didn't think he would be fixing the building soon despite its weakened condition.

Termini said he thought there should have been immediate action to shore up the building after the August collapse and said so to city officials.

"When I complained to City Hall, they said Adler was waiting for his insurance money," Termini said. "That's a poor excuse."

The demolition is a devastating loss for the block, Termini said.

"Now it's going to be like a hockey player with a tooth missing," he said.

If Housing Court had taken immediate action after the partial roof collapse in August, the emergency demolition would have been averted, Fisher said.

Lou Petrucci, deputy commissioner of permits and inspection services, said his department cited six property violations on Aug. 22, following the chimney collapse, and one more on Sept. 4. The inspector's reports, however, did not reach Carney before the second roof collapse prompted the city's fire commissioner to declare an emergency demolition.

"It was written for court, but it had not been arraigned yet or made it to Carney’s desk," Petrucci said. "It’s sad, because the building deteriorated faster than the court case could catch up to it."

A structural engineer’s report requested by the department warned the property could not be occupied in the future without specified repair work completed.

Petrucci said Adler removed loose brick and put up scaffolding, but didn’t make the repairs specified in the engineer’s report.

In the end, an historic building was lost, two tenants lost their homes and two businesses were forced to close without warning, with the bakery losing tens of thousands in baking equipment.

Petrucci said Buffalo Properties has a buyer and is scheduled to sell its multiple properties on Friday. Petrucci said Legacy Development told him it is willing to absorb the demolition to acquire the buildings.

If the sale goes through, it won't be soon enough for Fisher.

"There are a certain class of property owners who see their buildings as a potential lottery ticket, and don't necessarily see themselves as part of a community," Fisher said. "But they are really parasites on our community."