Monday night’s offensive explosion – a 7-1 rout of the lowly New Jersey Devils – had all the makings of a breakout game. The Sabres put five of the first 15 shots behind Devils goaltender Louis Domingue, then scored a pair against Mackenzie Blackwood. Conor Sheary had a pair of goals, Jack Eichel had a goal and a pair of assists, and Johan Larsson had three assists. For one night, all appeared well in Buffalo.

But the performance was indicative of something we have seen from this Sabres team in the past – an impressive blowout win on the scoreboard, but one that didn’t necessarily seem to represent improved play.

The Devils' goaltending tandem, which has been a disaster all season, struggled to make routine stops. And although score effects plagued this game to an unbelievable degree – any time you are up five goals in the first period, you should expect serious indifference from the team ahead – it’s hard not to notice that the Sabres still conceded 45 shots against. It’s also hard not to notice that based on the shot volume and the quality of said shots, we assessed that Buffalo managed to score seven goals on a base of 1.8 expected goals. In other words: Real concerns remain about the offense this team can generate on a nightly basis.

Why is that the case? HockeyViz’s shot maps do a great job visualizing where offense is being generated from, and in Buffalo’s case, it’s not in the dangerous areas of the ice. Most high-powered offensive teams generate their offense from just outside the crease and from the circles, whereas Buffalo’s offense mostly comes from the perimeter. 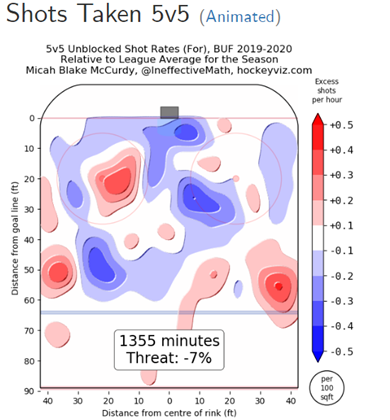 It is, to be sure, a volume issue. The Sabres – as they have been for a few seasons now – struggle to sustain offensive zone time and create multishot shifts. When compared to their peers around the league, the Sabres' attacking sequences just have less bite than the ordinary NHL team. And the only players who are really exceeding expectations across the board happen to be depth players, Marco Scandella and Henri Jokiharju: 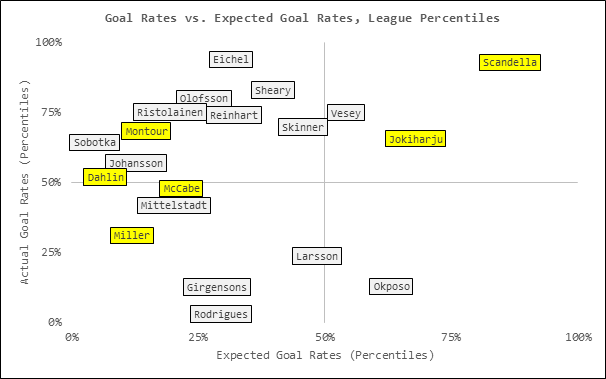 It is plausible that Eichel, for example, can do more with less than the average Sabres skater. Whereas his expected goal rates are middling, his actual goal rates are explosively high and they have been since he entered the league. But this is the sort of data that screams offensive regression – virtually every Sabres skater is seeing actual goal rates greatly exceed expected goal rates, and their percentile ranks against skaters around the league when it comes to expected goals are middling. And the word middling might be kind to a team in which only five players are in the 50th percentile or better.

If you think this type of regression is a boogeyman of sorts, I redirect you back to the Sabres of – well, last season. Remember Buffalo’s white hot offensive start? The expected goal rates were middling there, too. And as the season progressed and shooting rates stabilized, Buffalo’s attack fell off a cliff. 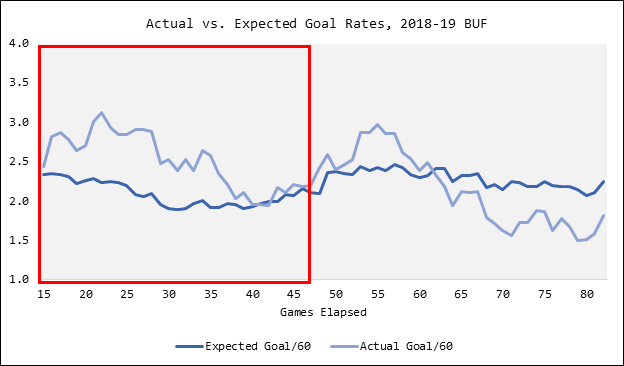 The Sabres, like last season, have managed to stay in the fight through the first two months of the season thanks to improved goaltending from Carton Hutton and Linus Ullmark and by routinely beating expectations offensively. It’s the latter that should be a concern for Sabres fans going forward, though – we have seen this story before, and when the bottom falls out, the scoreboard is going to start looking a lot less flattering.