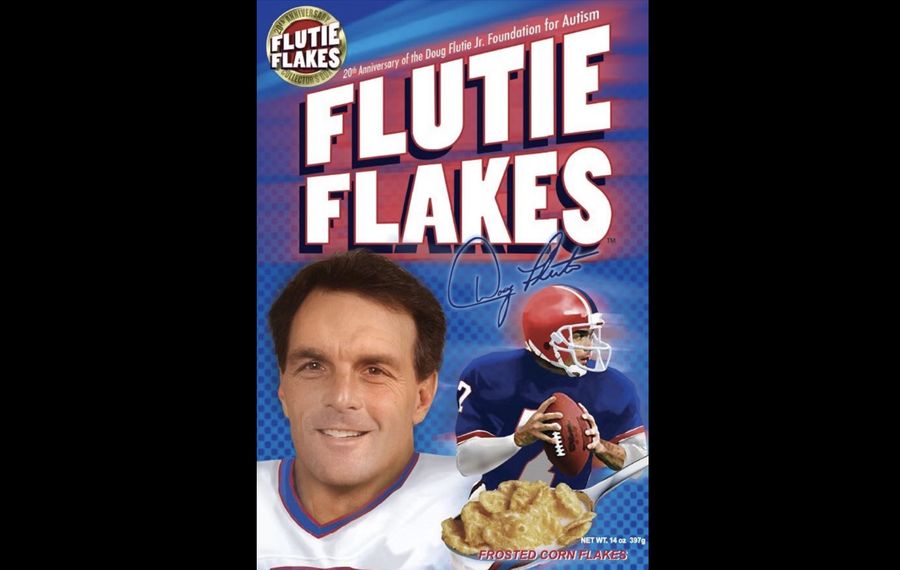 It has been 19 years since Doug Flutie threw a pass for the Buffalo Bills, but the legacy that includes a once wildly popular cereal bearing his name lives on.

At least, that's what the manufacturer of Flutie Flakes is hoping.

To mark the 20th anniversary of the cereal, Flutie Flakes will be relaunched beginning Sunday at New Era Field when the former NFL and CFL quarterback will be on hand to help "Lead the Charge" before the Bills face the Baltimore Ravens.

"It's pretty cool," Flutie said by phone Tuesday. "I talked about it with the 35th anniversary of the Hail Mary (touchdown pass he threw for Boston College to beat the University of Miami), people remembering. It amazes me. And it's been 20 years since the Buffalo thing and the Flutie Flakes and all that."

The 20th anniversary edition of Flutie Flakes, produced by Pittsburgh-based PLB Sports, will be available at Wegmans and FYE stores late next week, with portions of the proceeds going to the Doug Flutie Jr. Foundation for Autism. The cereal also can be purchased online.

Flutie is scheduled to sign a limited edition of flat cartons of Flutie Flakes, available for purchase with all proceeds going to the charity, from 10:30 a.m. to noon at the Bills' fieldhouse. Flutie Flakes T-shirts and caps also will be on sale.

According to Ty Ballou, president of PLB Sports, the initial run of Flutie Flakes sold 2.3 million boxes between a first edition in 1998, the year the Bills signed Flutie, and a second edition in 1999. Ballou said by phone there would be a "very limited run this time and we're going to see how it goes."

Ballou said he was stunned by the success of Flutie Flakes. He said his company first produced 20,000 boxes, but that Wegmans and Tops initially turned down a pitch to sell the cereal.

At the time, Flutie was a backup to Rob Johnson. After Flutie took over the starting job, and ran a bootleg for a touchdown in the final seconds to beat the Jacksonville Jaguars, the grocery stores had a change of heart. Ballou said Tops first purchased half of 20,000 boxes sitting in a warehouse, then bought the rest as "Flutie Fever" took hold.

He said Wegmans put in more orders, along with "every retailer in New England," and Loblaws in Canada, where Flutie won three Grey Cup championships. Even Walmart carried Flutie Flakes.

"I really thought I might get six months to a year, if I'm lucky two years, out of Flutie Flakes," Ballou said. "And we're turning the page to 2020. God bless Doug and Bills fans. There's nothing like those two on the planet."

"It just wound up being a perfect storm of things that happened," said Flutie, who at first wanted to endorse frozen pizza before Ballou explained cereal had a better profit margin. "The box was supposed to come out before season, but that got delayed. And by the time the box was coming out, I had just become the starter and played a couple of weeks, and the whole thing was taking off."

Flutie said the Doug Flutie Jr. Foundation for Autism has raised more than $20 million and given more than $14 million in grants.

"In the beginning, we put some money toward research, but we didn't feel like we were bringing enough to make a difference there, so we just strictly try to take some of that burden off the families," Flutie said. "And the Flutie Flakes had such a big part of that. We figured we would just do something locally, New England area, back home, help the local community. And when I started playing (for the Bills) and the Flutie Flakes things happened and we put the money towards the foundation, that automatically kick-started us and put us on the map nationally as far as bringing in money."

Ballou is a Chicago native who became a fan of Flutie when Flutie was a backup to Bears quarterback Jim McMahon. Flutie became a starter after McMahon was injured, a move that Ballou recalled didn't sit well with the Bears' faithful.

"Bears fans didn't like him and McMahon hated him," Ballou said. "I think (then-Bears coach Mike) Ditka and I were the only two people in Chicago that liked Doug Flutie. And he never got a legitimate shot there."

Five years after moving to Pittsburgh in 1991 to run Clark Candy, Ballou formed PLB Sports. Having done various food items endorsed by Pittsburgh-area athletes, he thought Flutie's arrival in Buffalo made for an ideal foundation for an athlete endorsement opportunity.

Flutie's performance, which helped lead to two playoff berths and a Pro Bowl appearance, did the rest.

"It's pretty neat that people genuinely sound excited about it," Flutie said of the 20th anniversary edition of the cereal. "And it's pretty cool to get back and just be around the team, at the stadium, which I haven't done. I've gone up there for Jim's golf tournaments and a fundraiser here and there, not nothing truly connected to the team. So this will be fun."

Doug Flutie on his Bills years, memories of Buffalo, the 35th anniversary of 'Hail Flutie'