Bishop Richard J. Malone will request an “early retirement” and exit as head of the Buffalo Diocese, a source told The Buffalo News on Monday, following an earlier report that Pope Francis was expected to accept Malone’s resignation on Wednesday.

Malone, 73, has resisted calls for his resignation for more than a year over his handling of a clergy sex abuse crisis that now includes more than 220 lawsuits against the diocese and more than 150 priests accused of abuse from decades ago.

Malone had long maintained that he would stay on as bishop until March 19, 2021, when he turns 75 and is required under Catholic Church law to submit his letter of resignation to the pope.

But his retirement announcement is expected on Wednesday, a source confirmed to The News.

The source said Malone discussed different options with the pope when he was recently in Rome with other New York State bishops.

Malone decided to pursue an early retirement, with an announcement expected on Wednesday, although with word starting to spread of Malone’s decision, the announcement could come sooner, the source said.

The early retirement was an option that the source described as a way to promote the good of the Buffalo Diocese with healing and reconciliation.

“The bishop is not being forced out,” the source said. 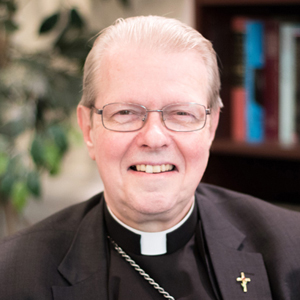 Online Catholic Church chronicler Rocco Palmo wrote Monday in his “Whispers in the Loggia” blog that the Vatican was expected to announce Bishop Edward B. Scharfenberger of the Albany Diocese will take over as apostolic administrator of the Buffalo Diocese until Malone’s replacement is named.

Scharfenberger, 71, the bishop of Albany since 2014, will be named as apostolic administrator in Buffalo, the source in Buffalo confirmed.

Buffalo Diocese spokeswoman Kathy Spangler said Monday that she had no comment on the report by Palmo, who wrote that four sources confirmed Malone’s pending departure. Palmo, a former U.S. correspondent for the London-based Catholic weekly The Tablet, has published the Whispers in the Loggia blog since 2004.

While Malone tried to cast himself as a reformer of past bishop practices, such as shielding the identities of predator priests, critics said he failed to move fast enough in revealing the full extent of historical abuses in the Buffalo Diocese and made mistakes in handling more recent cases of clergy misconduct with adults.

The most recent known accusation of a priest molesting a child in the Buffalo Diocese involves an alleged incident from 2001, more than a decade before Malone arrived here, and no evidence has surfaced to date showing that Malone actively covered up new allegation of child abuse against a priest.

Malone's retirement announcement will follow a Vatican-ordered investigation – called an "apostolic visitation" – into the bishop's handling of the Buffalo Diocese's sex abuse scandal. Brooklyn Diocese Bishop Nicholas DiMarzio spent seven days in Western New York interviewing nearly 80 area clergy and lay people. After wrapping up the investigation Oct. 30, DiMarzio said he would prepare a report to be submitted to the Holy See.

The source in Buffalo said Monday that an announcement was expected to be forthcoming from the Vatican in connection with DiMarzio’s apostolic visitation into the Buffalo Diocese.

Malone and DiMarzio were both in Rome three weeks ago, along with the other Catholic bishops from New York State, as part of an "ad limina" visit, which is held every five to seven years between the pope and bishops of each of 14 geographic regions in the United States.

Pressure had been mounting against Malone since August 2018, when businessman Paul L. Snyder, a deacon at St. Mary Church in Swormville, publicly called upon the bishop to resign, which was swiftly echoed by a local Catholic radio station, Rep. Brian Higgins and Lt. Gov Kathy Hochul.

Within the past 14 months, two of Malone's most trusted confidants — people who worked side by side with him for years — turned against the bishop, publicly demanding that he resign from the job he has held since 2012.

Another painful blow to the bishop came Sept. 5, when a group of prominent, influential and wealthy Catholics — the Movement to Restore Trust — also abandoned its support. Later the same month, a poll by The Buffalo News showed that 86% of Catholics or lapsed Catholics in Erie and Niagara counties wanted Malone to step down.

The Buffalo Diocese has been in crisis since February 2018, when the Rev. Norbert F. Orsolits, a retired priest, told The News that he had molested probably dozens of boys, an admission that led to revelations of cover-ups of clergy sex abuse complaints against other priests. The diocese paid $17.5 million to 106 childhood victims through a compensation fund and is now facing more than 220 lawsuits by others who allege they were molested as minors by area priests.

The diocese also is the subject of an FBI probe that includes the subpoena of diocese records and interviews of several dozen potential witnesses and a civil investigation by the state Attorney General's Office.

"It's about time," Michael F. Whalen Jr. said Monday, when reached by phone. Whalen, a South Buffalo man who was the first to accuse Orsolits, added: "He did it to himself. If he was just honest and truthful from the get-go, he wouldn't be resigning. They need to clean up. They need to get rid of everybody who knew about the abuse and didn't do anything about it."

Few Catholic bishops in the United States have been forced out of office over their handling of sex abuse complaints. Despite revelations of cover-ups of clergy sexual abuse in dozens of dioceses, just five American bishops or archbishops have resigned in the past 16 years prior to retirement age.

Pope Benedict XVI appointed Malone on May 30, 2012, to become the 14th bishop in the Buffalo Diocese's history.

The Salem, Mass., native was ordained as a priest in 1972 and served on the faculty of St. John's Seminary College in Boston and as chaplain at Wellesley College and Regis College in the late 1970s and 1980s. He also was Catholic chaplain at Harvard University and secretary of education in the Archdiocese of Boston.

Pope John Paul II named Malone an auxiliary bishop in Boston in 2000, a post that put him in charge of that archdiocese's south region. Two years later, following an expose in The Boston Globe, the Boston Archdiocese became the epicenter of a nationwide clergy sex abuse scandal.

Malone's superior, Cardinal Bernard F. Law, resigned in disgrace over his handling of abuse complaints, after 58 priests wrote a letter demanding that he step down. Malone repeatedly denied having any involvement in the assignment of abusive priests in Boston.

A letter demanding Malone step down circulated among Buffalo Diocese clergy beginning in September and received support from roughly two dozen priests and about a dozen deacons, though the names of the signatories weren't publicly released.

Prior to coming to Western New York, Malone was bishop of the Diocese of Portland, Maine, from 2004 to 2012 and was widely considered a rising star in the world of Catholic hierarchs. At one point, he was the head of a national committee of the U.S. Conference of Catholic Bishops charged with finding ways to bring lapsed Catholics back into the fold. He also led an effort in Maine to fight a referendum allowing same-sex marriage and went on CNN to defend the Catholic Church's opposition to gay marriage.

After he arrived in Buffalo, Malone continued to work as apostolic administrator of the Portland Diocese for more than a year, until his successor, Bishop Robert P. Deeley, was appointed Dec. 18, 2013.

Malone's tenure in Buffalo included other controversies, such as his decision in 2014 to shut down 10 suburban Catholic elementary schools suffering from low enrollments and the discontinuation of the Catholic Charities foster care and adoption program in 2018, after agency officials determined that state rules barring discrimination based on sexual orientation conflicted with church teachings.

But critics said his biggest missteps involved a lack of transparency about the extent of the abuse scandal in the Buffalo Diocese and a shortage of empathy when it came to dealing with victims of sexual abuse.

Malone took the brunt of the criticism for mistakes that were decades in the making and began with Buffalo bishops back to the 1950s and 1960s.

Per the terms of national policy of the U.S. Catholic bishops, Malone put 22 priests on administrative leave due to allegations of abuse lodged since March 2018. Investigations by an outside attorney substantiated claims against nine of the priests, who remain suspended as their cases proceed to Rome for a review. Nine other priests were cleared by the investigation and reinstated, and four priests are still on leave as a diocesan investigation continues.

But in some instances, Malone was spurred into action only after media coverage exposed alleged abuse or misconduct by priests. For example, Malone didn't remove the Rev. Fabian Maryanski from ministry until after The Buffalo News ran a story showing that a woman had complained in 1995 about alleged abuse dating back to the 1980s, when she was 15.

In March 2018, Malone also released a list of 42 priests who the diocese determined had substantiated claims of abuse against them, but the initial list excluded the names of dozens more priests about whom the diocese had received complaints.

The number of Buffalo-area clergy publicly accused of abuse – in lawsuits or media reports – now stands in excess of 150. Meanwhile, the diocese's "substantiated" list currently includes the names of 78 diocese priests and 22 religious order priests.