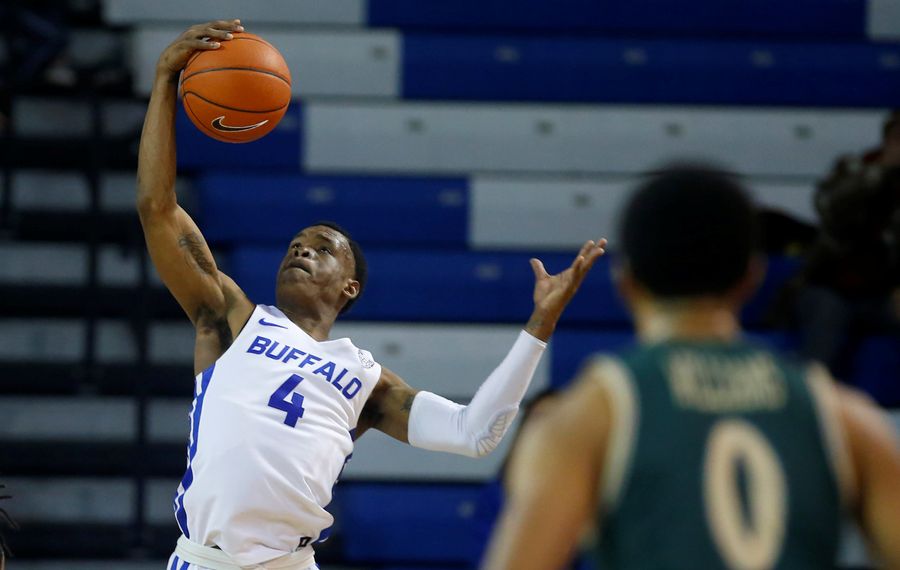 Jim Whitesell isn’t going to complain too much about the first seven games as head coach of the University at Buffalo men’s basketball team.

Sure, the season began with an upset, when Dartmouth handed UB its first loss at Alumni Arena in nearly two years.

But, Whitesell said, the Bulls took ownership of the loss. Since Nov. 8, the Bulls have lost only one game – to Connecticut in the Charleston (S.C) Classic – and Whitesell has seen a certain vigor develop within his team.

“That’s one thing I said to the group. ‘We owned it, so we’ve got to go back and work harder,’ ” Whitesell said Saturday after UB’s 88-77 win against William & Mary at Alumni Arena. “We’ve played a really good schedule in November, so I think that’s been a positive. Obviously, our schedule doesn’t get any easier, going on the road ... but I think these guys, one of the things we want to continue to do is grow.”

The Bulls (5-2) face Vanderbilt at 8 p.m. Tuesday at Memorial Gymnasium in Nashville. Then they’ll play DePaul at 5 p.m. Sunday in Chicago. These two games will offer Whitesell and the Bulls a definitive gauge of where they stand four weeks into the season.

“It certainly helps us,” Whitesell said. “You’re going to go there, you’re going to see bigger length. It’s like UConn. We did a lot of good things against UConn but after the game, our shot selection wasn’t good enough to win that game. Defensively, we thought we played well enough.

“Can we make that adjustment to do that? That’s the challenge when you go on the road. Also, lock in on that short prep time and see if you can do that. Great challenge, but that’s kind of why we scheduled those two games. They’re going to make you better, one way or another.”

After the loss to Dartmouth, the Bulls hit the reset button, and won five of their next six games, including a pair of comeback wins against Towson and Missouri State in the Charleston Classic.

“Coach, he really focused on getting back and showing the fans how we really play,” guard Jayvon Graves said. “We knew we stepped up that game, and we focused on what we can do to get better each week.”

The Bulls face a Vanderbilt team that’s been revived by first-year coach Jerry Stackhouse. The Commodores are 5-2 after finishing 9-23 and 0-18 in the Southeastern Conference in 2018-19, and shot an SEC-best 51% from the floor in its first six games. In a 67-58 loss to Tulsa on Saturday, though, Vanderbilt shot just 36%.

DePaul (8-0), which hosts Texas Tech on Wednesday, is shooting 49.4% from the floor, including 37.7% from the 3-point line, in its first eight games, and averages 41.1 rebounds per game. The Blue Demons also have allowed opponents an average of 63.8 points in a slate that includes wins against Minnesota, Iowa and Boston College.

“We’ve got to make another jump here,” Whitesell said. “It’s going to be good and challenging. We look forward to it, but we know we have a lot of work to do.”

UB guard Davonta Jordan said this week’s games at Vanderbilt and DePaul will tell his teammates a lot about themselves.

“It’s going to show where we’re at as a team, and as individuals,” Jordan said. “And how we play with competition. That’s something we’re really looking forward to. I really feel like we can go up there and do some damage.”

Entering the week, UB is eighth in the nation in offensive rebounding (15.14 per game) and is 15th in the nation in assists per game (17.6). After registering only nine assists in a 79-68 loss to UConn on Nov. 21, the Bulls have had 15, 18 and 22 assists in their last three games. They’ve also forced opponents into 15.8 turnovers in their first seven games.

“Continue to play through your mistakes,” Whitesell said. “You’re going to make those mistakes. (Saturday) was a good example. We had a runout, we turned it over, they run down, they miss it, we come back and end up getting a bucket. Keep playing. That’s why people like to watch, because it goes back, forth, back, forth. Along with it, with that mentality, make a mistake and keep playing.

“Earlier in the year, we were way too emotional when things didn’t go our way. The other team’s good, too, so keep playing. Our guys are starting to learn that and get a little more on the mental side of, ‘Hey, look, a big part of winning is playing through your failures.’ ”