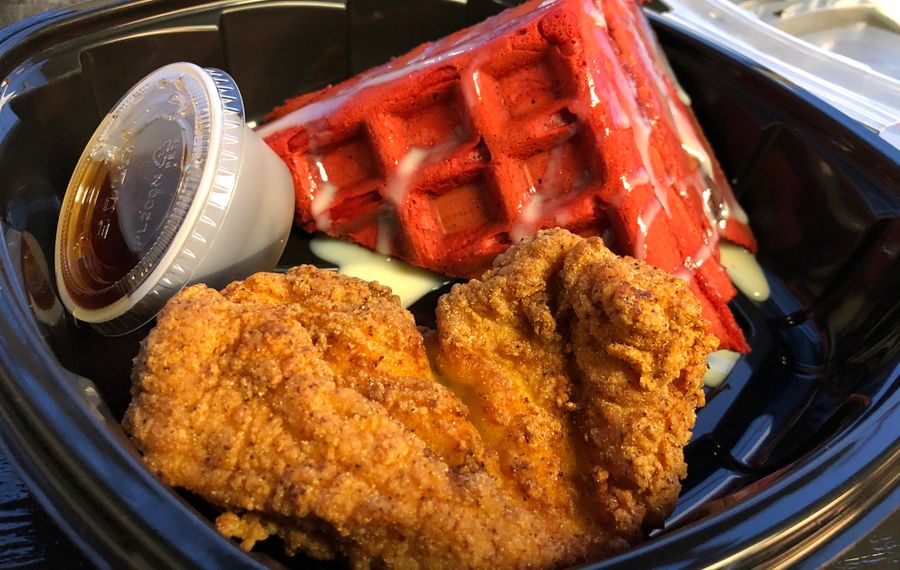 If you ask Jemarr Moody, there's no right or wrong way to eat chicken and waffles. The owner of the new Mumbles Chicken & Waffles prefers space between Southern partners; he'll pour hot sauce on the fried chicken and maple syrup on the waffles, then enjoy them separately.

"I'm just trying to keep them away from each other the best I can," Moody said, with a laugh, citing differences in taste buds.

The University Heights native understands some customers would rather carve off a chunk of fried chicken, add a forkful of waffle, dip the whole bite into maple syrup and then enjoy the contrast in flavors and textures all at once.

While this is Mumbles' first stand-alone restaurant, the brand has a background; Moody and a small staff served out of the Walden Galleria food court for 11 months – with the intention of getting their feet wet before finding their own space, which they inked in January at the old Nette's Fried Chicken. 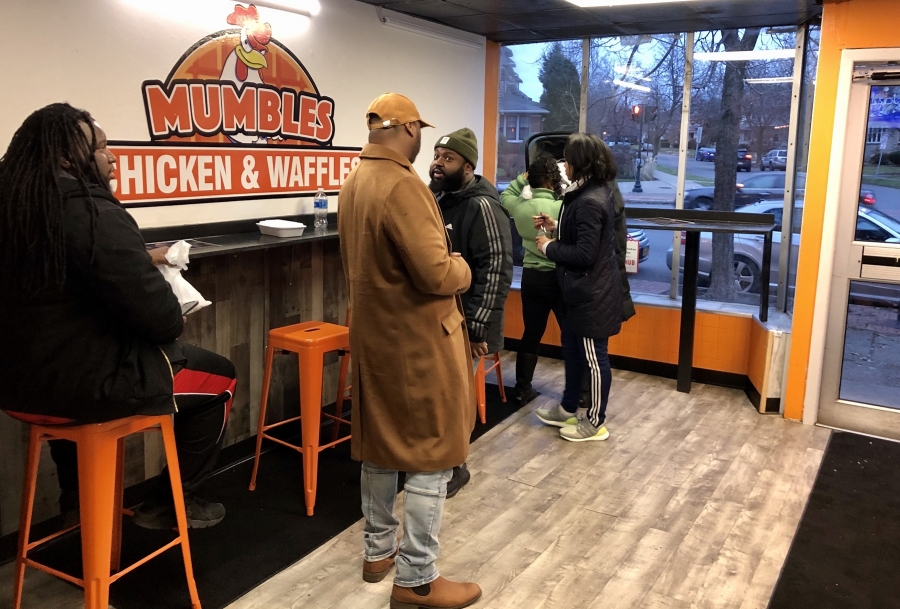 Customers either eat or wait for their food inside Mumbles Chicken & Waffles. (Ben Tsujimoto/Buffalo News)

The new Mumbles isn't big, but its eye-catching orange paint is tough to miss. The restaurant seats only 10, relies mostly on takeout business and won't serve alcohol. 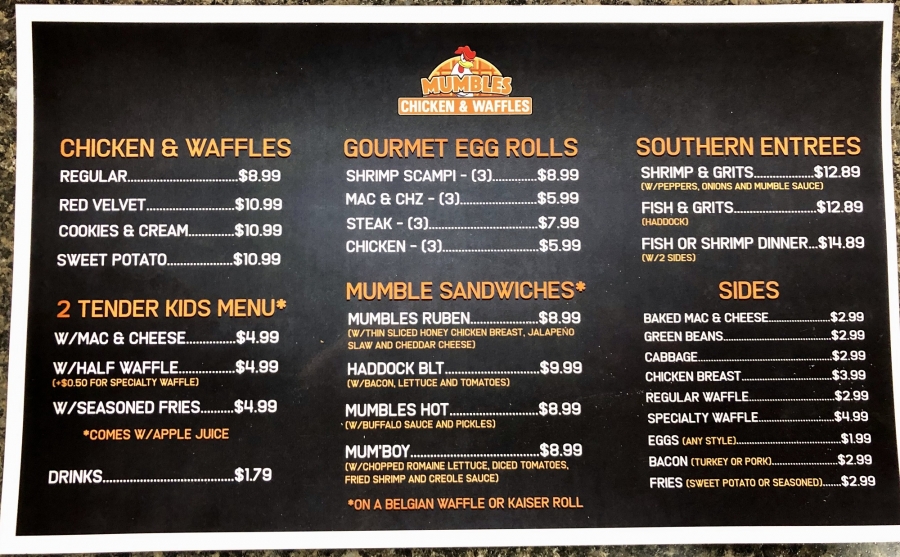 Waffle options include plain, red velvet, sweet potato and cookies and cream. There's virtually no crunch to the triangular treat; the fluffy texture harmonizes with the crunchy exterior of the boneless fried chicken, which maintains reasonable juiciness inside. (Be sure to sniff frequently while waiting for the order; the scents are glorious.)

When eaten in combination, the chicken-and-waffle duo isn't overbearingly sweet or savory – as long as you mind the syrup application (it's not real maple syrup, FYI). Moody suggested the steak or chicken version of the egg rolls, even though shrimp scampi was his brainchild; the chipotle mayo-esque steak sauce was the star, pairing well with the steak and overcoming the aggressive frying treatment.

While Moody doesn't have a background in restaurants – he owns call centers – he's well-acquainted with the neighborhood, as he grew up on Lisbon Avenue, just off Main, and attended East High School. He has fond childhood memories of the Gloria J. Parks Community Center, Doctor Bird's Jamaican store and Sharp Image, the barbershop that still sits just north of his restaurant.

Now a business owner in the neighborhood, Moody sees positive change occurring in an area where good news has been sparse (although this 2017 Anne Neville feature describes a more tame party scene). 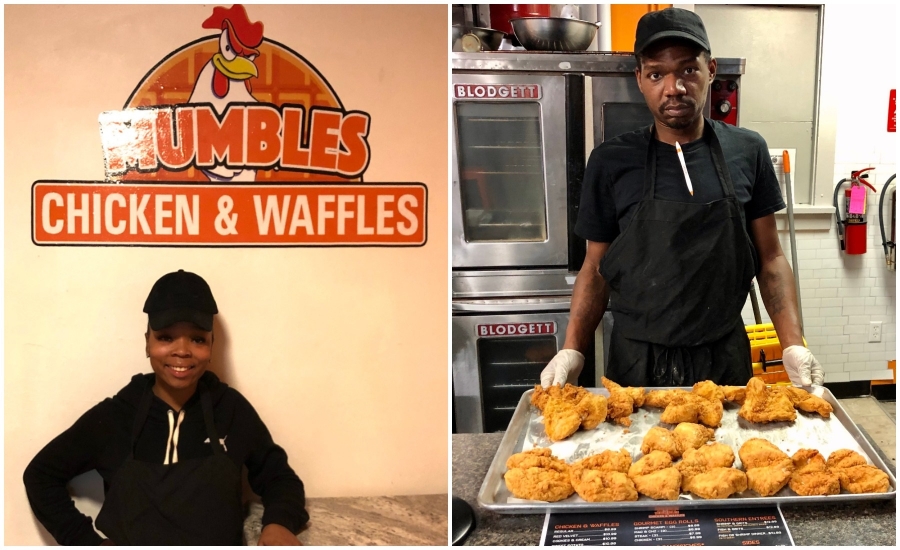 "I think it's a reputation we are fighting back against, as far as some of the places being closed down or leaving," Moody said. "I feel like we can show the community that we can do special things here."

"It's an exciting time [in University Heights] right now," he added. "We've got Wing Kingz coming down the street, so that's good, and @Eleven, he's opened up and done pretty well."

Moody intends to open a sit-down location by the end of next year and teased another food venture coming in the spring.

Wheelchair-accessible: One large step to enter. High stools for seating. 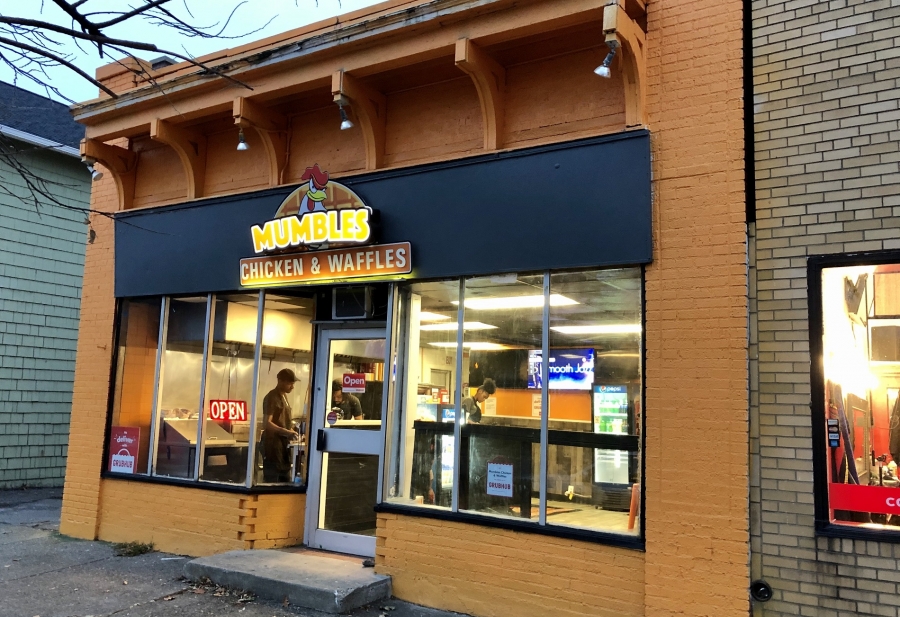