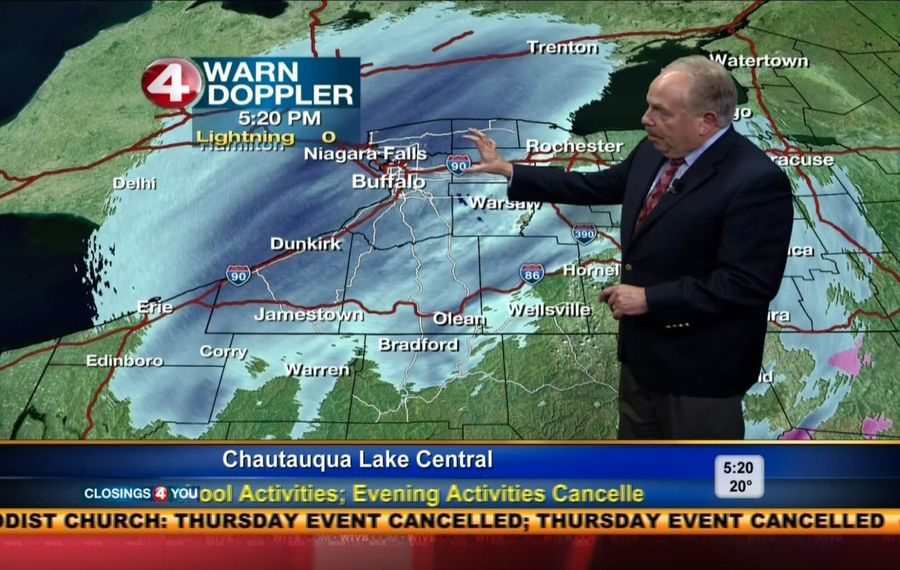 Chutzpah? I’m about to launch into some reflections on TV weather hype. I have no doubt a few of you consider me to have been one of the perpetrators of same, and in that context there could be chutzpah involved.

To be clear, hype is usually a separate issue from accuracy. If I see in the data and my decades of pattern recognition evidence that supports a forecast of 7 to 10 inches of snow, that’s what I’ll forecast. If we get only 2 to 3 inches, that’s an accuracy issue. If I set out to aim for higher numbers because it’s more exciting to do that, but I really have low confidence in those high numbers, that’s hype.

These days, I’m typically seeing more weather hype on network and cable news than I do from local television. Just as an example, "NBC Nightly News" had Al Roker huffing and puffing out two minutes of storm information several days in advance of Thanksgiving, stuffing it into a 45-60 second sausage casing. Roker is not a meteorologist, but he’s a very smart, talented broadcaster. Even Roker can’t help but to sound hype-ish at such a pace.

The advent of better graphics and video enables the network newscasts to headline predicted storm systems that used to be largely ignored a couple of decades back. When I was growing up, if the storm didn’t happen in New York City or Washington, D.C., it often didn’t make the network news unless fatalities or hurricanes were involved. Now, because audience research and focus groups show the public’s interest in weather is almost inexhaustible, weather is part of almost every 6:30 p.m. newscast.

You would think most broadcast meteorologists would be delighted with this newfound intense coverage. I haven’t done a survey, but I belong to a large Facebook group of broadcast meteorologists from across the country who, to a weathercaster, dislike hype. It’s not good locally, but we have more control locally of what we’re going to say and, to some extent, how our newsrooms are going to frame the coverage. Nationally, network hype causes a different kind of alarm. In the days preceding Thanksgiving, network newscasts were filled with breathless coverage of legitimate weather concerns for travelers. To me, totaling up the tens of millions of people currently under everything from dense fog advisories to blizzard warnings takes on an air of absurdity when repeated over and over.

There is less accountability for accuracy in national newscast weather predictions than there is at the local level. Network weather coverage receives no such intense audience scrutiny because it presents a big, fuzzy picture. It may be a headline service to lead more people to the detailed local forecast. Local TV meteorologists are still the No. 1 source for weather information for most of the public, but this dominance is slowly shrinking.

Actually, I take some pride in having been able to do an energized, conversational weathercast with a minimum of hype. True, if my confidence was high that a truly major impact lake storm would develop, I would communicate with more urgency. For something not quite as disruptive, here is a sample of how I handled things:

These days, the evening television weathercast has shrunk in importance to a limited extent due to social media and multiple platforms. Many people, especially those in the younger demographics, don’t wish to wait until local stations air their weather forecasts during the 5, 6 and 11 p.m. shows. They can get abundant weather information on other platforms. Some of it is good and some – from what meteorologists call “crap apps” – is just awful. Weathercasters and newsrooms have to serve up more product off-air as well as on. The interest in weather hasn’t shrunk in the least; it’s just being served in more fragmented ways. This doesn’t even include increased interest in climate change.

In the meantime, some basics haven’t changed. Most of us in local TV weather live in real fear of “the boy who cried wolf” syndrome. It is simply illogical for us to hype. By hype (I refuse to use the term “overhype” because it’s redundant), I mean to purposely exaggerate and/or imply greater certainty to a storm forecast than can be justified by the data and our own experience. Hyping beyond the evidence makes zero sense. Habitual hype is not a recipe for longevity in the broadcast marketplace. Yes, there are a few meteorologists and nonmeteorologists (not locally) who have gotten away with this, but most of us aim to produce as accurate a forecast as possible. The purposeful hype-sters tend to not be good at their job nor the science. It is vital to communicate uncertainty where it exists, just like your doctors do where the stakes are higher.

I was one of the lucky ones who was seldom asked to dumb down my product, and was permitted to treat the audience with respect for their intelligence. There are enough blown forecasts over the course of a career without adding to that small percentage by adding exaggeration. In fact, some bad forecasts come from underplaying a storm, as was the case for all of us locally in the October 2006 lake storm. In general, forecasting accuracy has incrementally improved by a large measure. A study published in Science magazine showed a modern five-day forecast is as accurate as the average one-day forecast in 1980. But, alas, it is human nature to remember either blown forecasts, or forecasts perceived to be blown. Some days, there are so many forecasts to choose from some people can’t remember who said what. I’ve gotten blamed for others’ blown forecasts but I think I received credit for others’ accurate forecasts about as often, even on my days off.

One last item at the local level: In the 31 American Meteorological Society conferences I attended, not once did I hear any of my colleagues advocate for numerous weather hits on all evening newscasts. Just about all of us prefer the chance to do one coherent, longer form weathercast each half hour, and to keep the “first weathers” brief. In the morning, with shorter viewing times, repetition and lots of short hits can’t be avoided. That’s one of my career blessings … I always worked evenings. Those morning news and weather people have to get up a lot earlier than I did in the Army. Crikey!