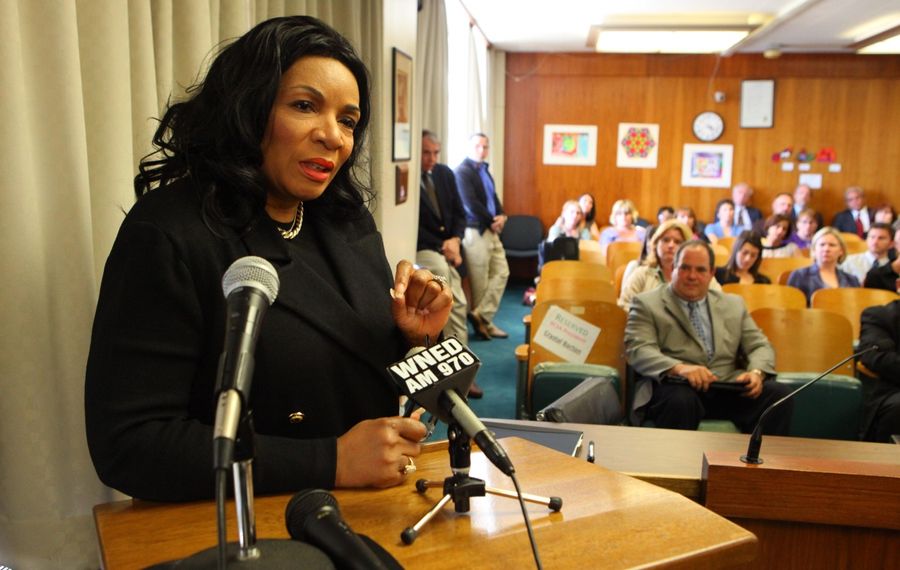 The Buffalo Board of Education is trying to fire Crystal Boling-Barton, the longtime, polarizing principal and union leader, after more than 2 1/2 years of keeping her on paid administrative leave, her attorney confirmed on Monday.

The school district, with authorization from the board, has filed formal charges that seek to terminate Boling-Barton and begin so-called 3020-a proceedings against her, which refers to the section of education law that gives tenured educators due process before being disciplined or removed.

The charges by the district stem from allegations of improper financial transactions that Boling-Barton made as far back as 2008 while serving as principal of McKinley High School, said Robert Boreanaz, attorney for the Buffalo Council of School Administrators, the union representing principals and other district administrators.

“They brought charges against her and that’s where we are now,” Boreanaz said. “This is the first time in over 2 1/2 years that she’s been out that the district has put on paper any allegation of wrongdoing.”

Boreanaz said the district is “grasping at straws” and that Boling-Barton will fight the allegations during the course of this process, which can be a lengthy one.

When reached for a comment Monday, Nathaniel Kuzma, general counsel for the school district, said: "This has now entered a new phase where there will be an administrative hearing and the district intends to pursue the charges and prosecute them to the fullest extent of its ability."

He declined to provide further details.

It was not immediately clear how much Boling-Barton had collected to date in the 30 months she has been on leave, but as of January the total had already reached $229,317. Kuzma, when reached late Monday, estimated the figure at around $300,000 to date.

Boling-Barton, principal at McKinley since 1987, was placed on paid administrative leave on May 11, 2017, after the New York Civil Liberties Union filed a lawsuit on behalf of a McKinley student who alleged discrimination against LGBTQ students.

The district eventually settled with the NYCLU, which dropped the case, but Boling-Barton did not return to McKinley, and instead became the target of a broader school district probe involving the alleged misuse of funds during her time as principal.

Boling-Barton asked a judge to force the school district to reinstate her in January of 2018, when attorneys for the district revealed an ongoing investigation that centered on African American artifacts she purchased for the school over the years using $22,000 in student-activity funds.

“Each principal has an account that they utilize for different educational resources each year,” Boreanaz said Monday. “They’re alleging she engaged in several transactions through that account that didn’t have the proper paperwork or wasn’t pursuant to a particular policy of the district.”

The school board, Boreanaz said, authorized the district to seek Boling-Barton's firing at its last meeting on Nov. 20, when the board met for hours in executive session with attorneys conducting the investigation.

It's not the first time Boling-Barton – who is also president of the Buffalo Council of School Administrators –  has been at the center of controversy.

A decade ago, a special investigator found that she was the driving force in an "excessive" seven-week suspension given to a student who denounced the principal for firing an assistant girls basketball coach. The issue caused a local media uproar because it forced the student to miss most of her senior basketball season.

Boling-Barton also tried unsuccessfully to get the state to remove a School Board member who was trying to hold her accountable.

Boreanaz believes it’s no coincidence that the board took action now. Boling-Barton filed a state Division of Human Rights complaint against the school district and Superintendent Kriner Cash, which is now being heard.

The Division of Human Rights enforces the law that prohibits employment discrimination based on age, race, sex and other classifications.

“They’ve sat on this and have tried desperately to make something out of nothing and at the last minute, before this Division of Human Rights matter came up, they throw something together," Boreanaz said, "and to my knowledge not all of the board members went along with it.”

Kuzma noted that Boling-Barton's complaint was filed six months after the district started its investigation.