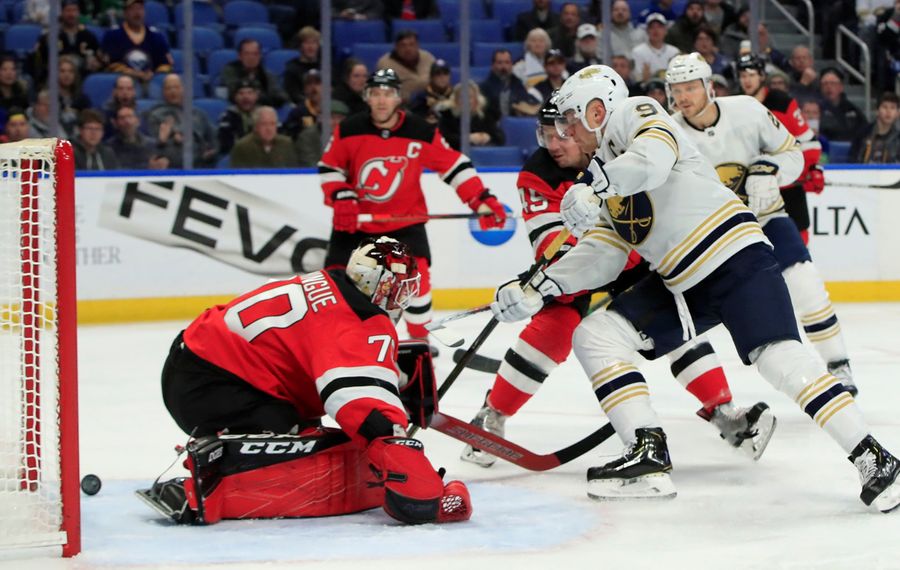 The onslaught in the first period Monday night began with Jack Eichel's shot from in front of the net and culminated with Rasmus Asplund celebrating his first goal in the National Hockey League.

New Jersey Devils coach John Hynes called a timeout and pulled his goalie, Louis Domingue, in response to the Buffalo Sabres' five goals during a 20-minute span in KeyBank Center. The damage was done, though. Eichel and the Sabres earned a 7-1 win over the Devils to improve to 3-1-2 in their last six games.

Buffalo (13-10-5) earned its first series win over New Jersey (9-13-4) for the first time since 2013-14 and moved into third place in the Atlantic Division, still 12 points behind the first-place Boston Bruins.

Eichel had one goal among three points, Conor Sheary scored twice and Asplund, Jeff Skinner, Henri Jokiharju and Victor Olofsson contributed a goal. Nico Hischier scored for New Jersey, which is last in the Metropolitan Division with 22 points.

Linus Ullmark made 44 saves for the Sabres, including 20 in the second period.

Breakdown: Eichel extended his point streak to 10 games when he broke a scoreless tie 2:46 into the first period. He was left alone in front of the net and had his wrist shot leak through Domingue. Eichel is one of four Sabres since 1989-90 to post multiple streaks of 10-plus games, joining Alexander Mogilny, Dave Andreychuk and Pierre Turgeon.

5-on-5 wizardry: Skinner pushed the lead to 2-0 when he retrieved a loose puck at the opposing blue line and rifled a shot to the far corner at 4:59 into the second period. Each of Skinner's 10 goals have come at 5 on 5, which is tied for the fourth-most in the league.

Breakthrough: Sheary scored his first of two goals at 6:57 into the first period off a Skinner rebound to make it 3-0. Sheary had not scored since Oct. 17, a stretch of 19 games. Hynes called a timeout following the goal.

Wide-angle shot: His second goal came less than 10 minutes later when Sheary fired a shot from near the left-wing boards. The puck ricocheted off Domingue's blocker and over his head before it crossed the goal line. Johan Larsson matched his previous career high of three assists, which he last recorded against Toronto on March 5, 2018.

Milestone: Asplund scored his first career goal with 58 seconds remaining in the first period on a wrist shot from behind the left faceoff dot, giving the Sabres a 5-0 lead. It was their highest single-period goal total since they scored five in the second period against New Jersey on Jan. 8, 2019.

Early exits: Domingue was replaced by goalie Mackenzie Blackwood for the second period and linesman Julien Fournier left the game to be evaluated for an undisclosed reason. The game continued with two referees and one linesman.

Goalofsson: Olofsson gave the Sabres a six-goal lead with a one-timer from the right-wing circle at 4:40 into the second period. Olofsson has a point in 11 of his last 13 games dating to Nov. 8.

Spoiler: Hischier scored on his own rebound for a power-play goal with 11:50 left in the second period to make it 6-1. The Sabres' penalty kill has allowed a goal in 11 of the past 13 games.

New look: Jokiharju, who was playing on the Sabres' top power play for the first time, scored with a slap shot at 12:08 into the second period to break Buffalo's 1-for-38 slump on the man advantage.

Seymour's wife, Jean, and their sons, Seymour H. Knox IV and Read Knox, as well as Northrup's children, Northrup Knox Jr. and Linda McLean, were on the ice for a pregame ceremony and video presentation ahead of puck drop. Owners Kim and Terry Pegula also participated.

Next: The Sabres will begin a three-game road trip to Western Canada on Thursday against the Calgary Flames.