Brace yourself for more ice, snow and freezing rain.

The winter ice storm that struck Western New York on Sunday causing accidents, power outages and an airport emergency is showing signs of sticking around longer than expected.

National Weather Service meteorologist Jon Hitchcock said the Sunday afternoon melting may be followed by a resumption of light freezing rain in the region Sunday night, which is expected to turn over to snow about midnight.

"The water and slush that out there may refreeze overnight," Hitchcock said. "It's not going to be a lot of snow, but there will be some slick spots for the morning commute."

That's why the weather service extended its winter weather advisory for all of Western New York until 11 a.m. Monday. Originally, it was to expire at 6 p.m. Sunday.

About 1 to 2 inches of snowfall is forecast in the Buffalo area, with 2 to 4 inches in eastern suburbs such as Clarence, and 3 to 5 inches in points farther east, such as Genesee and Wyoming counties.

But with temperatures around freezing, the snow will be too heavy to blow around, although Hitchcock said winds of 10 to 20 mph are predicted during the period.

"We're expecting a multi-day event," said Charles Eves, vice president of electric operations for New York State Electric and Gas. "The predictions for heavy wet snow is a concern for us." 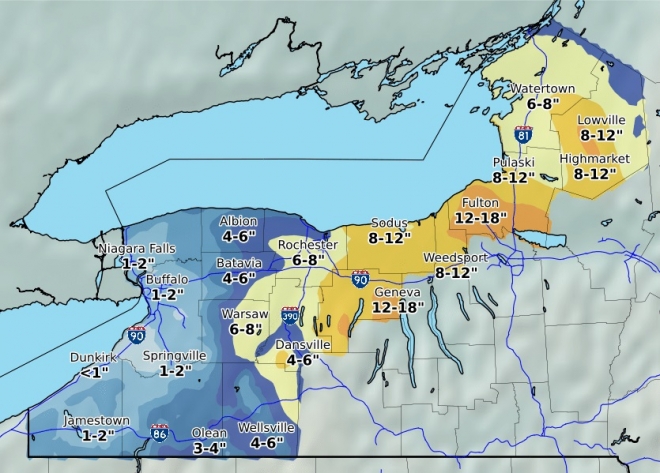 However, there were relatively few outages in Western New York.

As of 6 p.m. Sunday, NYSEG reported 487 customers without power in Erie County, mostly in Alden, and 376 customers in the dark in the City of Lockport, where a tree brought wires down at Pine Street and Gaffney Road about 5 p.m.

National Grid reported 370 customers without electricity as of 6 p.m. Sunday, scattered around Buffalo, Amherst, the Town of Tonawanda, Lewiston and Niagara Falls.

Eves said NYSEG mobilized more than 900 employees and contractors in anticipation of the storm, which he expects will hit hardest in Albany and the eastern part of the state.

"Snow, black ice, rain and wind are a bad combination — but this isn't our first rodeo and we pre-deployed significant state assets and personnel to prepare for the storm and maintain the roads," Cuomo said.

The dispatcher was referring to Hertel Avenue but she could have just as easily been talking about a street in the Northtowns or Southtowns.

The icy conditions also led to an Delta Air Lines plane sliding off the runway at Buffalo Niagara International Airport.

The plane, coming from LaGuardia Airport in New York City, was taxiing to the gate at about 8:30 a.m. when it slid on the ice and one of its wheels got stuck for a time.  There were 72 passengers on board but no one was injured.

Guarino said the passengers were evacuated down the airplane's stairs and taken by bus to the terminal.

"Business as usual," Major said. "Planes are coming and going. We've had a few delays but we haven't closed at all."

Elsewhere in the region, there were several accidents blamed on icy pavement. Accidents were most common north of Buffalo. Police dispatchers in Chautauqua County and extreme southern Erie County said they had little icing, although police in West Seneca and Orchard Park police said they handled several minor crashes.

To the north, police in Amherst, Lancaster and the City and Town of Tonawanda each reported a few accidents.

One accident in Niagara Falls looked particularly bad, as a car slid under a tractor-trailer on Niagara Falls Boulevard near Military Road shortly before 9 a.m.

However, the city fire department said the car driver seemed to have suffered only a scratch, although he was transported to Erie County Medical Center to be checked out.

Niagara Falls had another storm-related incident: a tree falling on a house at 2260 Weston Ave. a little after 1 p.m., and another tree reportedly fell into the street near the corner of Sixth Street and Ferry Avenue at about the same time. No one was hurt, the Fire Department said.

A car struck a pole and brought down utility wires on Park Avenue in Lockport about noon Sunday, but no one was hurt, police said.

The Niagara County Sheriff's Office reported a head-on crash on Route 31 near Griswold Street in Royalton, about 9:50 a.m., but the injuries were minor. Also Sunday, a vehicle rolled over at Klemer Road and Trail's End Lane in Wheatfield.

Police agencies across the region issued "traffic alerts" warning motorists of the slippery conditions and suggesting they allow more time to get where they're going.

"Please use caution if you have to travel," the State Police said in their alert.

Hitchcock said the snow will taper off from northwest to southeast during Monday, and Tuesday should be dry with a high of about 35 degrees.

Periods of snow, sleet or freezing rain will result in slippery roads and reduced visibility across Western NY Sunday and across North Central NY Sunday and Sunday night. Stay updated with the local NWS forecast and give yourself extra time to get to your destination. pic.twitter.com/ebIwo8F8QN