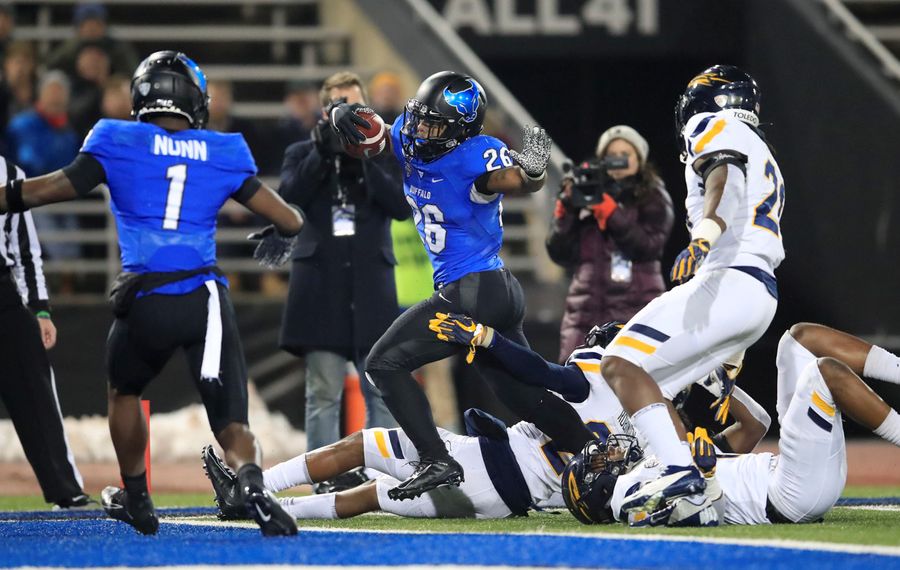 The next goal for the University at Buffalo is win a bowl game.

The Bulls will play Charlotte of Conference USA in the Makers Wanted Bahamas Bowl at 2 p.m. Dec. 20 in Nassau, Bahamas. UB (7-5) accepted the bowl bid Sunday, two days after closing the regular season with a 49-7 win against Bowling Green.

“Knowing that we’re going to the Bahamas, after securing that seventh win, it’s amazing,” UB safety Joey Banks said. “Words can’t really describe how me and the rest of the team are feeling about this.

“Bahamas? Idaho Potato Bowl? Sand ... or potato chips and French fries? Easy decision. I’m looking forward to having my feet in the sand and getting a little shade on my skin tone and enjoying the environment. It’s going to be an amazing experience. We’re down there, of course, to win the game.”

The Bulls make their fourth bowl appearance in program history, but this won’t be a normal holiday vacation. The Bulls aim for their first bowl win as an FBS program.

The idea of heading to a warm-weather locale in December is appealing to the Bulls. The fact that they have an opportunity to create history is appealing for UB, which earned bowl eligibility for the third consecutive season.

“We have an opportunity to do something that hasn’t been done here, at this school and in our program,” UB coach Lance Leipold said. “We want to make sure we’re focused to do so.

“Definitely,” Lefebvre said. “We’ve been playing really good football lately, and it’s something that gives us a lot of momentum. It’s going to carry with us and hopefully we can roll with it down in the Bahamas.”

The tropical locale of the Bahamas – about 180 miles southeast of Miami off the South Florida coast – is a little different than the Gulf Coast of Alabama, where UB played last year in the Dollar General Bowl. The Bulls also have to tune out the distractions that come not just with playing in a bowl game, but playing in the only bowl game in an international locale. And winning the game.

“That’s got to be a mindset, and it’s something that, I’m sure, the coaches will talk about before we even go down there,” Lefebvre said. “There’s going to be a lot of distractions in bowl games, you see it every year. Maybe some players aren’t eligible for some reason, but that’s something we’ve got to block out completely and stay focused on the task at hand, which is getting that first bowl win.”

UB running back Jaret Patterson is taking a pragmatic approach to his second bowl game at UB.

“We need to treat it like any other game,” the sophomore said. “Preparation is going to be key, and we’re probably going to start preparing next week. But it’s about preparation.”

Patterson, who is fifth in the nation with 1.626 rushing yards and was named the Walter Camp FBS offensive player of the week on Sunday, already has a few ideas about how to prepare for a bowl game in a warm-weather locale.

“I got used to the cold, but in the warm weather, I’m probably going to have to drink more Gatorade so I don’t cramp, pickle juice and all that, but I’m looking forward to it,” said Patterson, who ran for 298 yards and a MAC single-game record six touchdowns Friday against Bowling Green.

Charlotte will play in its first bowl game in five seasons as an FBS program. The 49ers (7-5, 5-3 Conference USA) set school records for wins and conference wins in a season, and closed the regular season with a five-game winning streak. Charlotte moved to FBS in 2015 after resuming the program in 2013 and playing two years as an FCS independent.

"As proud as we are to be in this position after five consecutive wins, we aren't satisfied," 49ers coach Will Healy said in a statement. "We've been saying for weeks that our goal is to win a bowl game, not just to qualify for one. So we'll have to work hard in the coming weeks to prepare for an excellent Buffalo team. But we are so excited to have this challenge and an opportunity to share a bowl experience together."

A postseason trip to the Bahamas also will be lucrative for Leipold, who is in his fifth season as coach of the Bulls.

2019: Charlotte vs. UB in the Makers Wanted Bahamas Bowl