It’s not often that a house is built for a theater pipe organ, but that’s exactly what happened during the 1970s in Amherst, when Ralph Bacha and his partner designed their house to accommodate a Marr & Colton organ.

After decades of enjoyment, the death of his partner and an exhaustive search to find a new home for the unusual instrument, Bacha, 67, is ready to turn over two sets of keys.

A retired piano technician has purchased the organ – and he got the house along with it.

“I’ve seen many organs in houses, but it is fairly rare to find one that was specifically built to accommodate a theater pipe organ,” said new owner Gary L. Shipe. “I became afraid that the organ would be taken out of the house and the house would be sold as a regular house. If that organ was taken out of its home, it would not survive.”

The instruments – one of about 500 pipe organs built by Marr & Colton, a Warsaw-based company that went out of business in 1932 – entertained theater-goers at the Roosevelt on Broadway from 1927 until the theater closed in 1962.

Shipe, who worked more than 25 years in the University at Buffalo Music Department, kept track of the organ's whereabouts. He knew it had been in the Roosevelt and that it had been purchased by Bacha and his partner, an engineer at Occidental Chemical Corp. in Niagara Falls. Shipe has skilled hands, maintaining UB's inventory of 140 organs, pianos and harpsichords. He was known to “work magic” on the instruments, including the grand pipe organ at Slee Hall, according to one former student.

Shipe, 72, closed on the purchases Nov. 22. He said he was “excited and terrified” at the prospect of caring for the organ – which he knows will require a lot of “deferred maintenance.”

He has no regrets.

Selling the property, on the other hand, was no easy task for Bacha. First he had to clear his house of a lifetime of accumulated keyboard instruments, miniature trains and rare collectibles, most of which were inventoried within the last 18 months through an online auction.

Jerry Puma, a family friend and director of acquisitions at the Larkin Gallery, helped Bacha sell his extraordinary collections.

A box of pencils sold for $1,780, but these were special Eberhard Faber Blackwing 602 pencils.

“I have been selling quite a bit on eBay,” Puma said in March, adding: "Amazing what people will buy.”

With the slogan “half the pressure, twice the speed,” the Blackwing pencils were favored by Truman Capote, Stephen Sondheim and John Steinbeck, who called the Blackwing the best pencil he ever had. Three more sold for $610, Puma recalled.

Also found in the house – hidden in a bedroom closet in a four-drawer file cabinet that held tax returns from 1952 – were stainless steel tubes for a pair of 1958 Newmann U47 microphones that brought $30,000 during an online auction.

The microphones were used to make an album called “Shuffle Off to Buffalo,” recorded at the Roosevelt and starring the Marr & Colton pipe organ. A Berlant Concertone reel-to-reel tape recorder used in the making of the album was snapped up by an 80-something-year-old Canadian who drove down to pick it up, Puma said.

Many of Bacha’s larger instruments were sold through Cuttone Auction House in Livingston County. A 1926 Mason & Hamlin mahogany reproducing piano went for $11,800 and a 1980 Seeburg KT Special Nickelodeon rang up $8,260, Puma said.

Bacha said he could no longer afford to maintain the pipe organ, which has been a part of his life for decades. He had been looking to donate the organ so it could be appreciated by a public audience. But with the cost of disassembly ranging between $150,000 and $200,000, talks broke down with several institutions, including the Oechsner Castle in Williamsville, West Falls Center for the Arts and Niagara County Community College. 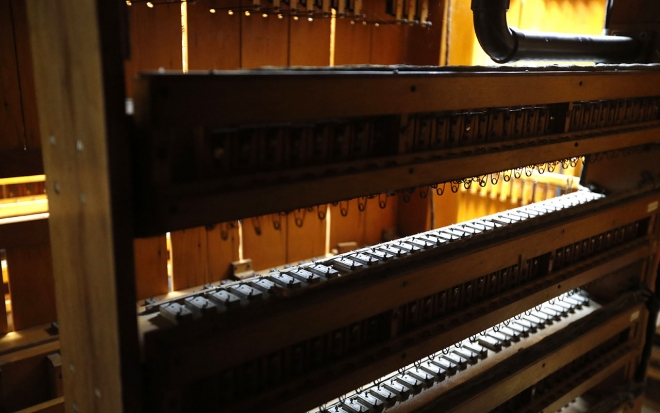 One of the three rooms in the basement that holds the components to the concert pipe organ at Ralph Bacha’s home in Amherst. (Mark Mulville/Buffalo News)

This summer, Bacha moved into a 102-year-old home in Hamlin Park and brought a few of his keyboard instruments with him – a grand piano and an ivory-and-gold electric Wurlitzer organ. An organist at Holy Angels Church on Porter Avenue, he thought that at least he'd have a keyboard to play after the church closes in July.

"It’s like I cut a ball and chain off my leg,” said a relieved Bacha, about the sale of the house and pipe organ. “I have my memories. I had my fun, and it’s time to move on. It all became too much for me.”

As Shipe contemplated spending the holidays in his new digs, he realizes the organ and house belong together.

“Neither is worth much separated,” Shipe said. “Nothing occupies as much space as a pipe organ disassembled. Who is going to want crates of parts and pieces?”

Tucked away in an Amherst home: One of the largest pipe organs in the state