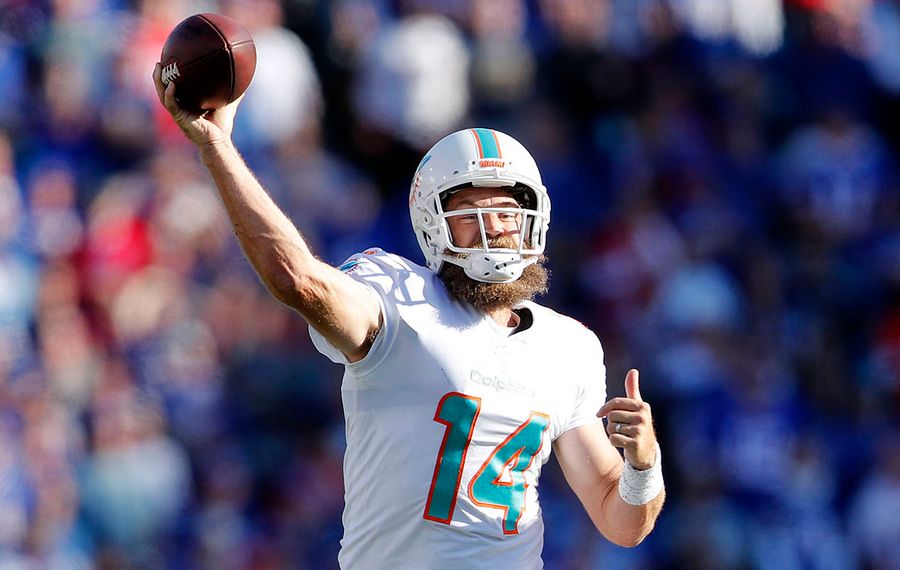 For all the exciting matchups, upset wins by Miami and Cincinnati and last-play field goal winners by Denver and Baltimore not much was really defined by Sunday’s Week 13 games in National Football League games.

Yes, the Philadelphia Eagles blew a splendid opportunity to tie Dallas for first in the NFC East by losing at Miami.

And the New York Jets were virtually eliminated from the AFC playoff picture by losing at Cincinnati. So were the under-achieving Los Angeles Chargers and Jacksonville Jaguars.

The eight-loss Jets, Jaguars, Chargers and Broncos can not catch the Buffalo Bills (9-3) for a wild-card berth in the AFC playoffs, assuming the Bills are not going to win the AFC East.

Cleveland (5-7) could tie the Bills by winning out and Buffalo losing its last four games. The Browns would have a tie-breaker advantage because of their head-to-head win over Buffalo.

Of logical contenders left for wild-card berths among AFC teams (Buffalo, Pittsburgh, Cleveland, Houston, Tennessee, Indianapolis and Oakland), there are only three head-to-head meetings among them. The Bills will play at Pittsburgh on Sunday night, Dec. 15; Tennessee will play at Oakland next Sunday, and Tennessee goes to Houston on Dec. 29.

Monday night’s Minnesota at Seattle game does have a bearing on two NFC races. The winner will move into a tie for first place in its division. The Vikings can tie Green Bay in the NFC North and the Seahawks can move into a share of the lead in the NFC West, thanks to San Francisco’s 20-17 loss at Baltimore.

A capsule review of Sunday’s games:

Game of the day

The scoop: The 49ers passed up what would have been a 53-yard field goal on a wet surface and went for it on fourth down, failed and turned the ball over to Baltimore in a tie game with 6:28 to play. The Ravens drove 34 yards in 12 plays and Justin Tucker kicked a 49-yard field goal on the final play to win it. It was the eighth win in a row for the Ravens. The Niners lost for the second time in their last four games after starting the season 8-0.

Why the Ravens won: In a game that could have gone either way, the running threat of Lamar Jackson (101 yards in 16 carries), kept the San Francisco defense off balance the whole game, including the winning drive.

The scoop: Deshaun Watson passed Houston to a 21-3 lead, then caught a touchdown pass from DeAndre Hopkins in the fourth quarter as the Texans scored a signature win that left them with a one-game lead over the Tennessee Titans in the AFC South Division and left New England just one game in front of the Buffalo Bills in the AFC East. Watson threw scoring passes to Kenny Stills, Duke Johnson and Darren Fells. Tom Brady passed for the three New England touchdowns, two to running back James White, but was sacked three times and intercepted once.

Why the Texans won: Leading 14-3, they stopped the Patriots on fourth down at the Houston 42 when Brady threw incomplete to Mohammed Sanu. Then they drove 58 yards for their third touchdown, putting New England in a deep hole, 21-3.

The scoop: Coming off their bye week, it took a while for the Chiefs to get into it, but they scored on three of their four second-half possessions. The last was for only one final play. Patrick Mahomes passed for just one touchdown and 175 yards but he ran for one of the Chiefs’ three rushing scores. LeSean McCoy had a 3-yard run for one touchdown, but had only 10 yards in five carries.

Why the Chiefs won: The Raiders turned the ball over three times and missed a field goal in the first half as they fell behind, 21-0. Oakland outgained K.C., but converted only 3 of 9 third downs.

The scoop: For the first time since they were throttled at home by the 49ers in Week Six, the Rams looked like the offensive powerhouse they are supposed to be. Todd Gurley ran for 95 of his team’s 132 yards on the ground and Jared Goff passed for 424 yards and two touchdowns. Ex-Buffalo Bills receiver Robert Woods had 13 receptions for 172 yards.

Why the Rams won: They dominated the Cardinals’ defense. They scored four times and had to punt only once in their first seven possessions. They had touchdown drives of 81, 82 and 92 yards.

The scoop: Aaron Rodgers passed for four touchdowns while Giants rookie Daniel Jones threw three interceptions on a snowy day at MetLife Stadium. It was the eighth straight loss for the Giants while Green Bay took a half-game lead over Minnesota in the NFC North pending the outcome of the Vikings’ game at Seattle on Monday night.

Why the Packers won: Leading by only four, they took advantage of New York’s failure to cover DaVante Adams in the end zone on a 17-yard scoring play despite having 12 men on the field. An interception and a defensive pass interference penalty led to the game-clinching score.

The scoop: the game was tied when Tye Smith returned a blocked field goal 63 yards for the go-ahead touchdown for Tennessee. Ryan Tannehill threw his second TD pass of the game to ice it. Dane Cruickshank came through the right side to smother Adam Vinatieri’s 46-yard field goal attempt, another chapter in a difficult season for the NFL’s oldest player. Earlier, Tennessee blocked a 53-yard attempt by Vinatieri, who made one of four tries.

Why the Titans won: The three missed field goals, two interceptions and a fumble were too much for the Colts to overcome as they fell two games behind first-place Houston and into third place behind Tennessee in the AFC South.

The scoop: Pittsburgh got revenge for the Myles Garrett attack on Steelers quarterback Mason Rudolph two weeks ago, ending the Browns’ win streak at three games and probably killing their slim playoff hopes.

The Steelers rallied from a 10-0 first-quarter deficit to win behind Devlin Hodges, Rudolph’s replacement. Hodges led a 69-yard drive after the second-half kickoff to the go-ahead touchdown, a 1-yard run by Benny Snell Jr. Hodges completed 14 of 21 passes for 212 yards, including a 30-yard scoring pass to James Washington.

Why the Steelers won: They limited the Browns to just a field goal in the second half as they recovered a fumble and ended Cleveland’s last possession with an interception.

The scoop: Carolina had a 14-0 lead before the game was 10 minutes old then was outscored 29-7 the rest of the way. Derrius Guice ran for two Redskins touchdowns.

Why the Redskins won: They stopped the Panthers at the 3-yard line, recovering a fumble with 14 seconds remaining. Carolina had recovered an onside kick after quarterback Kyle Allen had scrambled for 17 yards to score with 1:51 left.

The scoop: The heat on Jacksonville coach Doug Marrone is bound to get more intense after a fourth straight loss dropped the Jaguars to 4-8. Linebacker Devin White of the Bucs intercepted a pass to set up a score and returned a fumble for a touchdown.

Why the Buccaneeers won: With the help of two fumble recoveries, they built a 25-0 halftime leading, forcing Marrone to bench quarterback Nick Foles and put Gardner Minshew into the game.

The scoop: Injuries that have depleted their offense aside, the Eagles blew a chance to tie Dallas for the NFC East lead by losing to the lowly Dolphins. Miami took a 14-13 lead in the second quarter with a trick play that will be the talk of the NFL world all week. It resulted in holder Matt Haack, the punter, shoveling a pass to kicker Jason Sanders for a 1-yard touchdown play off a crazy field-goal formation.

Why the Dolphins won: They didn’t give up after the Eagles went in front 28-14. Ryan Fitzpatrick threw for touchdowns to DeVante Parker and Mike Gesicki and Patrick Laird ran for his first NFL touchdown. Fitzpatrick became the first player in NFL history to pass for a TD against an opponent (Philadelphia) with seven different teams.

The scoop: First-year head coach Zac Taylor got his first NFL win and the Bengals won after losing their first 11 games.
The Jets made history: They were the first NFL team to lose twice to teams that were 0-7 or worse entering the game. They also lost to 0-7 Miami on Nov. 3.

Why the Bengals won: Taylor came to his senses and put Andy Dalton back at quarterback in place of unprepared rookie Ryan Finley, giving Cincinnati its best chance of ending its losing streak. Dalton passed for 243 yards and a touchdown with no turnovers.

Dog of the day

The scoop: Denver once had a 17-3 lead, but needed a last-play field goal from 53 yards by Brendan McManus to win it. The Chargers had tied the game on a 46-yard field goal by Michael Badgley with 14 seconds left.

Why the Broncos won: Cornerback Casey Hayward of the Chargers was called for a 37-yard pass inteference penalty on the only play after the San Diego kickoff. That set up McManus’ game-winner.