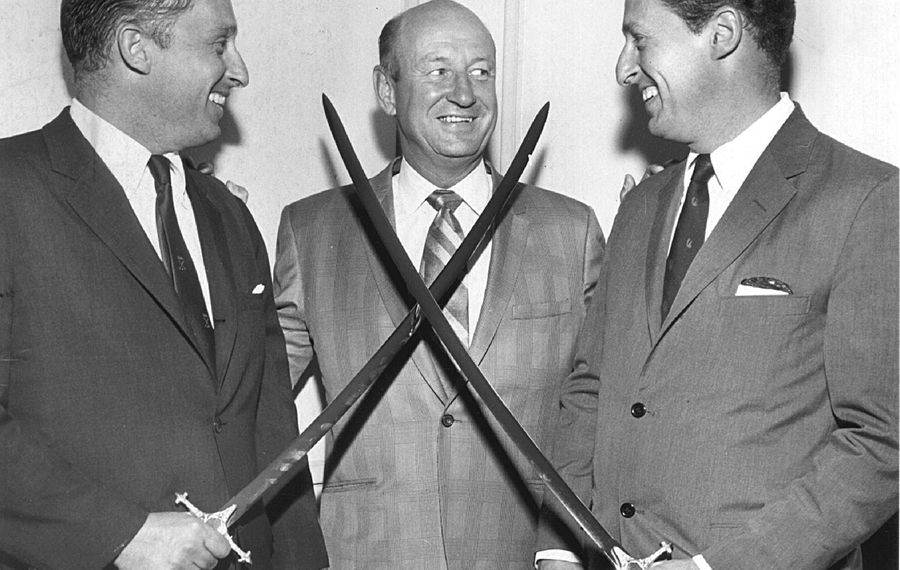 If you check the history books, it has a famous place in aviation history as the date of the first Boeing 747 jumbo jet preview, with 191 passengers — mostly media — on a flight from Seattle to New York City.

In Buffalo, the date has a much more significant meaning. Monday will mark the 50th anniversary of the date the National Hockey League awarded an expansion franchise to Seymour H. Knox III and his brother, Northrup R. Knox, to be operated in Western New York.

On Dec. 2, 2019, the Sabres will play the New Jersey Devils in KeyBank Center and will celebrate "Founders Night" in tribute to the birth of the franchise.

Family members of both Knox brothers will be on the ice for a pregame ceremony and video presentation. Family members of the original board of directors also will be recognized throughout the night.

There will be a pregame happy hour in the Labatt Blue Zone bar with $5 beer specials, food sampling from corporate partners and live music.

The main pavilion will have a birthday theme. Fans will have the opportunity to take a photo with a Sabres-themed 50th birthday cake and sign a giant birthday card for the team on the 100-level concourse.

It was a multi-year process for the Knox brothers to get an NHL team. Buffalo, remember, was passed over in the 1967 expansion that doubled the NHL from six to 12 teams and created a Western Division of Philadelphia, Pittsburgh, St. Louis, Los Angeles, Minnesota and Oakland.

With attendance lagging in Oakland, the Knox brothers intended to purchase the Seals early in 1969 and planned to move them to Buffalo, but the NHL blocked the move. CBS, which carried NHL games at the time, wanted the lucrative Bay Area television market to remain in the league. And the league was planning more expansion.

The Knoxes eventually landed 20 percent of the Seals as a way to get deeper embedded in the hockey world and push support for an expansion franchise in Buffalo. They paid $6 million to join the Vancouver Canucks as new franchises for the 1970-71 season and were officially branded as the "Sabres" on May 22, 1970.

Neither Buffalo nor Vancouver has won a Stanley Cup in their 50 years, but both teams have come close. The Canucks have been to the Cup final three times, first losing in a sweep to the New York Islanders in 1982 and then dropping a pair of Game 7s, at the New York Rangers in 1994, and at home to Boston in 2011. The Sabres' two trips ended in Game 6 losses to Philadelphia in 1975 and Dallas in 1999.

Today, both teams are in rebuilding mode. The Sabres are in the NHL's longest playoff drought, dating to 2011, while the Canucks have missed the posteason for the last four years and have not won a series since their '11 run to within one game of hockey's ultimate prize. They will meet Saturday afternoon in Vancouver's Rogers Arena during Buffalo's three-game Western road trip.

Injured Hughes out for Devils

As for Monday's game, the Sabres will meet a New Jersey team that it battered, 7-2, in the home opener on Oct. 5. The Devils are last in the Metropolitan Division at 9-12-4 and will be without No. 1 overall pick Jack Hughes, who sat out Saturday's 4-0 loss to the Rangers with a lower-body injury.

Hughes was injured when he blocked a shot in Thursday’s win in Montreal and sat out practice Friday. He's officially listed as day to day. The 18-year-old has four goals, seven assists and a minus-8 rating in 24 games of his rookie season.

The Sabres closed a difficult November by getting points in four of their last five games. The 2-1-2 stretch ended with Saturday's 2-1 overtime loss in Toronto. It was the fourth straight game stretching past 60 minutes that the Sabres have lost, three on deciding goals and one in a shootout.

Fan voting is open for NHL All-Star Weekend. For the fifth straight year, fans will determine the four captains for the division teams that will participate in the 3-on-3 tournament Jan. 26 in St. Louis.

Fans can cast votes online at NHL.com/Vote and via the NHL app for one player from each division, without regard to position. Voting concludes at 11:59 p.m. ET on Dec. 20, with the top vote-getters by division named captains.

Fans are permitted to select as few as one player and a maximum of four players per ballot. The maximum number of ballots cast per 24-hour period for each fan is 10.