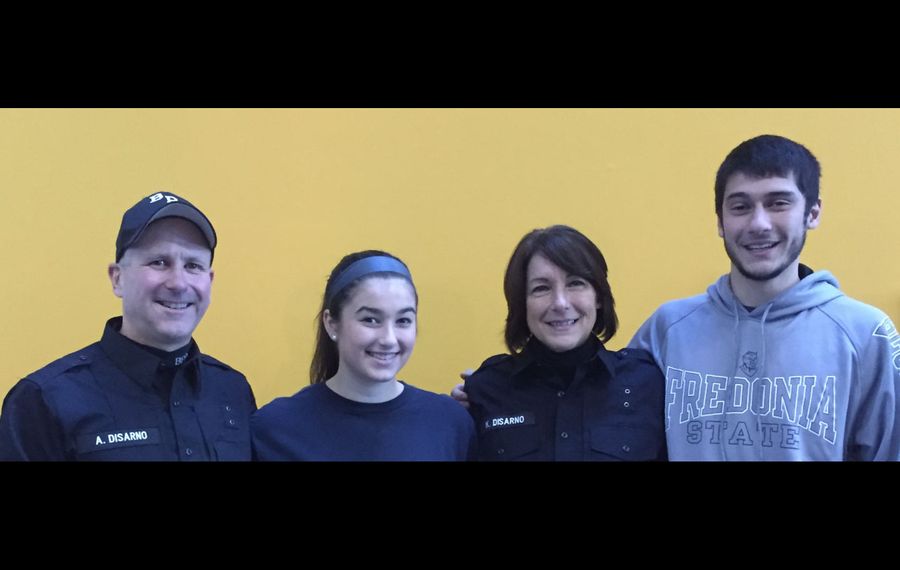 Buffalo Police Officer Tony DiSarno was responding to a fight call in the Ferry-Fillmore District at around noon June 28 when he pulled up to the scene and got out of the patrol car. A rookie cop on his first day on the job was with him.

Then DiSarno did something strange – he got right back in the cruiser, closed the door, locked it and began staring off while rubbing his legs.

"He's not the type to sit in a car during a call," said DiSarno's wife, Kathy, who is also a Buffalo police officer.

It quickly became apparent that something was very wrong. Once fellow officers were able to get the door open, DiSarno got out and collapsed. His officers threw him into the back of a patrol car and drove him to the hospital.

"It was a stroke," Kathy DiSarno said. "A brain bleed. A pretty significant one."

Tony DiSarno spent two weeks in intensive care and another few weeks in a regular hospital room, and he is now in a long-term care facility.

In the meantime, the city denied Tony DiSarno's claim that his stroke was an on-duty injury.

"They said it wasn't police work that caused it. That it's just a natural occurrence," said John Evans, president of the Buffalo Police Benevolent Association.

The police union took the case to arbitration and is now awaiting a decision.

Had DiSarno died of the stroke, Evans argued, "it would have been a line of duty death," entitling his survivors to those benefits.

Under the current situation, DiSarno is covered for 50 days of long-term care per year. "After that, you're on your own," Evans said. Long-term care costs about $13,000 a month, Evans and Kathy DiSarno said.

Tony DiSarno, 54, a former Buffalo Municipal Housing Authority police officer who has spent the last 11 years as a patrol officer with the Buffalo Police Department, is improving, but he has lost mobility on his right side and he has trouble speaking. He requires 24-7 care and it's not clear when he'll be able to come home, his wife said.

Kathy DiSarno is planning on retiring soon, at which time she could switch insurance plans. That would cover 80% of the nursing care costs. But it will still be a big financial burden on the family, she said. "I don't know how anybody can afford that," she said.

Friends are planning a benefit to help out. The fundraiser is scheduled for 2 to 6 p.m. Dec. 7 at Doc Sullivan's, 474 Abbott Road. A $25 donation includes an open bar, food, entertainment and raffles.

"These guys have been wonderful," Kathy DiSarno said.

She has little confidence that the ruling about her husband's coverage will be overturned, but she at least hopes that in the future other officers won't face what her family has. Other police agencies across the country do cover heart attacks and strokes on duty as on-duty injuries, she said.

Dealing with all the doctors and insurance has been overwhelming, she said. The DiSarnos hadn't established each other as health care proxies or set up power of attorney, which meant lots of extra headaches and paperwork, she said. She urged everyone to take those steps, before it's too late.

"You never expect to get a call like that," Kathy DiSarno said.