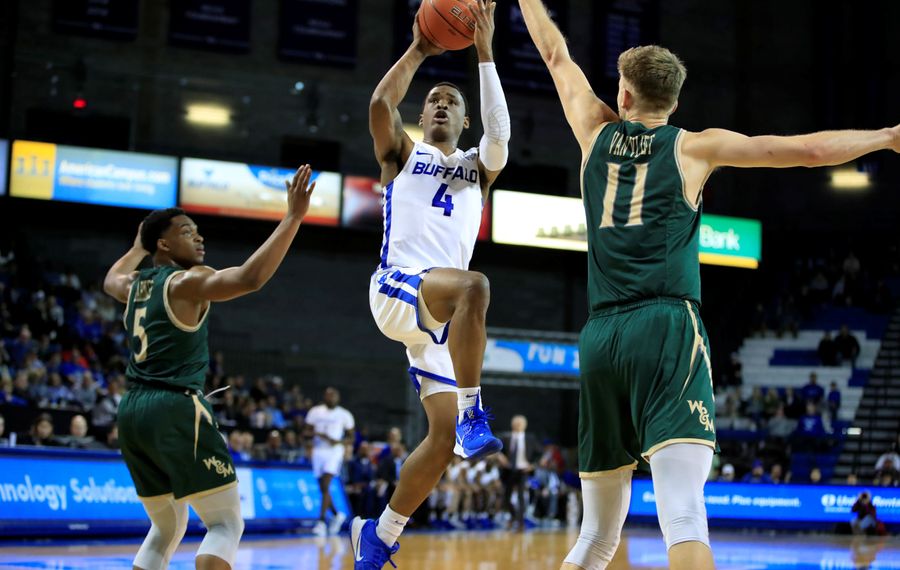 The University at Buffalo men’s basketball team relished the comforts of home.

Just as important, the Bulls relished their depth off the bench in an 88-77 win against William & Mary on Saturday before 3,420 at Alumni Arena.

Jayvon Graves scored 24 points for the Bulls, who hosted their first home game since Nov. 11, and was one of four players to score in double figures. Davonta Jordan scored 18 points and had seven steals, Antwain Johnson scored 11 and Josh Mballa added 10 and had a team-high eight rebounds.

But the triggers for the Bulls came off the bench, starting with Gabe Grant. Grant scored nine points – all on 3-pointers – and accounted for more than half of UB’s points off the bench.

“That’s one thing I was mentally preparing myself for, today,” Grant said. “I haven’t done the best with it and lately, I’m trying to understand what it means, to come off the bench and bring that spark. Today, I see that my process worked. And I’ve been building confidence for the last couple days, just talking to myself and motivating myself and believing in myself. It doesn’t happen the day of the game. You’ve got to give yourself confidence hours and days before.”

Grant scored 12 points off the bench in UB’s 109-72 rout of Division III Nazareth on Nov. 11 at Alumni Arena, but entered Saturday averaging only 3.2 points and 2.8 rebounds a game. He scored points in three of UB’s first six games, but admitted the adjustment to being a reserve hasn’t been easy, even after sitting out last season as a transfer from Houston, where he averaged 5.3 minutes a game in 24 games in 2017-18.

But it hasn’t gone unnoticed by Graves, who scored in double-digits for the seventh consecutive game this season.

“It really shows they’re ready to get in and make a big impact,” said Graves, who entered the weekend as UB’s leading scorer, averaging 16.7 points per game. “There’s starters at other programs, but they’re like starters for us, also.”

That depth, UB coach Jim Whitesell explained, is key for a team, particularly early in the season when some teams are still trying to find their identity beyond their five starters. The Bulls have Rolando Segu, who played in 36 games last year and averaged 10 points in UB’s first six games this season.

Whitesell likened LaQuill Hardnett to a relief pitcher. Primarily substituting for Mballa, Hardnett played 17 minutes against William & Mary and had four rebounds and three steals before he fouled out with 2:08 left.

“We need to get those guys more playing time (off the bench) to keep these guys fresher,” Whitesell said. “We came back from Charleston and Jayvon was averaging 35 minutes a game (in three tournament games). Not that he can’t play 35, but that’s a lot of minutes in three games in four days. We just said, ‘let’s look at our team, in terms of practice.’ David Nickelberry gave us good play. Gabe really shot the ball really well.”

But, Whitesell added, “we need that group to grow. No doubt.”

“Every game is different, so it’s about trying to understand that you can come in there and provide a spark,” Grant said. “It’s something that we take pride in. Every man is different. Every man has something to prove. To come in with that energy and to give the guys a spark, that’s huge, especially with our team, because we’re so deep.”