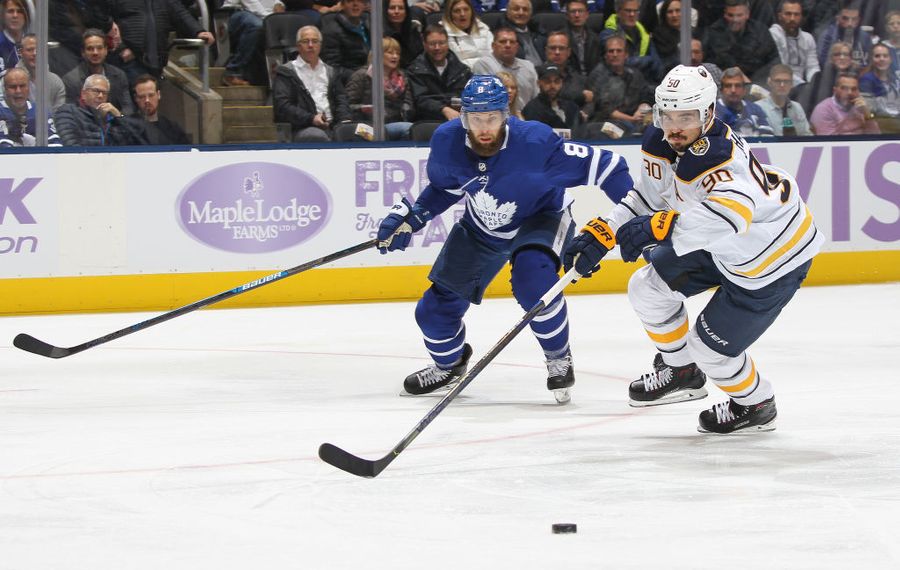 TORONTO – The rivalry is alive and well.

After enduring five consecutive losses to their foes up the Queen Elizabeth Way, the Buffalo Sabres split their home-and-home against the Toronto Maple Leafs with a 2-1 overtime defeat Saturday night in Scotiabank Arena.

Rasmus Ristolainen scored for the Sabres and Carter Hutton had 41 saves in goal. William Nylander broke a scoreless tie with his 10th goal of the season in the second period, and John Tavares scored the game-winner 1:45 into overtime.

Fine first: The Sabres were outshot, 11-8, in the first period but mostly outplayed the Leafs. Following a Toronto turnover, Jimmy Vesey retrieved the puck in the offensive zone and floated a cross-ice pass to Marcus Johansson, whose shot from atop the crease was stopped by goalie Frederik Andersen.

Sam Reinhart also hit the post and Jake McCabe fired a one-timer from the left-wing circle that was turned away by Andersen.

Help wanted: The Sabres played well defensively in the first period, as illustrated by Eichel's back check to knock Zach Hyman off the puck. Buffalo cleaned up every rebound in front of the net and avoided any breakdowns in the defensive zone.

Moments after losing his stick, Henri Jokiharju dove across the slot to prevent the Leafs from making a centering pass. The Sabres have a negative-12 goal differential in the first period of games this season.

Opening salvo: The Leafs broke the scoreless tie with 14:30 remaining in the second period when Nylander cut across the slot and lifted the puck over Hutton's shoulder. The Sabres entered Saturday 2-7-2 when their opponent scored first, and they had killed each of their previous six penalties after allowing a power-play goal in nine consecutive games.

Momentum swing: The Sabres seemed to gain momentum after Hutton's save on Kasperi Kapanen midway through the second period. Moments later, Jeff Skinner protected the puck from Tyson Barrie along the boards and found Conor Sheary in front with a backdoor pass.

Andersen used his glove to stop Sheary's one-timer shot. The play was reviewed to see if the puck crossed the goal line while in Andersen's glove, however, the call on the ice stood.

Late flurry: The Sabres had a flurry of chances in the latter portion of the second period, despite having a disastrous second power play. Skinner retrieved his own rebound and had enough time to shoot a backhander from the crease, only to be stopped by Andersen, who dropped his stick moments earlier.

Additionally, Victor Olofsson hit the crossbar with under a minute remaining in the second period. The Sabres were outshot, 16-11, in the second and entered Saturday 0-10-1 when trailing after two periods this season.

Toronto, meanwhile, entered the game 8-0-2 when leading after two periods.

Drive to the net: Ristolainen tied the score, 1-1, with 13:02 remaining in regulation when he skated through the right-wing circle, skated toward the net and lifted the puck over Andersen's shoulder.

The goal was Ristolainen's second of the season and the first of his career against Toronto.

All-Star: Voting started Saturday for the NHL All-Star Game, which will be held in St. Louis on Jan. 26. Eichel, Skinner and Dahlin are candidates on the All-Star ballot to captain the Atlantic Division in the 3-on-3 event.

Next: The Sabres are scheduled to not practice Sunday and will host the New Jersey Devils on Monday night in KeyBank Center. A lower-body injury kept rookie center Jack Hughes out of the Devils' lineup Saturday against the New York Rangers.

It was a terrible November but Sabres' season wasn't rendered moot