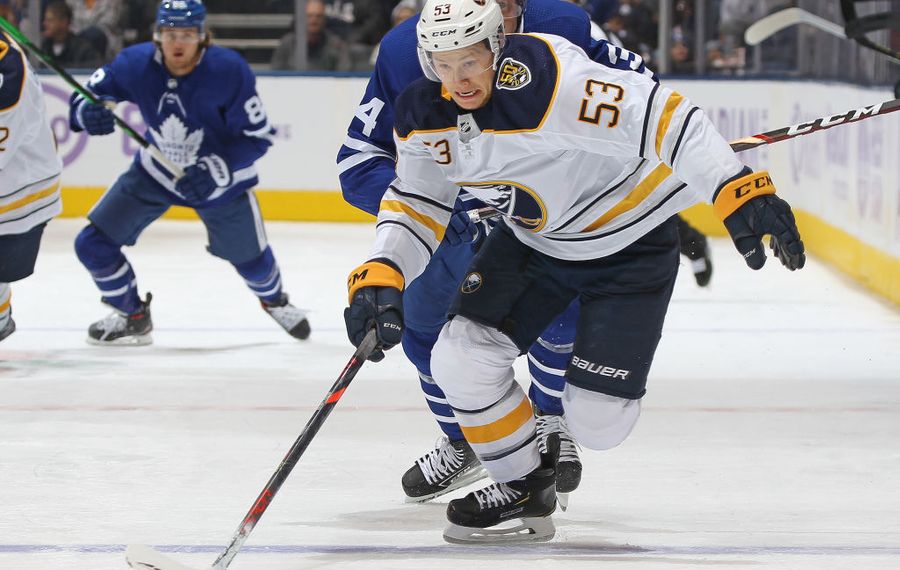 TORONTO — Good riddance to November. Let's get Santa in here and see if the Sabres' fortunes get any better.

When they suffered a shootout loss Oct. 28 to Arizona in the final game of the month, the Sabres were 9-2-2 and first overall in the NHL standings. At the close of business on Halloween, their 20 points left them tied with Boston and one point behind Washington for the top spot.

The calendar flipped and so did the Sabres' fortunes.

Saturday's 2-1 overtime loss to the Toronto Maple Leafs left Buffalo at 3-8-3 for the month. That's just one point ahead of hapless Detroit for the fewest number of November points in the league with nine.

Frankly, the Sabres are a hard club to gauge right now. It feels in some ways like they're miles out of the playoff hunt already but everyone feeling that way needs to look at the standings.

You have to wipe your eyes a couple times when you do it. The Sabres are one point out of a playoff spot. One. It was the difference in Saturday's result, as they fell a point behind the Leafs.

They have one more point than Montreal. Two more points than Tampa Bay, which really makes that 0-3 mark against the Lightning tougher to swallow.

The Sabres finished the month 2-1-2. And those five games came after a regulation loss in Boston where they dominated the defending Eastern Conference champions most of the night, only to see Tuukka Rask go all Dominik Hasek on them and steal a game.

That's a pretty good response from a 1-7-1 disaster over the month's first nine games.

The Sabres have played 11 forwards and seven defensemen for several games in this stretch. Part of it is all their injuries up front. Another part is the need to get their overly stacked defense corps into games.

"If I look at this stretch since Boston, the last six games we're really, really pleased with the way the team is settling into a pretty consistent game here that gives us a chance every night," Krueger said. "We've been involved in excellent games against some of the strongest teams in the National Hockey League. It's about having the mental strength now to take that into every game we play and just continuing to build forward. We feel to be in a good place."

Krueger came in here at training camp and you had players fawning all over him like he was some psychological truth whisperer. When they started 8-1-1, you wondered if it was real. Lots of underlying numbers were encouraging.

The fool's gold last year was all the overtime and shootout wins. Seven of the 10 victories in the November winning streak came after either 60 or 65 minutes. This year, the issue driving things out of whack is special teams.

The penalty kill was also in the bottom five of the league in November. Perhaps assistant coach Don Granato can help in these areas now that he's back in the fold after his near-death bout with pneumonia and a blood disorder. Krueger talked about having a fresh set of eyes and, from this view, it's what the Sabres need.

Put just about anybody on the power play at this point. Even guys you might not expect. How could they be any worse?

The height of the Sabres' frustration came late in the second period when Conor Sheary had a golden opportunity on a 2-on-1 break off a Jeff Skinner feed. But Leafs goalie Frederik Andersen speared the puck in his glove. The fans erupted until they suddenly noticed a replay review taking place.

After a couple minutes, the play was ruled no goal and the NHL sent out its cursory explanation that said there was no conclusive way to tell if the puck was over the goal line. Memo to the NHL: In 2019, it's long past time to have puck sensors for plays like this.

Social media was outraged at the result of the review. Of course, given the state of social media, what else is new? But while it certainly looked like the puck in Andersen's glove was over the line, there was no way to definitively see it, which is the standard you have to use.

That said, how about burying a chance instead of firing a puck into a guy's glove?

Want another November nugget? Here's one: Sheary had no goals. In fact, since getting two on opening night in Pittsburgh, he's had just one other one and that came Oct. 17 in Los Angeles. He's not the only player bathed in a huge drought.

Goalie Carter Hutton went 0-5-3 in November and was terrible at times in clearly losing the No. 1 job to Linus Ullmark. But he was on his game Saturday. Hutton made 41 saves on a back-to-back in a tough visiting barn. Still, John Tavares' overtime winner simply can't be flubbed with the glove.

The Sabres did not make Hutton available postgame, which is exceptionally out of character for them. After all the rough games he's had this month, to make 41 saves and still lose had to be crushing.

Hutton and the entire team can take solace that this season isn't dead. Far from it. December will be tough, including next week's trip to Western Canada, two games against Boston, another trip back here to Toronto and rugged home games against St. Louis, Nashville and Tampa Bay.

But the Sabres are still alive. Even after what had the look of a season-killing month. The last 10 days changed the needle on the narrative.

"We started the season well, had the dive there and now we're getting our game back," said Rasmus Ristolainen, who scored Saturday's only goal. "We just have to keep going and keep working harder."