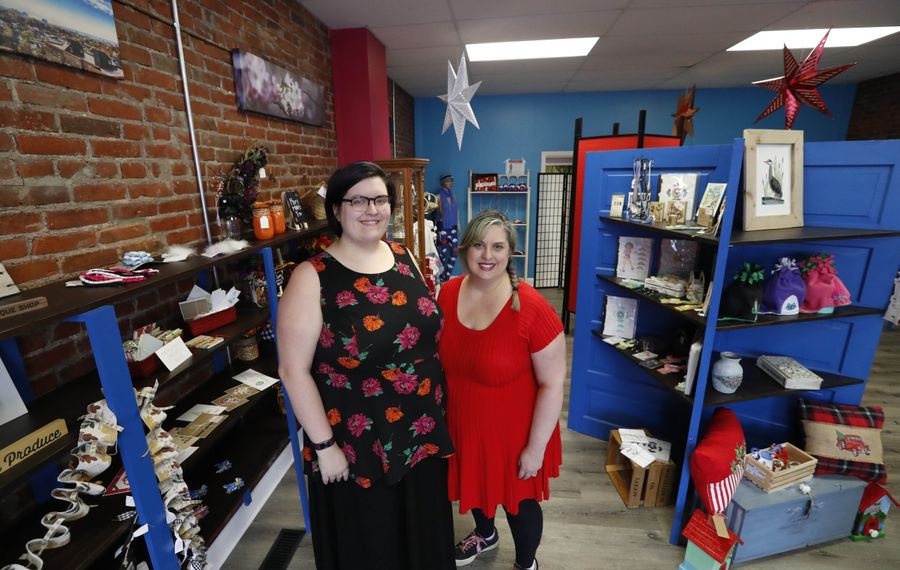 Talia Kalisiak has always had an entrepreneurial spirit. When she was 5, she had a lemonade stand and made $40 in one day – in the rain.

Now, at just 19, she's the owner of Handmade WNY, a boutique at 78 Webster St. in North Tonawanda that sells products from local artisans such as jewelry, clothing and home decor. It opened Nov. 1.

She and her mom, Heather, who owns Martinsville Soapworks just five doors down, call Handmade WNY a two-year experiment. With Heather's help, Talia will learn and do everything it takes to be an independent business owner. If she is successful and still loves retail life when the two-year store lease is up, she'll continue. If she doesn't, she'll sell the shop or close it.

"Either way, it's cheaper than college," Heather Kalisiak said. "And it's going to look better on a résumé than anything."

The two businesses in North Tonawanda are among the dozens locally and thousands nationally taking part in Small Business Saturday, a holiday shopping event that highlights exactly what you would expect from the name: small businesses.

In the case of the Kalisiaks, the day is also about a pair of family businesses. Heather Kalisiak said her daughter's involvement in Handmade WNY has also served as a creative way around the traditional classroom setting that Talia, who has special needs, finds challenging.

At age 2, Talia was diagnosed with apraxia, a neurological disorder that can make speaking and reading difficult. She learned strategies in speech therapy to get the words out, and gets lots of practice working through her apraxia when dealing with the public. But she can still get tripped up when it comes to explaining to potential vendors the multipage legal contracts they will need to sign to do business with the store.

"That's when she picks up her phone and I get a text, 'Mom, come down,' " Heather said. "But she just opened the store. That's something she'll be able to do by herself six months from now."

Talia was home-schooled her whole life. Naturally, there were many lessons to be learned by way of her mom's business making and selling soap.

Talia learned how to mix ingredients, which she enjoyed since it was "like squishing slime," she said. She began accompanying her mom to craft shows at age 5 and learned things like how to set up a display, how to interact with customers and how to make change. She earned 5 cents for every price sticker she put on a product, and made sure she finished 120 of them in a batch so she could buy a $6 stuffed Pokemon toy.

"I approached everything as a learning experience, so it was always just very organic," Heather said. 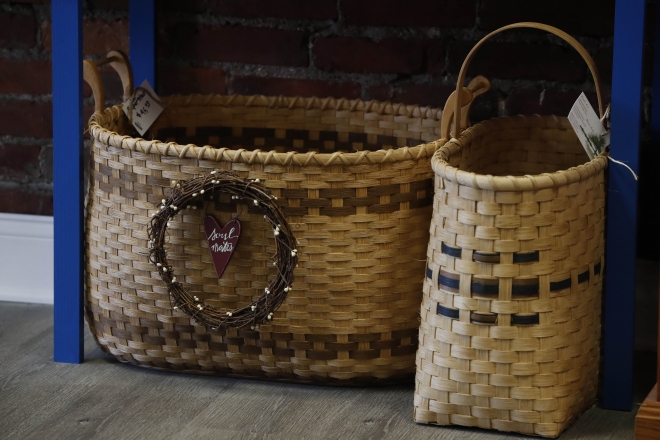 Handmade WNY features artisan items including these baskets by Maureen Quale who is a member of the Roycroft Association. (Sharon Cantillon/Buffalo News)

Both mother and daughter believe Talia will learn as much or more owning Handmade WNY as she would in college. She'll have to market, merchandise and sell. She'll have to serve customers and manage vendors, understand sales tax and insurance, and be sure she's abiding by all state, local and federal laws.

Those skills will translate well in the real world, they said.

In Heather's book, diving into an experience like Handmade WNY is more practical than trying to choose a major and racking up tens of thousands of dollars in debt while still a teenager.

Heather has a degree in pre-17th century British and English literature. She also owned a cloth diaper business before starting Martinsville Soapworks in 2002.

Talia's ideas for the future are similarly foggy. When asked where she sees herself in 10 years, she says "I want to have pet snakes."

As for careers? Your guess is as good as hers.

But for now, she's all in on Handmade WNY. She enjoys the art of merchandising and display, which shows in the store's earthy orange fall window display. And though she doesn't pressure a sale, she is a natural salesperson, getting a feel for who the customer is and showing them a product that's suited to them.

Heather is active in North Tonawanda's downtown merchant association, and had been pushing for more retail to balance out Webster Street's bars and restaurants. She also wanted to give young artists a permanent place to show their work instead of schlepping their things from one craft show to another. She features artisans at Martinsville Soapworks and wanted to do more, but had no room to expand.

When the lease at 78 Webster St. opened up in September, she thought it would be the perfect place to try such a venture. But there was no way she could handle a second business.

That's when Talia threw her hat in the ring.

Heather never wanted her business to become a family business, and didn't create it with the idea of passing it down.

"I've seen how it creates resentment in children and I didn't want that," she said.

So when Talia said she wanted to start her own, separate business a stone's throw away, momma was proud.