Bill Myka enjoys polka dancing, chopping wood and tinkering around the house, but at 85, he wishes his balance was a bit better.

Myka – who served from 1957 to 1959 in the U.S. Army 82nd Airborne Infantry Division – is among a small number of veterans who are starting to show what just a few minutes of intense exercise three times a week can do for someone who is older.

He recently completed a pilot study at the Buffalo Veterans Administration Medical Center that tests pulmonary, cardiovascular and grip strength – all indicators of frailty.

Myka saw improvement in all three.

“It doesn’t take much,” said Kenneth Seldeen, research assistant professor specializing in cellular biology and geriatric medicine in the University at Buffalo Jacobs School of Medicine and Biomedical Sciences.

Seldeen, also part of the UB Center for Successful Aging, is the co-investigator managing the two-year study, fueled with a $200,000 VA Office of Research and Development grant.

The seed money is small in government-supported research circles but could lead to expanded studies involving other VA health centers if findings continue to show promise that could one day have broad implications for older adults.

“The studies that occur at the VA are not just for veterans,” said Dr. Bruce Troen, director of the Center of the Successful Aging, a geriatrician at the VA and study principal investigator. “They have had ramifications that have really gone throughout our entire country.”

Add a BURST of fitness to your holiday regimen

Seldeen and his team are in the first year of the study. They have put 20 veterans through the paces and look to involve 15 more before publishing findings next year.

It’s part of a larger effort by researchers tied to UB and the VA who seek to find ways to help people enjoy healthier, more functional lives as they grow older.

It isn’t easy. Fewer than 10% of those age 75 and over meet the recommended weekly exercise regimen of 30 minutes a day, five times a week, Seldeen said.

“We're looking for exercise that will be more exciting,” he said, “and when you look at high-intensity interval training, there are published studies that show even a single minute a few days a week can have benefits.” 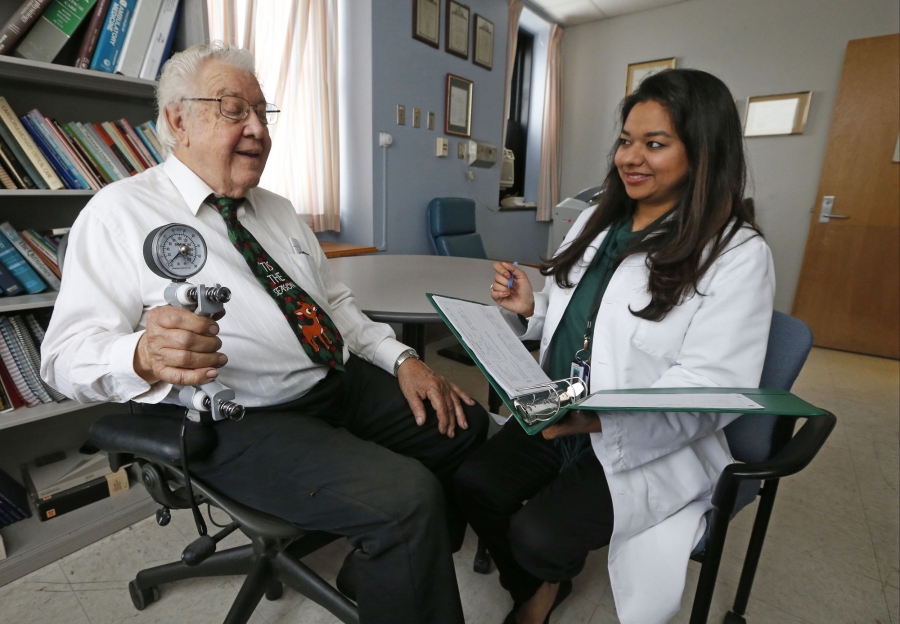 The latest research looks to determine whether that holds true for older adults – and if HIIT benefits will encourage study participants to continue a regular exercise routine after they complete their three-month pilot study regimen.

Researchers look to track veterans aged 60 to 85 with good cognition and in stable health – though future studies could examine how high-intensity fitness impacts those with memory issues or more serious health conditions.

“We could also look at strategies to make HIIT easier if we coupled it with vitamin D, or some other nutritional component or exercise,” Seldeen said.

The current study started in a research lab with 2-year-old mice – the human equivalent of age 65 – who were run through a HIIT program on a small treadmill. After four months, they ran farther over the same length of time, improved strength and breathing capacity, and were more robust.

Veteran participants start by answering health and wellness questions, then have their grip strength and cognition tested. Gait speed and maximum oxygen consumption are measured during a six-minute walk on a treadmill at the VA.

“All of these are related very highly to functional capacity in the community,” Troen said.

After 65 years, she learns she exists because Kenmore man rescued her dad Sat, Feb 1, 2020

Only if you press Ted Yochum will he describe how he swam toward a weakened man in deep water, a guy who had been clinging to an empty can of gasoline for at least 45 minutes.

WWII nurse, now 98 and living in Williamsville, awarded France's Legion of Honor Mon, Dec 23, 2019
Purple Heart recipient, 96, to be honored: 'I get around in pretty good shape' Thu, Nov 14, 2019
Vietnam War didn't end for Perrysburg soldier after he was shot Mon, Nov 11, 2019
In Dunkirk, a farewell to one Korean War soldier, an ongoing vigil for another Sat, Oct 19, 2019
'Miraculous closure': Eulogy for Korean War soldier whose remains were returned after 69 years Sat, Oct 19, 2019
WNY veterans cemetery to encounter yet another delay Wed, Oct 9, 2019
After almost 70 years, a soldier is coming home from Korea Mon, Oct 7, 2019

Veterans continue to go through the same battery tests during each visit, with an eye on how baseline results change.

Veterans are tracked for 10 minutes while riding a recumbent bike three times a week. They start by pedaling for 3 minutes at 50% of maximum oxygen volume, followed by 1 minute at 80% and 1 minute back at 50% three times in a row, with another minutelong push at 80% at the end.

This involves a total of 4 minutes of high-intensity exercise.

“I think they tried to kill me sometimes, but I felt invigorated,” cracked the 85-year-old Myka, of Akron. “I complained a little bit but body-wise I felt awoke, wanting to do a little more exercise.”

He wasn’t alone. Richard Minor and Bill Pichcuskie also were glad they participated.

Minor, 66, who lives in the Fruit Belt neighborhood, served in the Marine Corps from 1972 to 1974. The retired General Motors fork truck driver – who was not “an exercise-type person” – has Type 2 diabetes and is a prostate cancer survivor. He no longer gets winded carrying groceries or walking up the stairs to his second-floor flat, has started getting out of his chair while watching TV to do squats, and wants to start fitness training in the VA gym.

Pichcuskie, 62, of Niagara Falls, is a former Marine Corps navigator who spent 20 years in active duty and the Reserves. He has Type 2 diabetes, a stent in a coronary artery, hypertension and rheumatoid arthritis. Nonetheless, he rides his bike and cross-country skis regularly with his wife, Nancy, who works at the VA and told him about the study.

“I did it to see what I could do,” Pichcuskie said. “I was challenging myself and really working as hard as I could. I felt great.”

He boosted his oxygen capacity and improved a cardiovascular system he learned at the start of the study was already in good shape, despite his weight and health challenges.

“People like to exercise at a very low level because it's safe for them,” Seldeen said, “but sometimes you’ve got to push a little bit harder to get more benefits.” 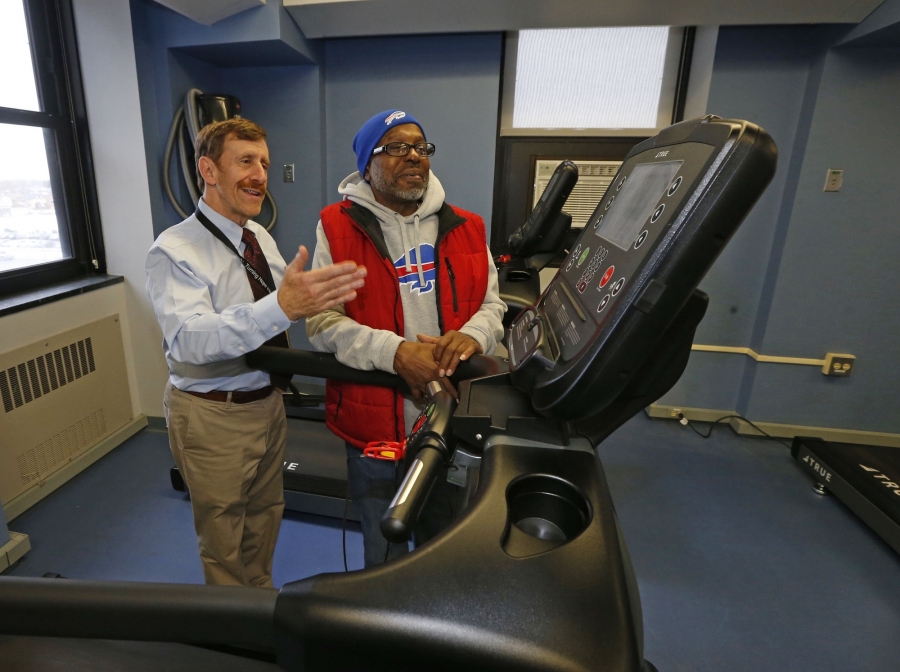 The HIIT study is but one of a variety of research studies at the Buffalo VA. Sleep, cardiovascular, mental health and chronic pain are among other areas of inquiry, said Dr. Jeff Mador, associate professor in the UB Medical School and study co-investigator who focuses on pulmonary, critical care and sleep medicine at the hospital.

It’s part of a larger effort that helps show how veterans across the U.S. continue to serve their country. The Million Veteran Program alone has included more than 775,000 veterans since it launched eight years ago and features the largest genetic database in the world.

“There's not only research, there's also training going on for clinicians” who become doctors and other health care providers, said Troen, also chief of the Division of Geriatrics and Palliative Medicine in the UB Medical School.

The Center for Successful Aging, meanwhile, collaborates with colleagues in the UB School of Public Health using data collected locally and elsewhere as part of the national Women's Health Initiative; is working with school biomedical engineering researchers to better understand how aging impacts stem cells in muscles; and how deprescribing some medications can improve wellbeing.

Myka was glad to help as part of the overall effort. He’s thinking about joining a senior center and taking SilverSneakers, yoga or tai chi group fitness classes. He continues to count his blessings that he’s rarely sick and has only had to weather one surgery, to remove his appendix, many years ago.

The secret to his longevity?

He keeps moving – and thinking.

Growing old and healthy in WNY just got a little easier, thanks to a UB grant