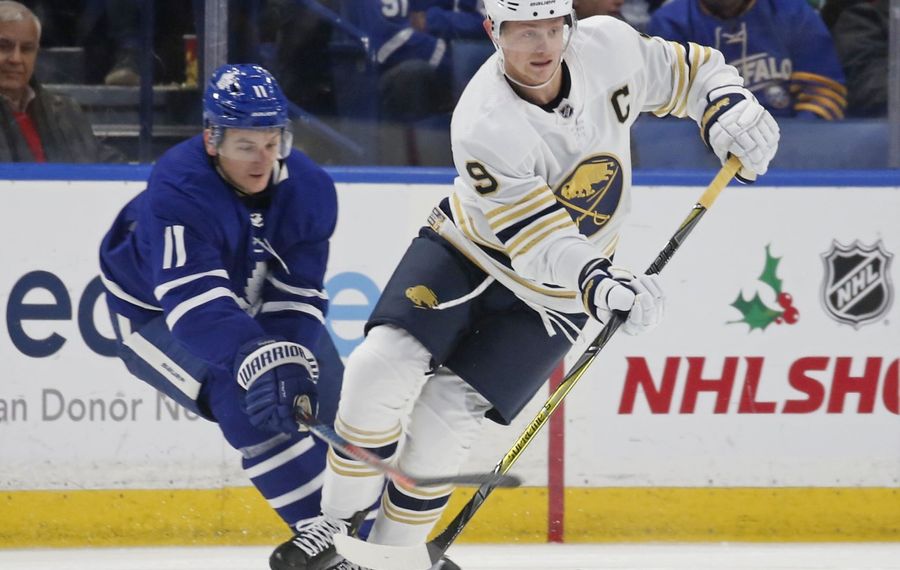 When the topic of the Toronto Maple Leafs was brought up to him on Thursday afternoon, Jack Eichel looked and sounded like someone told him he was getting pork loin and broccoli for Thanksgiving dinner.

Eichel stuck with the standard cliches. Get back on track. Big two points. Always important against a divisional opponent. Blah-blah-blah. Eichel knew exactly what he was doing. He wasn't going to make any headlines or drive any news cycles, particularly because the media crowd around his locker included several print and TV types from Toronto.

Eichel was completely full of it. I wanted to talk Leafs, Leaf hate, an ugly losing streak against them, and he wasn't buying what I was selling. We both knew the deal. As the captain, he was expertly playing the game behind the game.

Then came the real game late Friday afternoon. And Eichel beat the stuffing out of the Leafs.

He played 21 minutes, 36 seconds and posted his sixth game this season of at least three points. Two goals and a highlight-reel assist on Victor Olofsson's second-period rocket. A plus-4 rating. Eight shots on goal. And a 15-7 dominance in the faceoff circle.

The Sabres were in serious trouble early in the second period in a 2-0 hole. Then they scored four goals — what feels like a week's worth for this group — in a span of just over 13 minutes. Eichel got the empty-netter with 27 seconds left and the Sabres had a scintillating 6-4 win over the Leafs.

"The Leafs have such a big following and a lot of people travel over the border to watch these games," Eichel said. "We'd obviously like to see more Buffalo fans in the crowd, but it's a little extra motivation."

There's a window into his real thoughts on the Leafs. Eichel has played 14 career games against Toronto and has 12 goals and seven assists. That's 1.36 points per game and the goal total and per-game goal average (0.86) is his most against any opponent. He knows darn well what these games mean.

"He's been playing insanely well for quite a bit now," said fellow Bostonian Jimmy Vesey, suddenly no slouch himself with goals in three straight games. "When he wants to go, not many people are catching him, and when he hangs on to the puck, he does it as good as anyone. When he wants to, he can take over a game. You definitely saw that tonight." 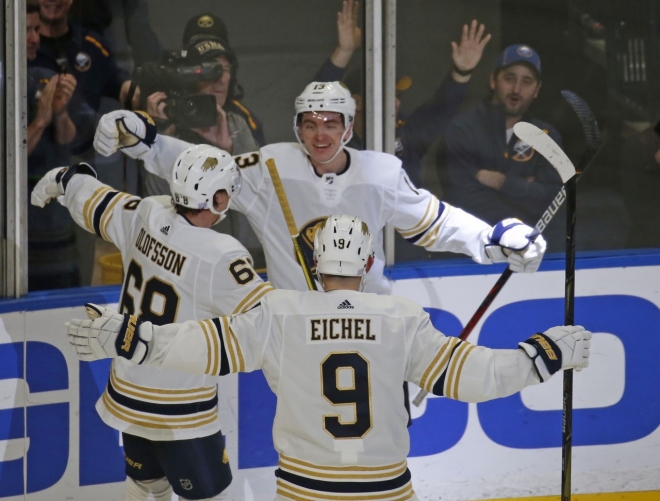 Vesey was referring to the game's signature plays. Eichel's first goal came when he burst out of the penalty box with two minutes of energy built up. Zach Bogosian, whose return has made quite a difference on the penalty kill, got the puck up to Eichel and he flew through the neutral zone. His shot whizzed past Michael Hutchinson to get the Sabres even at 2-2.

It was 3-2 when Eichel then made poor Jake Muzzin look silly in the Leafs end. It was dipsy-doo-dunkaroo around a veteran defenseman with two Stanley Cup rings long enough to find Victor Olofsson in the faceoff circle for a laser that made it 4-2.

"I was just trying to hold possession and Olie finds a great little hole there," Eichel said. "That's a pretty impressive shot there. The goalie is able to see it and it's just Olie having one of the best shots in our league and beating a goalie clean. Real impressive by him. It was a good moment in the game for us to extend that and keep going."

"His skating and puck protection are world-class," Vesey said. "Definitely on display in that sequence. It's fun to watch."

Eichel thoroughly outplayed Toronto's Auston Matthews, who clocked in at 24:48 but was mostly invisible, with only one shot on goal in the game's first 56 minutes and a minus-3 rating.

(I didn't agree at the time, but maybe Mike Babcock knew what he was doing with ice time compared to new coach Sheldon Keefe. Matthews' career-high total didn't result in much of anything and William Nylander's 23:10 resulted in a minus-4 rating).

Eichel was all about sharing the wealth after this one. He marveled at Olofsson's release. He praised the work of Linus Ullmark, who made several key saves early in the game and has clearly wrested the No. 1 goalie slot from Carter Hutton. And he's loving seeing good friend Vesey finally getting rewarded for a couple weeks of strong play.

Coach Ralph Krueger was particularly enthused about Eichel's 200-foot game, which was highlighted by a diving backcheck to thwart John Tavares in the first period and quality work during the Leafs' 6-on-5 push for the tying goal in the final minute.

"He's a dynamic leader not only in the way he's communicating right now but in the way he's playing," Krueger said. "I was most excited about his last couple of minutes and how he came to play without the puck, how hard he defended with the goalie out. ... It was the work he did before (the empty-net goal) that shows Jack is maturing right in front of our eyes. Every day is fun, coaching Jack Eichel."

Eichel is up to 16 goals and 34 points in 26 games. He's seventh in the NHL in scoring and in the rare air where it's always been expected he'd land. One point ahead of Artemi Panarin, two ahead of Patrick Kane. Behind only the Edmonton dynamic duo of Leon Draisaitl and Connor McDavid, the Boston twosome of Brad Marchand and David Pastrnak, Colorado's Nathan MacKinnon and Washington's John Carlson.

It's pretty crazy how things can change. The victory pushed the Sabres back into third place in the Atlantic, ahead of the Leafs on points percentage even though both teams have 28. Yes, third in the Atlantic is a playoff spot for those of you scoring at home.

With a win Saturday night in Toronto and some help from Nashville in its game at Florida, the Sabres could jump into second. That's astonishing, given how bad things have gone this month.

Most fans probably have no idea of those points. The write-off-the-season level is understandably high but there's simply too many games left for that to be valid. The Sabres are 4-9-3 in their last 16 games, but they're suddenly 2-1-1 in the last four.

Imagine what might happen if they can score a power-play goal by Christmas (another 0-2 night dropped their slump to 1 for 35 the last 13 games).

Now the Sabres get to do it all again with the Leafs on Saturday night in Scotiabank Arena. It's a shame this is only four times a season. Especially when the games are in Buffalo, this is one wild rivalry.

"You can feel that it was a highlight day, that it was an experience outside the regular 82-game schedule," said Krueger, who got his first taste of Buffalo-Toronto frivolity on the ice and in the stands. "You could feel it really from the get-go this morning and it was a lot of fun."

Eichel certainly made it that way. 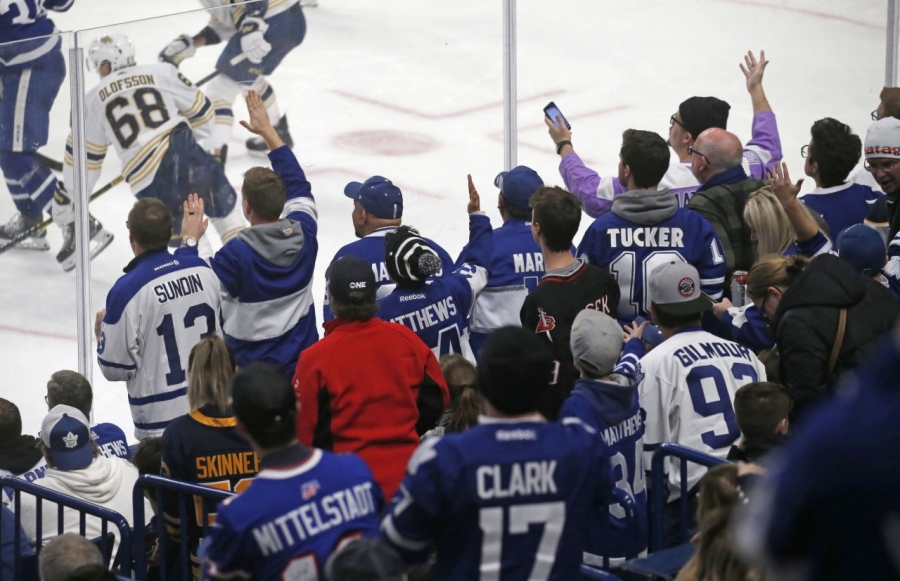