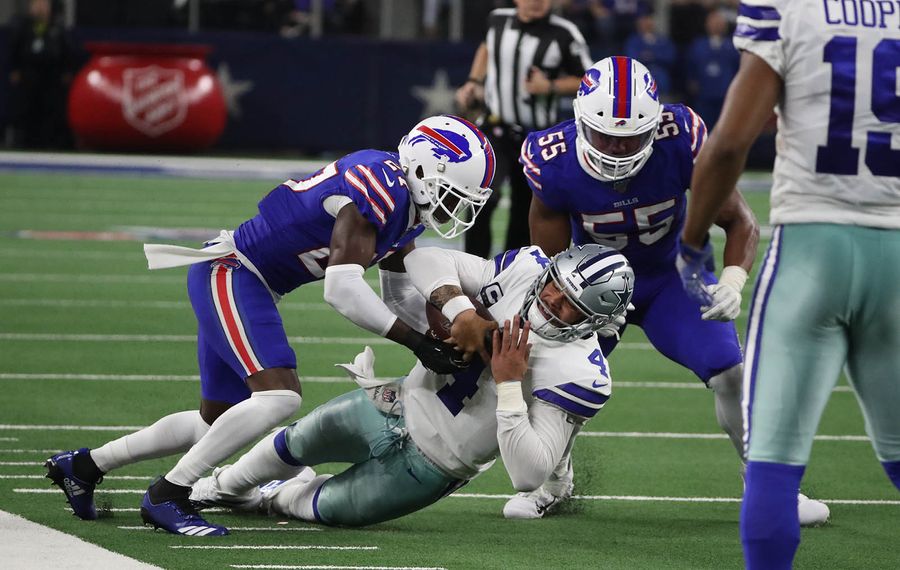 White hit the “Dak Dance,” a viral sensation born from Prescott’s warmup routine — which includes some rather vigorous hip action — toward the tail end of the Bills’ 26-15 victory at AT&T Stadium. White and Prescott go way back – they’re both from the Shreveport, La., area – so the Bills’ cornerback wasn’t showing up the Cowboys’ QB.

Instead, it was a moment for White to smile on what was an otherwise difficult day. The Bills’ third-year cornerback wore custom cleats to honor the memory of his late cousin, Destini “NuNu” Ruffins. She was killed in a car accident in 2018 in White’s hometown. Thursday would have been her 25th birthday.

“It's just one of those days, Thanksgiving, it's her birthday. That's the least I could do,” White said. “What she meant to our family and just how her passing just crushed us, still to this day having that hole. When we get together, how emotional it is. It's just something that I can't put into words, because I will probably get choked up continuing to talk about it.”

Ruffins and White were just a couple of months apart in age. They grew up under the same roof – two of eight grandkids — and their relationship is something White cherishes.

His custom red, white and blue cleats featured NuNu’s picture, along with a happy birthday wish and a message that said, “Miss you always, Love you forever.”

The cleats were made by Mike Jordan, a New Jersey-based artist who has created cleats for about 20 Major League Baseball and NFL players.

“They gave me a general idea of what they wanted,” Jordan told The Buffalo News. “Then they let me do my thing, which is great. I got to work on them right away, we stayed in touch, and I sent them out in time for the game yesterday.

“To know that her family would be able to see it and share that moment, that’s really special to see. I'm getting more used to it the more I do this, seeing my stuff on TV, but it means ever more when it's something that has such meaning behind it.”

Tomorrow is your 25th 🎂 🎉🎁.. I’m going to be playing with a Heavy Heavy Heart to honor you and your beautiful life. It’s been almost two years since you crushed us in half. Sometimes I just go through my phone and look at pictures we had together and just crying continuously, Life Man 😔🥀💔❗️❗️ All the FaceTime calls and crazy text messages I miss but your smile is what miss the most and the way your energy could shift an entire room . I can go on and on ... I just want you to know that I love you to eternity and miss you endlessly.. @dbr___ Somethings Just Don’t Suppose To Be The Way That They Are I’m Hurting 💔💔💔💔..

White posted a picture of the cleats on his Instagram the day before the game, with the following caption: “It’s been almost two years since you crushed us in half. Sometimes I just go through my phone and look at pictures we had together and just crying continuously. … All the FaceTime calls and crazy text messages I miss, but your smile is what (I) miss the most and the way your energy could shift an entire room. I can go on and on ... I just want you to know that I love you to eternity and miss you endlessly.”

Matched up frequently on Cowboys star Amari Cooper, White finished with four tackles and one pass defensed. He got off to a slow start, as did the rest of the Bills’ defense on Dallas’ drive, taking a pair of penalties.

“Last week the referees let us play a little bit,” White said. “That's obviously how you feel out the game on the first drive, because I played the ball the same way I played last week. And then on a double move with (Cowboys receiver Michael Gallup), he did the slow go and he ran right into me, so I was asking the ref like, ‘what am I supposed to do if he just runs right into me? We were able to adjust and try to get that stuff corrected.”

Cooper finished the game with eight catches for 85 yards, but was held out of the end zone.

“He did a great of picking in our zones, settling down and selling his routes to the holes in our defense. Great receiver, man,” White said. “Runs great routes, crisp routes getting in and out of his breaks, so he had a great game.”

One individual performance, however, was not enough to overcome what the Bills did as a team in moving to 9-3 on the season.

“We just continue to go out and win,” White said. We'll let other people decide (if the Bills proved something Thursday). I feel like, the way that we prepare and the way that we go to work and believe in each other is next to none. I feel like that is what ultimately leads to us having on-field success.”

The Bills are sitting pretty. At 9-3, they likely need just one more win in the final four games to secure a playoff berth. As it stands now before the rest of Week 13 is played Sunday and Monday, they have a 2.5-game lead on the first wild-card spot in the AFC. Four teams – the Steelers, Raiders, Colts and Titans – are tied at 6-5.

According to the New York Times’ playoff machine, the Bills have a 93% chance to make the playoffs.

The easy pick would be quarterback Josh Allen. It would be a good one, too, but we’ll go with Beasley in his return to Dallas. Buffalo’s slot receiver finished just 2 yards shy of setting a career high in single-game receiving yardage, with six catches for 110 yards. Beasley’s 25-yard touchdown reception opened the scoring for the Bills, who were off and running from there. Beasley was the last player in the locker room after the win. Once he came in, his teammates mobbed him and crowd surfed him around like he was a rock star. On Thursday, he was.

1. Wide receiver Robert Foster was not only able to play after suffering a hamstring injury in Week 12, he played a lot. Foster was on the field for 28 offensive snaps (42%), his highest total of the season. Foster made one catch for 20 yards and rushed one time for 7 yards. He also drew a 23-yard pass-interference penalty.

4. Wide receiver Andre Roberts played just one snap on offense, but it was a big one. Roberts took the handoff from Josh Allen on what became a double reverse, pitching to wide receiver John Brown, who was headed in the opposite direction. Brown then threw the ball to a wide-open Devin Singletary for a touchdown.

5. When Frank Gore is in the game, there’s a pretty good chance the ball is coming his way. Gore took just 15 offensive snaps (22%), but touched the ball 10 times, with nine carries and one reception.

The Bills get to sit back this weekend and enjoy some extra rest as the teams chasing them in the AFC postseason race play. They also get to watch their next opponent, the 9-2 Baltimore Ravens, in the biggest game of the weekend, against the 10-1 San Francisco 49ers. Some have asked if the Week 14 game against Baltimore might be flexed to Sunday Night Football. While it would be a great matchup, that decision has to be made with at least 12 days notice. The  deadline has passed, so it won't be happening. Here are three things to know about the Ravens …

1. Lamar Jackson is probably the frontrunner for league MVP. Coming off a dazzling performance on Monday Night Football, Jackson is the talk of the NFL. The fifth and final quarterback taken with the last pick in the first round of the much-hyped 2018 draft class is making plenty of teams regret passing on him. Jackson has completed 66.9% of his passes this season for 2,427 yards, 8.1 yards per attempt, 24 touchdowns and just five interceptions. He’s rushed for 876 yards and another six touchdowns and has not lost a single fumble.

2. They are tough to throw on. The Ravens acquired cornerback Marcus Peters in a midseason trade with the Rams, and it’s looking like a smart move. Peters has five interceptions in the last three games. Analytics website Pro Football Focus has given Peters his second-highest coverage grade. Fellow cornerback Marlon Humphrey is also ranked in the top 15, while safeties Earl Thomas and Chuck Clark are both in the top 10.

3. They will have to overcome a key injury up front. The Ravens lost center Matt Skura during the MNF game against the Rams in Week 12. Baltimore beat writers consider him to be one of the more underrated players in the league. That’s because the Ravens use a pistol formation, and the location of the snap is critical. Skura was replaced by Patrick Mekari. It remains to be seen if that change will have a negative impact on Baltimore’s potent offense.