After a lot of thought, Corrie Murray decided to take a chance. Her son Matt is 19 months away from graduating from Newfane High School. Like any student, he assumes that guarantees two more years of playing the varsity sports central to his teenage world.

Yet if the rules stay as they are, his high school athletic career is over. Under state regulations, Matt, at 19, is ineligible for Unified bowling and basketball, activities Corrie credits with transforming her son's life. With dozens of Unified student-athletes in that situation throughout Western New York, Corrie puts her faith in the chance a major change is about to happen.

Until she has no other option, she will hold off on breaking the news to Matt that he must give it up.

“I can’t tell him,” she said. Her son is autistic. While he loves to bowl, it is Unified basketball that visibly lifts his self-confidence. Corrie tries not to envision his sadness at the notion he can no longer compete.

She is hoping the state Board of Regents, when it again takes up the matter in January, will agree with many  parents, coaches and administrators. Those advocates believe an airtight eligibility rule for high school athletics – you cannot turn 19 before Sept. 1 of your last year – ought to be revised for the circumstances surrounding what are known as inclusive sports.

A public comment period ended a week ago, and advocates can do nothing now but wait to learn if their feedback made a difference. If the rule does not change, Corrie is bracing herself for the probability that her son will respond in the same way as Scott Slade Jr., a June graduate of Iroquois High School who embraced Unified competition until he was 19.

His mother, Marylou Slade, said it is hard to talk about the moment when she had to tell Scott he was ineligible, though he still attended Iroquois.

“He was devastated,” Marylou said. “He has an intellectual disability, and he couldn’t understand why they wouldn’t let him play anymore.” 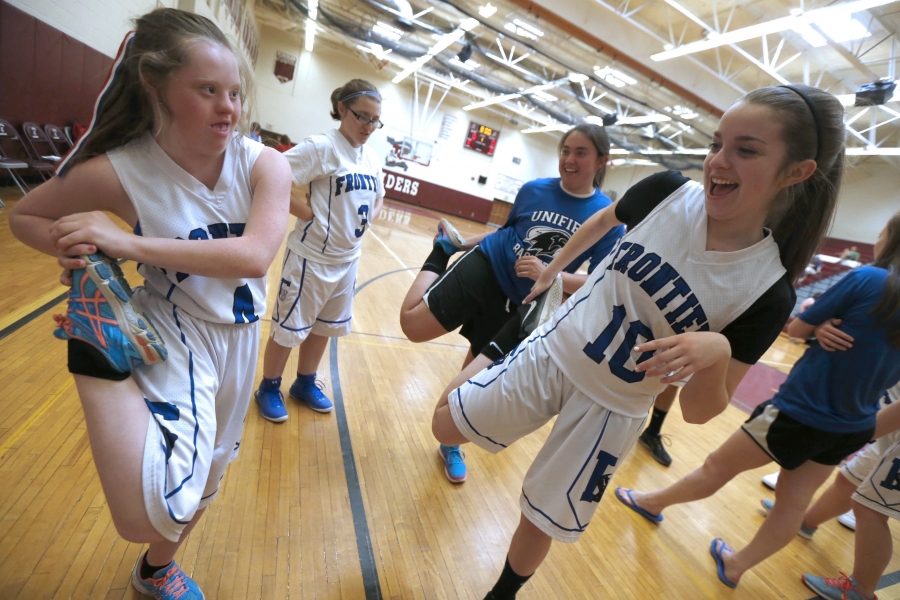 The Unified sports program, which began six years ago in Section VI, has exploded in popularity from six to 38 schools. The idea is bringing young people from the entire student body together on the same roster. Under the rules of Unified basketball, for instance, three players with developmental disabilities share the floor with two teammates from general education programs.

To many coaches and parents, in a time when ferocious competition can engulf varsity sports, the inclusive atmosphere achieves the high ideals of education. As described by Brian Pane, the Unified coach at Cheektowaga, Unified athletics are "about learning to be a better person in society."

In other words, they epitomize competition as it is supposed to be.

“I can’t explain it,” said Sal Constantino, the longtime varsity boys basketball coach at Niagara Falls who this winter will shift over to help succeed Karyn Morrison, who recently retired, as one of the Unified coaches. “You can’t help but cheer for the other team when they score, too.”

That brings all the advocates to a central point: If Unified is a dramatic break in many ways from the traditional varsity landscape, then does it not make sense, in this one case, to alter the eligibility rule as well?

In New York, students with developmental disabilities are allowed to attend high school until they are 21. Even so, they are bound by the eligibility standards covering all existing sports, which means they must stop playing at that  19-year-old threshold.

Timm Slade, executive director of Section VI and an uncle to Scott Slade, said the original proposal for a change came from his section's athletic council more than a year ago.

He described the potential revision as "an outstanding opportunity" for many student-athletes. Since it involves an entirely new set of circumstances, he said the only way to see if it works is a "wait and see" approach once the change is approved.

Doug Ames, coordinator of Unified sports in Western New York since they began, said the concern is always that schools will keep Unified winning in perspective, as most do now. He anticipates a school-by-school monitoring process to make sure no student-athletes compete whose stature or abilities might change that dynamic.

"If everybody does it for the right reasons, and the priority is the chance for these young people to put on uniforms and enjoy competition, than we're all good," he said. He emphasized that he has yet to see an inclusive athlete in this region whose skills would have caused a problem with two extra years.

The rule as it is makes sense in the broad umbrella of most varsity sports, said Iroquois coach Sean Lauber, since the size and strength of a college-age athlete would be unfair and even potentially injurious to younger, smaller students.

Anyone who has seen a Unified game, Lauber said, knows the pace and intensity are entirely different. He said it is achingly difficult to tell young people — high school students in all other ways — that their eligibility is abruptly finished.

He hopes the rule change, if approved by the Board of Regents, would mandate that each school must carefully review its roster. In that way, schools would be aware of a rare case in which a student-athlete was simply too strong or athletic for Unified competition.

“All we’re asking is for the ability to monitor ourselves,” Lauber said.

Morrison, the retired Niagara Falls coach, said she never saw a situation where another player put the safety of her team at risk. She noted one of the missions for general education students who take part is helping set the pace and continuity of each game.

“Everybody on the floor,” she said, “was always conscious of everybody else.”

One of the most vocal proponents of a new rule is Clarence Coach Beth Brawn-Celotto, who said she has nine student-athletes who will be forced, at 19, to watch.

“We’re looking at kids who physically and mentally aren’t typical 21-year-olds,” he said. “If you’re going to allow these students to stay in high school until they’re 21, why wouldn’t you allow them to play these sports until they’re 21?”

The benefit, she said, goes beyond the basketball court. Teenagers who on some subtle level often spend lifetimes feeling set apart are abruptly at the center of games that attract passionate support from their peers.

Marylou Slade recalled how one of the greatest moments in her son’s life was the first time he scored a basket and his classmates stood and roared. Slade found herself crying at the sheer joy and wonder on Scott's face.

The Unified sports are a phenomenon, and she maintains that it is contradictory to in some ways see those teams as an innovative way of clearing barriers, while at the same time restricting student-athletes though a rule meant for completely different forms of competition.

Corrie Murray recalled how Newfane Coach Justin Balcom helped her son Matt learn and embrace what it means to play center. He now lifts the ball high above the court and checks the lanes for open teammates, and in that instant he knows how it feels to be the heart and soul of a team.

"There's such a change in these kids, from start to finish," Corrie said.

Until it is the only choice, she will not tell Matt that he is done.