At first, with so many moments from so many years blurring together, Pete Gogolak did not recall his game-winning kick in a Thanksgiving day victory over the San Diego Chargers that served as a critical pivot in the early history of the Buffalo Bills.

It was only when he was reminded of his triumphant handspring that it all came back.

As they take on the Dallas Cowboys on Thursday, the Bills are looking for a threshold win on the road against a division-leading opponent, a signal to the football world that the franchise has moved to another tier.

Fifty-five years ago, on another Thanksgiving Day in San Diego, an unforgettable Bills squad underlined a similar message in what Steve Weller, a Buffalo Evening News columnist of the time, described as the most significant win, up to that point, in team history.

The Bills had hit a difficult moment in a monumental season. Buffalo rolled to wins in its first nine games before losing to the Boston Patriots, their top divisional rival of the time in the old American Football League. With the Patriots in close pursuit, Buffalo’s next game was on Thanksgiving, on the road, against the Chargers – the defending league champions, and a team the Bills had defeated at home earlier in the year.

The showdown led Weller to reflect that coach Lou Saban’s squad was confronting a kind of pressure it had not faced all season.

Buffalo not only won, but did it with one of the most memorable comebacks in the team's fledgling existence.

Trailing 24-14 in the fourth quarter, the Bills drove to the Chargers 2-yard line, where San Diego made what Buffalo Evening News sportswriter Larry Felser called “a great defensive stand.” With less than seven minutes remaining, San Diego simply needed to burn some clock to all but cement the win. Instead, Bills linebacker Mike Stratton muscled through to drag down John Hadl, San Diego’s quarterback, for a safety.

As Felser recounted, Hadl then punted his first free kick out of bounds, meaning his second try was from his own 15. Charley Warner’s stunning return put the ball on the San Diego 18, and a pass interference call moved the ball to the 5, setting up a touchdown plunge by quarterback Daryle Lamonica that pulled the Bills within 24-22. Lamonica was sacked on his first try for a two-point conversion, but another penalty gave him a second chance. He took it in himself, and it was 24-24.

Stratton promptly stepped up again, intercepting Hadl after Tom Day tipped a pass. Runs of 11 and 18 yards by the legendary Cookie Gilchrist moved the ball deep into San Diego territory, where Saban let the clock wind down before Gogolak drilled a game-winning 33-yard field goal. He was swarmed by his teammates – then did a handspring in celebration.

The only other time he ever tried it, he said, was later in his career, after a win at Yankee Stadium.

Gogolak, who attended Cornell after playing high school ball at Ogdensburg Free Academy, would leave the Bills for the New York Giants before the 1966 season, helping to trigger a bidding war between the AFL and the more established National Football League. Still, he was only 22 in 1964, a guy barely out of college who was missing his family on Thanksgiving.

Considering the risk of pulling a muscle or some other injury, he said doing a handspring was probably not the wisest move for a kicker on a team in contention for an AFL title.

"But that was a huge win," he said. "It carried us to the championship game."

Indeed, the victory had sweeping meaning. It gave the Bills much-needed breathing room in their division as they closed in on hosting their first AFL title game, set for the day after Christmas. As Buffalo sports historian John Boutet points out, the Bills would go on to knock off the Patriots in a divisional showdown of even bigger meaning before moving on to one of the timeless moments for the franchise.

They took on the Chargers on Dec. 26 for the championship, and Buffalo’s 20-7 victory at the old War Memorial Stadium would be the first of two consecutive titles, still the only ones in team history.

A critical pivot in those fortunes happened 55 years ago, on Thanksgiving Day. While this year's team is at an earlier stage of development, that statement of skill and resilience on the road is not so different than what these Bills hope to do Thursday, against the Cowboys. 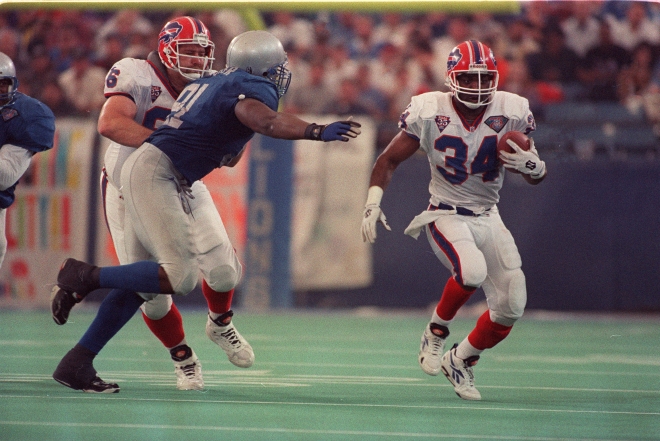