The Greek diner scene is such a core strand of Buffalo’s dining DNA that sometimes locals are dismayed to discover that the breakfast meat choices end at ham, bacon and sausage. Not a souvlaki in sight, and when you ask for tzatziki with your eggs, they act like you’re the weird one.

In 2013, News Staff Writer Samantha Christmann mapped the epic family tree of immigrant success, 30-plus Buffalo-area places with Greek American roots. Second- and third-generation places are taking various routes, with the Greek parts of the menus typically getting shorter and shorter with each mile distant from the city line.

Not all of the Greek pantheon made the transition to the present day unaffected by the vagaries of time and state minimum wage laws, either.

But at Kostas, the newly renovated Greek emperor of Hertel Avenue, the diner hustle never stopped and the Hellenic flavors are strong as ever. 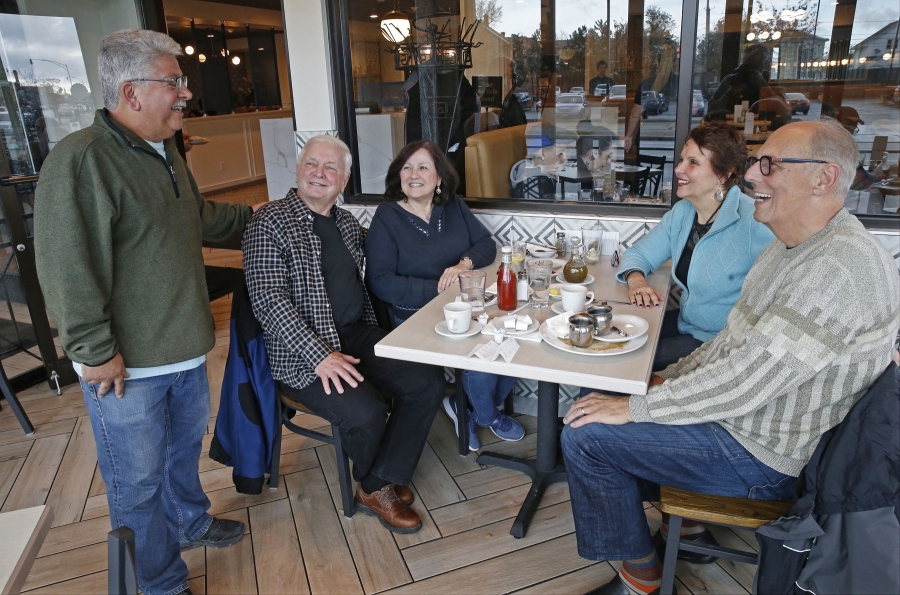 In Buffalo, diners – the restaurant of last resort – became the first choice for a broad swath of dining situations, from pancakes to late-night, post-revelry dinners. Kostas added a full bar, so you can apply $8 bloody marys at will.

The freshened-up interior is big on tan, pale blue and hexagonal tile, but the cluster of bottles in the middle of each table – including the essential Greek dressing cruet – were unchanged.

Specials of pumpkin pancakes ($8.29) – vast, puffy, eggnog-spiced – and a 5-ounce steak and eggs ($9.29) were good values, even if the steak was medium instead of medium-rare. Same with the eggs Benedict with smoked salmon ($14.29), which was loaded with fish, even if the hollandaise lacked bright, lemony character.

In all instances, the home fries were crisped on a griddle before being served. At a diner, this is not a small thing. 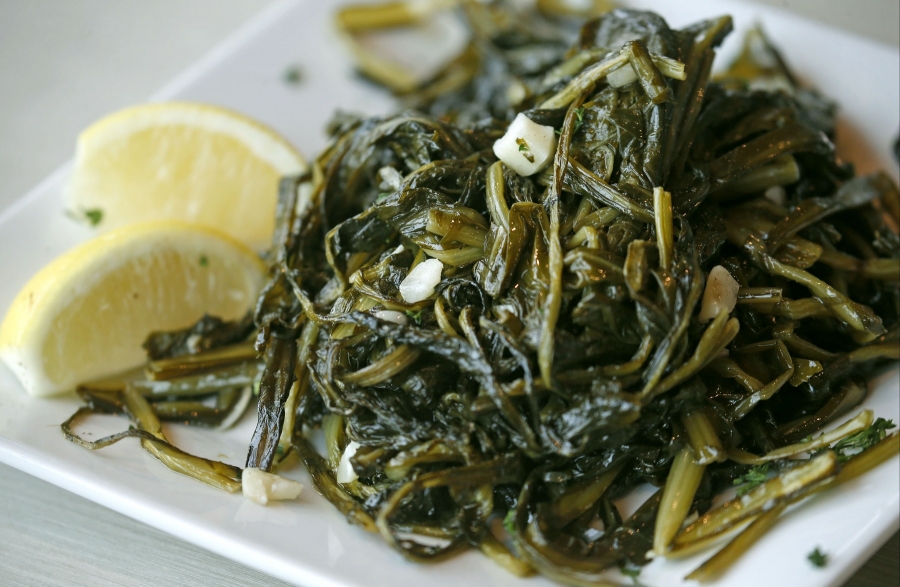 So the pancakes and eggs were excellent, the American food solid, but I’m here for the other stuff.

The statuettes have disappeared, but the Greekness of the food persists. Yogurt, strained Greek style, forms the base of its essential tzatziki, the cucumber-garlic-yogurt sauce that is the blue cheese dressing of Greek cuisine. Other shameless bandits substitute sour cream. Which, to be clear, is no substitute at all.

At its peak, saganaki ($13.99) is a pyrotechnic appetizer, served in a ball of flaming Metaxa brandy before flames are doused with freshly squeezed lemons. But no one wants to risk setting off the sprinkler systems anymore, and we have to make do with the PG-13 version which is still plenty delicious. The paperback-book-sized quarter-inch slice of expertly browned cheese was the first plate cleaned off, scraped onto toasted pita bread with extra spritzes of lemon. 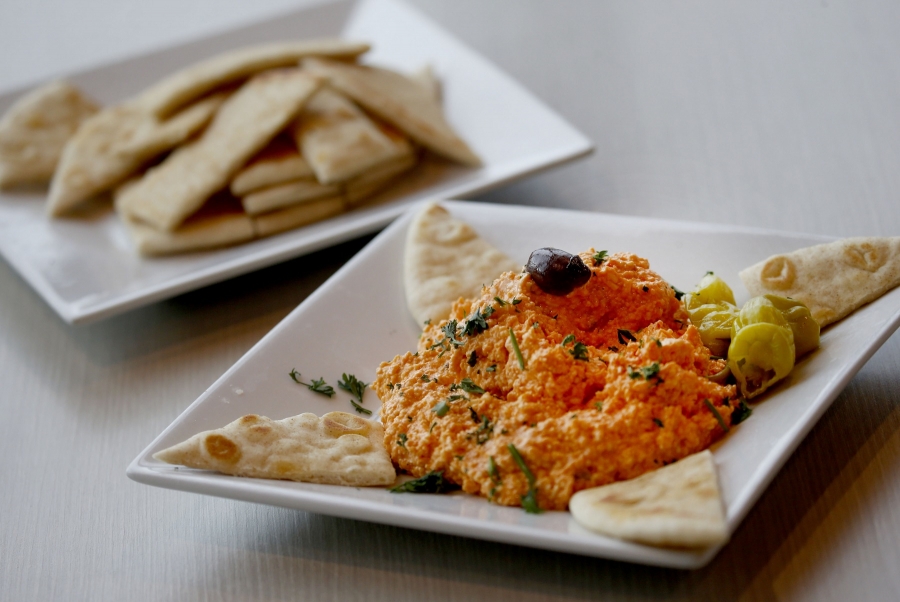 Then came the horta ($7.59). Dandelions have a bad rap in this country, hunted from lawn to lawn. In Greece, they’re better than spinach, that wimpy-tasting green that only wished it had dandelion’s vitamins. Kostas serves them sautéed in olive oil and copious garlic, with lemon wedges to get into the groove.

Fried smelts ($12.99) are served on horta with both tzatziki and tartar sauce, which is genius, for the Anglo-Grecian appetizer of the month. The garlicky combination of greens and the little fish with all their oils might even count as a healthy adventure.

Taramosalata ($7.59) is a tangy, creamy, fishy dip made of mullet roe, lemon, olive oil and onions, like Bison onion dip crossed with tuna fish, in a good way. It was unavailable on my visit, but we delightedly tucked into some tirokafteri ($7.99), a blend of feta cheese; sweet, fruity roasted red peppers; and spicy, rousing cherry peppers smoothed out with olive oil.

Get the green beans “lathera,” cooked to sweet silkiness in light tomato sauce, for your vegetable. By all means order the Greek combination platter ($24.99). Moussaka, béchamel-topped beef and eggplant casserole, and pastitsio, its pasta-based brother, were classic, perfumed with cinnamon. Chicken souvlaki was dry, the dolmades (grape leaves stuffed with rice), mushy. Gyro (sliced lamb and beef meatloaf) and spanakopita (spinach and feta in flaky phyllo dough), were solid. 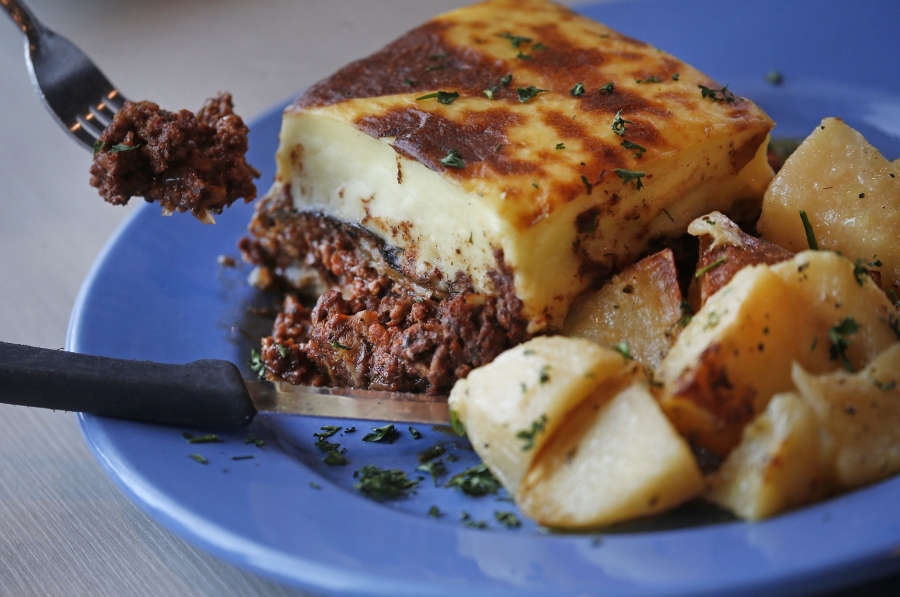 Lamb chops ($25.99) were grilled past the target, to medium, but remained plenty tender, deftly crisped-up bites of rosemary-infused meat.

Among desserts, the baklava sundae’s juxtaposition of warm, crispy, honeyed pastry and cold ice cream ($8.49) is scaled to please an entire table. The rice pudding ($3.99) is a classic, if you believe raisins belong in rice pudding. Also appreciated: Ordering tea means you get a whole caddy of options to choose from, and a pot of hot water.

Our server, Savannah, was extraordinary: personable, focused, swift and able to predict what we might need before we knew ourselves.

At Kostas, you can readily see why the Greek diner dominated Buffalo, especially with a veranda table at dusk on a temperate day. Fast, tasty food at a good price makes this Greek place a Swiss Army knife of restaurants. Enjoy your French toast and your Belgian waffles, but Kostas is Greek to me.

Atmosphere: busy but not overwhelming. 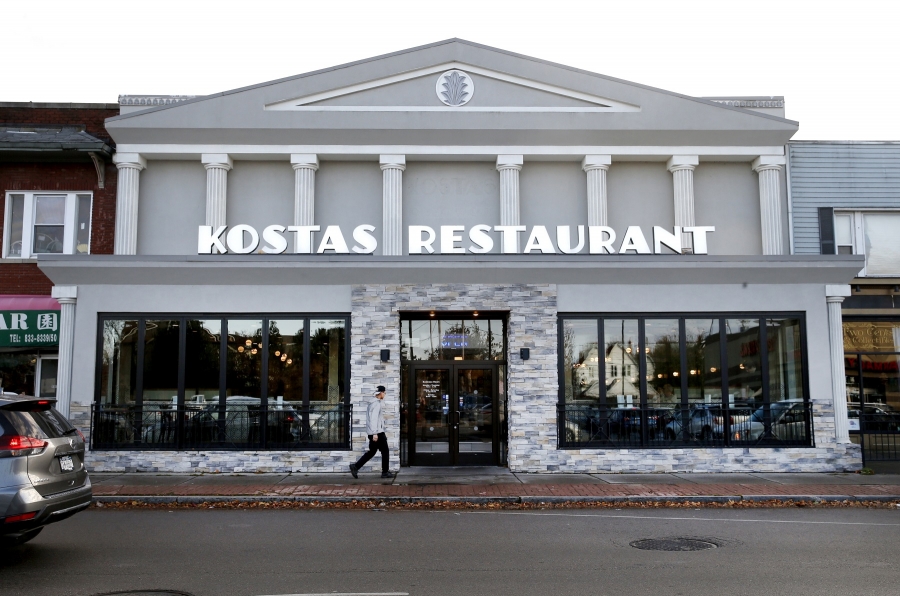