Happy Thanksgiving. Area fishermen will not be thankful for the weather as another severe wind situation will impact our local waters. Head to the streams or inland lakes for the best chance for success.

We finally had a decent perch report, coming from Denis Kreze of Fort Erie, Ontario. He found the perch in 61-63 feet of water and the key was finding the bait. If you can find bait, you’ll find the perch. He was fishing straight off Crystal Beach on the mud flats. Kreze also did well on bass using Venom Vibra Max blades, focusing his attention around Waverly shoal and around the windmills in 35-45 feet of water. Try to locate sand and rock areas combined with a drop off. In doing so, he caught some decent walleyes, too. Myers Reef also was producing a mix of bass, walleye and perch. In the streams, Justin Wekenmann of Farnham reported that his last time out he found plenty of steelhead around the mouths of some of the creeks. It was primarily a jig bite. Eggs have been slow. Cattaraugus Creek was fishing very well when the clarity was good, but who knows what will happen with the storm arriving this week. He did find some fish up through Zoar Valley. Scott Feltrinelli with Ontario Fly Outfitters also reported decent fishing on the Erie tributaries with the warmer weather.

Mike Marisa of Johnstown, Pa., shares that he caught quite a few steelhead using a mix of beads and egg sacs in pink – along Artpark and up in the gorge around the whirlpool just prior to the last wind event. Things were a bit more difficult earlier this week due to turbid conditions. Look for the high winds blowing in to muddy the waters for river fishing for at least a few days. The first anglers to get any action will be the shore guys and gals in the gorge. Mark Plennert of Niagara Falls had some success off the NYPA Fishing Platform in the gorge when waters finally cleared this week, but take note that the last day that it could be open is Nov. 30. Call 286-6662 to check. On Tuesday this week, Capt. Frank Campbell of Lewiston and Gary Hall of Niagara Falls timed things just right to catch some nice steelhead to 12 pounds, using MagLips off three-way rigs. That will be short lived with strong winds arriving. Musky season in the lower river is open through Dec. 15 while upper river action closes Nov. 30. The storm probably will force an early closure of the musky season for anglers after winds rile up things. 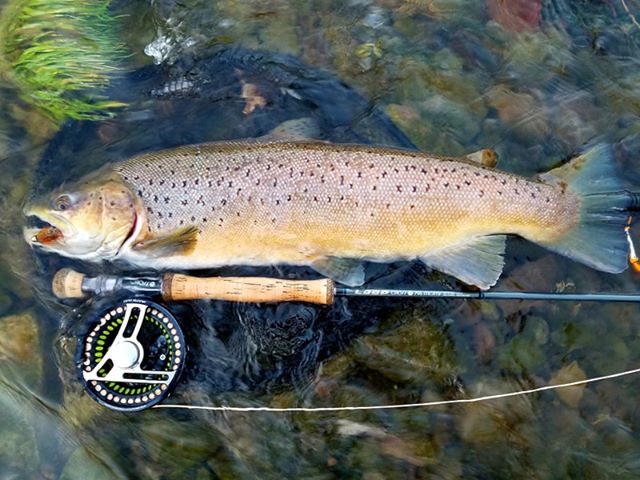 Scott Feltrinelli of Ontario Fly Outfitters reported catching some brown trout and steelhead. Water temperatures and conditions were very favorable and should stay nice through Christmas if Mother Nature cooperates. Dr. Steve Rauh of Webster found some good action with Feltrinelli. The water has been high and lightly stained due to snow melt. This is perfect for big fish to move throughout the creek systems and feed in a post spawn manner. Bug streamers have been working well for fly fisherman targeting browns. Steelhead are moving into creeks as well. In the Oak Orchard River, Ron Bierstine with Oak Orchard Tackle reports that the Oak and other area streams are on the retreat with medium flow. There is still a mix of brown trout and salmon, with some steelhead and Atlantic salmon mixed in. You still must move around to seek active fish. Fishing pressure continues to be down.

Musky season will close on Nov. 30 in the lake so there are only a few days left. A few anglers have been fishing perch around the lake with some success.

November 30 is an important day for fishing seasons. It’s the final day for muskellunge in the upper Niagara River, Buffalo Harbor, Lake Erie and Chautauqua Lake. However, the Lower Niagara River, Lake Ontario and the St. Lawrence River season is open through Dec. 15. This is one reason why the Niagara Musky Association holds its John Henning Memorial Musky Tournament in December, set for December 1 in the lower river only. You must be a member of NMA. Call Scott Kitchen at 939-0006 if you are interested. Nov. 30 is the final day of the regular bass season in the state. For the most part, it turns into a catch and release season on Dec. 1 throughout most of the state. One exception is Lake Erie, where a special season begins Dec. 1 allowing for one bass with a minimum size of 20 inches long. You can also fish with live bait. If you have any questions, consult the regulations at www.dec.ny.gov. One final note is that lake trout season opens on Dec. 1 in the lower Niagara River on the Canadian side only. This was one of the reasons that an extended lake trout season was proposed in the lower river. The comment period for that ends Dec. 14. Lake trout season opens Jan. 1 in New York waters of the lower Niagara and Lake Ontario.