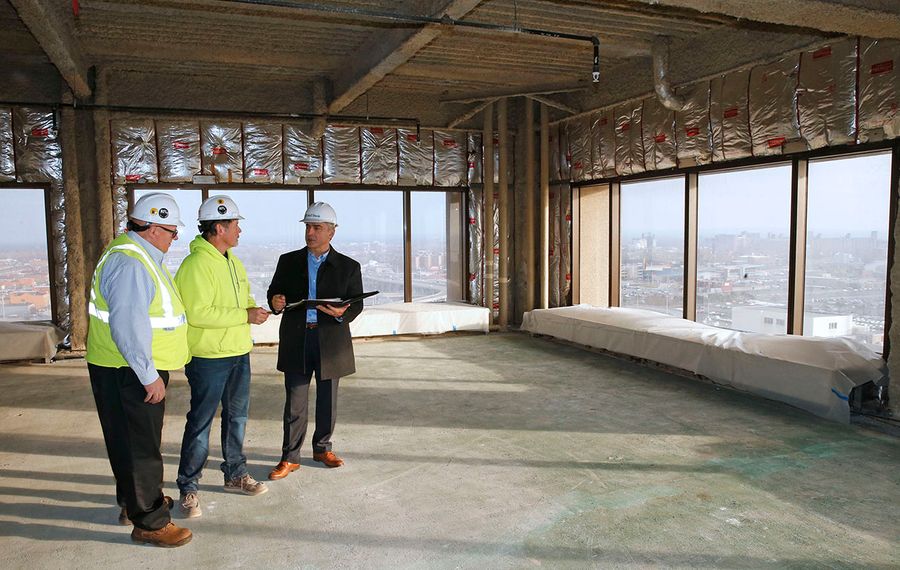 High above downtown Buffalo, a transformative project is getting underway.

M&T Bank is starting to convert vacant space inside Seneca One tower into its "tech hub." The project is significant for the future of M&T, as well as the city's tallest building, which owner Douglas Jemal is reviving. The downtown core also will benefit from a prominent new tenant.

But first comes the task of turning vacant space into modern, tech-ready offices. M&T will occupy floors 13 through 23 of the 38-story downtown landmark, plus two floors in the building's pedestal. M&T expects to locate at least 1,000 of its employees in the building by mid-2020 and to have at least 1,500 employees working there within three years.

"It's a dramatic improvement to this building, to the complex in addition to the waterfront," said Frederick Krajacic, group vice president of property management in M&T's corporate services division. "For us to have this kind of investment in our headquarters city in Buffalo, and to do it in such an innovative way and trying to bring additional technology jobs to Buffalo and get economic growth in Buffalo, it's an amazing experience to be part of that effort."

The project, led by construction manager LeChase Construction, will unfold in two phases.

The first phase, which will focus on nearly all of the floors M&T is leasing inside the tower portion, is expected to be complete by the end of March and ready for occupancy a few weeks later. The second phase, involving two lower levels in the complex, plus the 23rd floor, should start in January and finish up in May or June.

M&T is still determining when its employees will move in, even after the office space is ready.

"It's a little complicated because we're moving (employees) from a number of suburban buildings, and we're also shuffling people from Lafayette Court (on Main Street)," Krajacic said.

M&T, which is leasing 350,000 square feet at Seneca One, also wants to ensure the amenities Jemal is installing for tenants will be ready for its employees when they move in.

About a year ago, M&T issued a request for proposals for a tech hub location. Last June, the bank last June announced Seneca One tower as its choice.

Rene F. Jones, M&T's chairman and CEO, has described the tech hub as an "innovation factory" for developing and deploying technology. The bank hopes other tech-minded organizations and businesses will lease space in the complex, to bolster the region's tech sector. M&T has not disclosed the amount it is spending to create the tech hub. 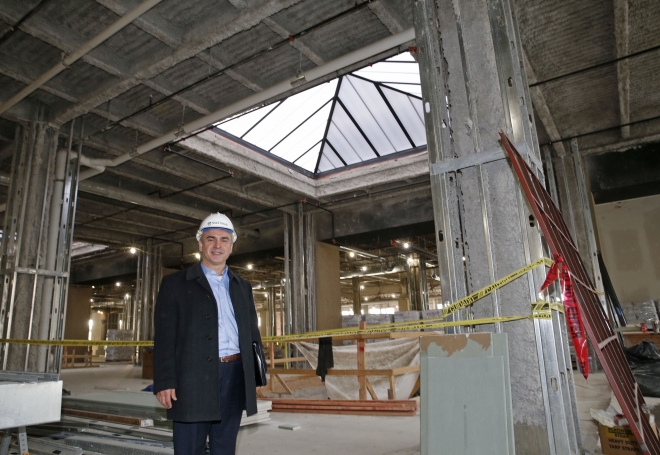 Frederick Krajacic of M&T Bank, at one of the two lower levels of M&T's future tech hub. (Robert Kirkham/Buffalo News)

Construction crews are just getting started, but M&T's finished product at Seneca One will be notable in a number of ways:

• M&T will have 1,600 assigned seats in its tech hub, with no private offices, not even for senior tech leadership. But there will also be 1,600 "unassigned" seats, in places like huddle rooms, cafes and libraries, where employees can work privately or in small groups.

"There will be lots of opportunities for employees to get into private space and standup space for discussions and presentations and so forth, but no real private assigned space for anybody, and that's different from anything else the bank has done anywhere across our 1,000 properties across the country," Krajacic said.

• The layout will be an open-space office format aimed at promoting collaboration. That setup will allow employees throughout the floors to benefit from the sunlight and sweeping views of the city, not just the people seated closest to the windows.

• The two lower levels occupied by M&T will place bank employees closer to street level, creating a sense of connection with the community. "You'll be able to walk down Pearl and actually see M&T people working at their desks, just on the other side of the glass," Krajacic said.

• On the lower of those two levels, M&T will have an arcade for employees, a command center to monitor M&T technology, and laboratories to test hardware, software and a new generation of ATMs. Currently, those labs are spread among different M&T locations.

M&T's tech hub will be a driving force in rejuvenating a tower built between 1969 and 1972 as Marine Midland Bank's headquarters. Over the next several months, that work benefit the construction crews on the job.

"You can't ignore the economic impact of a project of this size, this kind of build-out and the variety of jobs — and well-paying jobs," Krajacic said.