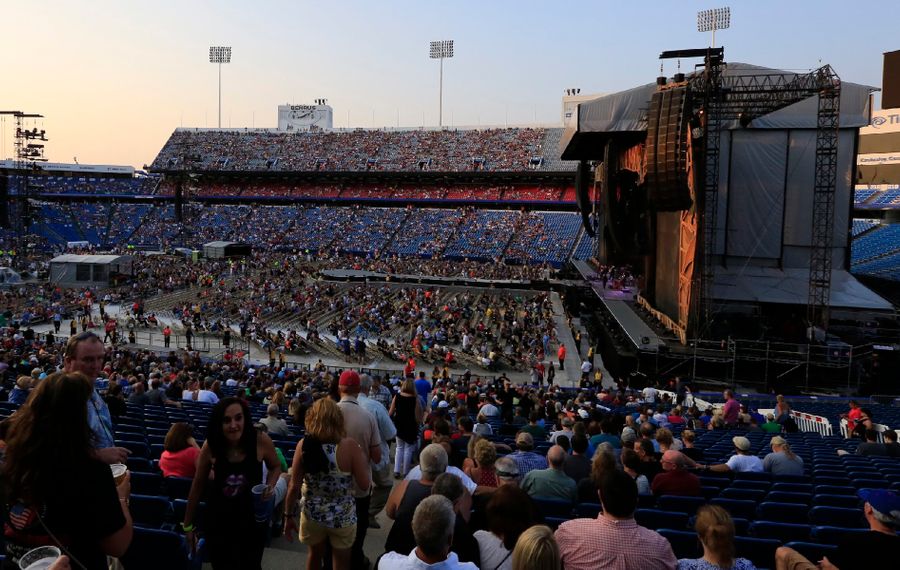 The recent announcement of Billy Joel’s August 2020 appearance at New Era Field has gotten a lot of people talking about concert-related issues in the modern music industry era. Many readers have reached out to me, asking for information, insight or opinion on some of these issues. Here are some of the questions I’ve been most frequently asked regarding concerts in Western New York.

Why are concert tickets so expensive?

The most accurate answer might be what you’re likely holding in your hand at this very moment. Your phone, through which you likely stream music either for free or for a monthly fee, little of which makes its way to the artist you happen to be listening to.

Once most consumers stopped paying for music, the music industry as we formerly knew it ended. Artists used to tour to support their albums, record sales providing the lion’s share of their income. Now, if they release new music at all, they do so in order to support their touring activities.

So you might think you’re getting your music mostly for free, through Spotify or Apple Music. However, if you want to hear that music performed live, you’re going to be making up the difference in lost artist revenue via ticket prices.

What are “fan presales?”

These are largely scams that ostensibly allow members of an artist’s fan club to purchase tickets prior to a general public on-sale. The problem is, professional scalpers have no problem joining an artist’s fan club in order to scoop up as many tickets as possible and immediately dump them onto secondary seller sites, where they’ll go for sometimes as much as 10 times their face value worth. Using multiple computers to create multiple fan club accounts offers pro scalpers the opportunity to grab as many of the four-ticket or eight-ticket-limit presale offerings as possible in one fell swoop. Real fans are often left out in the cold.

What are “credit card presales?”

These were ostensibly designed to reward holders of a certain credit card associated with the artist or tour via a promotional agreement. Unfortunately, scalpers have credit cards, too. (See above.) 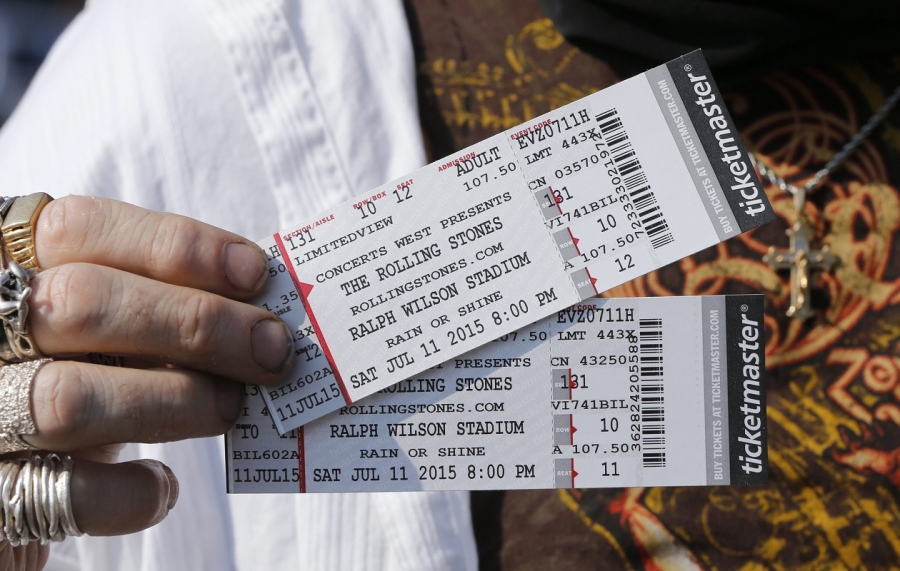 Why is it so hard for me to get a ticket through Ticketmaster.com during a general public on-sale?

Sometimes, the amount of traffic on a given site during the initial public on-sale rush simply overwhelms the process, and a consumer finds themselves nudged into a digital waiting room, only to find that most of the decent seats have disappeared during the interim.

Just as often, scalpers are grabbing tickets en masse and placing them on secondary seller sites.

In 2018, an investigative report by CBC News and the Toronto Star alleged Ticketmaster was buying up its own tickets and reselling them at higher prices on the secondary seller market, taking in additional service fees in the process. So there’s that. …

What is the deal with secondary sellers and why are there tickets priced so far above face value on Ticketmaster.com?

When the king of secondary ticket selling, StubHub, was acquired by eBay in 2017, Ticketmaster responded shortly afterward by shelling out $265 million for Illinois ticket broker TicketsNow, in effect creating its own officially sanctioned secondary seller site. Within a year, Ticketmaster was second only to StubHub in secondary ticket sales, ahead of both Vivid Seats and SeatGeek.

Of course, Ticketmaster is owned by concert promoter Live Nation. This means that, for any “event X,” the concert promotion, primary ticket sales and secondary ticket sales are all handled by a single company. If you think this sounds a little bit fishy, you’re not alone – in 2009, Bruce Springsteen complained of what he saw as a conflict of interest between Ticketmaster and TicketsNow, after fans were directed to TicketsNow immediately after primary tickets for his shows were sold out. Springsteen shows are no longer associated with TicketsNow, but the practice continues.

For example, if you’re hoping for a great seat to see Billy Joel at New Era Field on Aug. 15, 2020, and you didn’t grab one during one of the presales, you can now purchase a secondary market one directly from Ticketmaster. I went through the motions of doing so and found myself at the final portal prior to pulling the trigger on a single seat in section C, row 15 – for $800, plus service and order processing fees. ($118.40 service fee, which goes to Ticketmaster, and $3.25 order processing fee, which goes to … Ticketmaster.) Comparatively, seats in the upper levels are going for $75.

It’s easy to rail against the seeming injustice of this, but the cold truth is, Ticketmaster and Live Nation are businesses, and as such, are not given to leaving money on the table.

People are routinely paying this kind of money for tickets. Until that changes, nothing surrounding it will either.

Why aren’t there more multi-artist shows at New Era Field, like there were in the '70s and '80s?

On July 26, 1974, something called “Summerfest at the Stadium” took place at what was then known as Rich Stadium. The show, promoted by Festival East Productions and presented by WPHD-FM, featured prog-rock legends Emerson, Lake and Palmer, with guests Joe Walsh and the James Gang and Lynyrd Skynyrd. Tickets were priced $7 in advance. You could get them by sending a stamped, self-addressed envelope with $7 enclosed, to Festival Ticket Office, Statler Hilton Hotel, Buffalo. 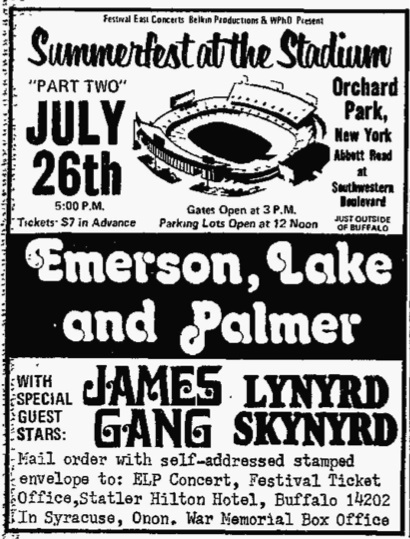 Let’s take this concert as an example and unpack the differences in the concert industry between then and now.

First off, the bill itself. The days of progressive rock bands filling stadiums are over. Prog-rock is a niche genre now – immensely popular, but not mainstream. That a heady trio of virtuosi like ELP would be joined by the earthy garage rock of the James Gang and the straight-up southern rock of Skynyrd is redolent of a different age, as well. Today, bills are genre- and demographic-specific. It’s rare to see such an eclectic mix of music in a single package.

Now think about the people willing to pay $800 for a good Billy Joel ticket. The industry in 2019 is no longer recognizable as the one that offered you three huge bands for less than $10 in 1974. It’s over.

If the Bills get a new stadium, will New Era Field become a full-time concert venue?

Highly unlikely. There just aren’t enough acts out there in the present day capable of filling the place at the price points the admittedly artificially inflated market demands.

Why isn’t (insert name of favorite artist) playing Buffalo and is instead playing Toronto or Cleveland?

Willingness of promoters to take a chance.

The fact we remain a secondary market, on a good day.

All of these conspire to keep certain acts away.

Why are concerts announced and tickets placed on sale so far ahead of the event itself?

Money. Or, more specifically, your money, and the interest it can accrue when placed into an account up to a year before showtime.

Additionally, the data suggests these extended periods between on-sale and event have increased ticket sales.

“It became quite evident that tours that had their dates on sale for an average of 150 days outperformed those who were on sale for a shorter period of time,” Bob Roux, Live Nation president for U.S. concerts, told The Kansas City Star in 2018. “Since 2014, we have worked hard to encourage tours with all or a majority of their dates in the summer months to get confirmed and to go on sale in January and February, and it seems to be working as we are selling more and more tickets every year.”

This happens in our market all the time. For example, the Black Crowes are playing Darien Lake PAC on their much-hyped reunion tour July 31, 2020. By that date, tickets will have been on sale for the better part of a year.

This will increasingly become the norm, moving forward.

What’s the deal with all the VIP packages? Are they worth it?

This is entirely a personal decision, but let’s pull it apart and take a close look.

Live Nation recently announced Kiss would bring its “End of the Road” farewell tour to KeyBank Center on Feb. 5, 2020. (This is the tour’s second play in this market, following an appearance at Darien Lake PAC in the summer of ’18.) A “Gold Package” is being offered to fans, which includes a photo opportunity with the band, assorted merchandise and merch vouchers, access to a VIP area, a bar and hors d’oeuvres. The package is priced at $1,500. It does not include a ticket. 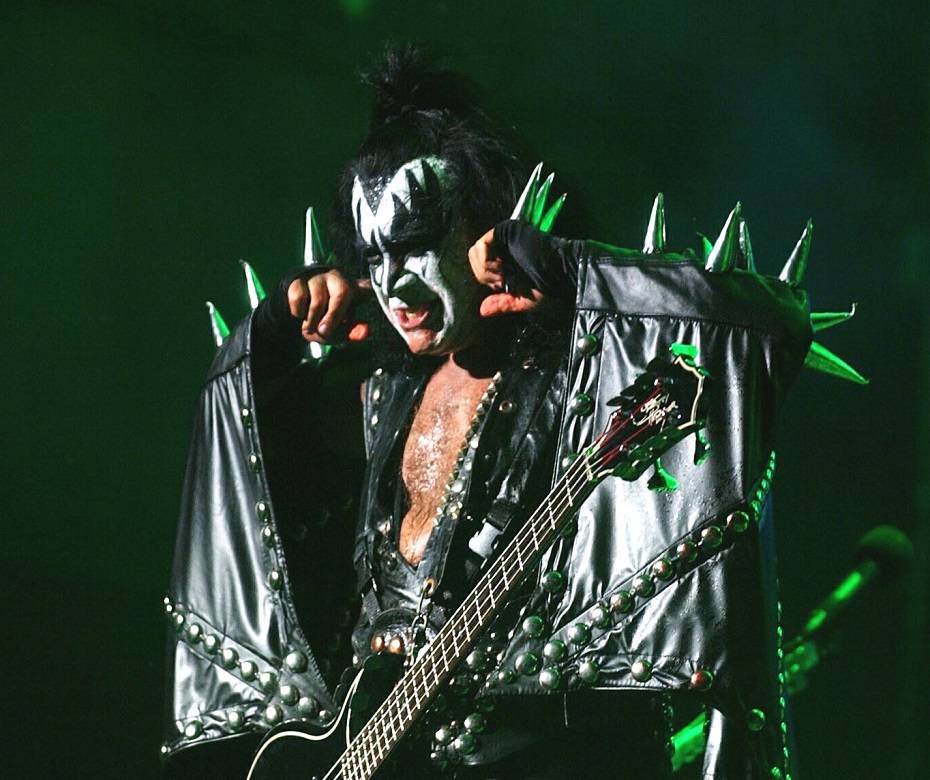 If you love Kiss enough to be considering buying a VIP experience, it’s likely you would prefer a good seat for the show. “Platinum Seating” for Kiss varies from $95 to $429 per seat, depending on how close you’d like to be. There’s a catch – the tickets are only available in sets of two. So, a pair of the best seats will cost you $858, plus a $3 processing fee.

If you have two tickets, logic suggests you’d like two VIP experiences, unless you plan to ditch your concert-mate while you schmooze with Gene Simmons. (Actually, these photo ops are run on a treadmill-like schedule, so it’s doubtful you’ll get to chat with the Bat Lizard much.)

It’s quite possible, then, for a diehard Kiss fan to be considering dropping $3,861 for a two-person VIP Kiss experience.

Is there a band you love that much?